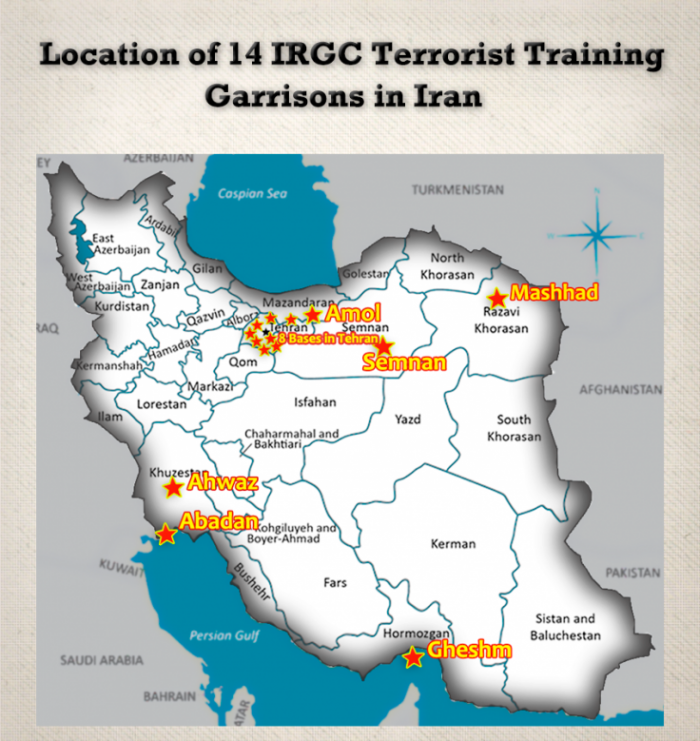 Case For Designating the IRGC as Terrorists Builds

Momentum continues to build for the U.S. to designate the Iranian Revolutionary Guard Corps a Foreign Terrorist Organization as a whole. Much of that momentum stems from the IRGC’s own actions over the years in supporting terrorism worldwide as well as initiating, supplying and controlling many of the proxy wars breaking out throughout the Middle East.

Even though there has already been well-documented disclosures about the IRGC’s illicit activities, new information continues to come to light as was the case on Tuesday when the National Council of Resistance of Iran (NCRI), a leading global organization of Iranian dissident and human rights groups, held a press conference in Washington, DC to disclose details of the IRGC’s terrorist training activities.

Alireza Jafarzadeh, deputy director of the Washington Office of the NCRI, presented information to reporters gathered by the social network of the People’s Mojahedin Organization of Iran, a dissident group located inside Iran. He said that information shows that since 2012, the NCRI has seen an increase in the training of foreign nationals in its terrorist training camps, which threatens a wide scope of countries, not just those beset by conventional warfare.

Using intelligence gleaned from sources within Iran, the NCRI claimed that the IRGC had created a training command operating dozens of military bases across Iran specializing in all aspects of warfare with units divided by national origin and specialization such as missile and naval operations to insurgency and urban warfare.

The IRGC that is answerable only to the Iranian regime’s top mullah, Ali Khamenei. It specializes in insurgency and guerilla tactics and is notorious for having supplied most of the IEDs used by Iranian-controlled Shiite militias in Iraq targeting U.S. and foreign troops; resulting in the deaths and wounding of thousands of Americans.

The IRGC was the initial unit that came to the rescue of the Assad regime in Syria as it teetered on the brink of collapse by smuggling in weapons and cash, as well as recruiting and directing Hezbollah fighters. It eventually expanded its role to include Iranian military, as well as the recruitment of Afghan mercenaries and deployment of Shiite militias from Iraq.

According to the NCRI, every month, hundreds of forces from Iraq, Syria, Yemen, Afghanistan and Lebanon — countries where the regime is involved in frontline combat — receive military training and are subsequently dispatched to the various frontlines. For operations in countries where there is no open warfare – including Persian Gulf countries, such as Bahrain and Kuwait – terrorists cells are trained instead.

The NCRI highlighted 14 IRGC training camps, as well as described the command structure, detailing how the commander of the Training Directorate, reports directly to Quds Force Commander, Qassem Soleimani.

Terrorist training for operatives from across the globe is commanded by Colonel Tahmasebi. Codenamed ‘320’, the commander of heavy weapons training at Imam Ali military base is Colonel Ali Mohammad. In charge of ‘VIP Security’ is Colonel Ramky, the NCRI said.

The sheer scale of the Training Directorate’s efficiency in producing fighters is underscored by the fact that just one of its training camps is currently sending 2,000 Afghans to Syria every week, according to the NCRI.

“The IRGC is actually the entity that runs the whole show when it comes to terrorism,” even though they are spearheaded by the Quds force, Jafarzadeh said. “You cannot do the separation. You cannot have the Quds force designated as a terrorist entity, but not the IRGC.”

Jafarzadeh said there is bipartisan support in Congress for the designation of the IRGC as a terrorist group, and suggested that with the new Trump administration, there is “a better possibility for those measures to move forward.”

The disclosures by the NCRI are significant since they provide first-hand and eyewitness accounts of the IRGC and Quds Force activities as it relates to the active support of terrorism and terror-related operations. It also points out with disturbing clarity the efforts by the Iranian regime to ramp up its military activities outside of its borders during the time it sought to portray itself as a “moderate” nation intent on resolving disputes peacefully.

Another example of those destabilizing activities has been the IRGC’s initiation of the revolt in Yemen with Houthi rebels supplied by IRGC forces; mostly smuggled aboard non-descript fishing boats in the Gulf of Aden.

Many of these ships have been intercepted and weapons confiscated by Saudi Arabian and Gulf State warships; the arms eventually traced back to Iranian factories.

Sanam Vakil, Ph.D an Associate Fellow at Catham House told IBTimes UK that the PMOI report spoke to the extent of the IRGC’s training scheme, although she could not independently verify the numbers.

“What I take from this is that this is a very sophisticated operation,” Vakil said. “Iran’s strategic strength is in a-symmetrical proxy relationships. Its conventional military is weak particularly in Iraqi and Syria they have had success in the past. Of course we also know they are the God Parents of Hezbollah.”

It is becoming increasingly clear that in order to effect the growth of Islamic-inspired terrorism abroad, the restraint of the IRGC will be a key factor. Designating it a FTO would be an important step in the right direction.