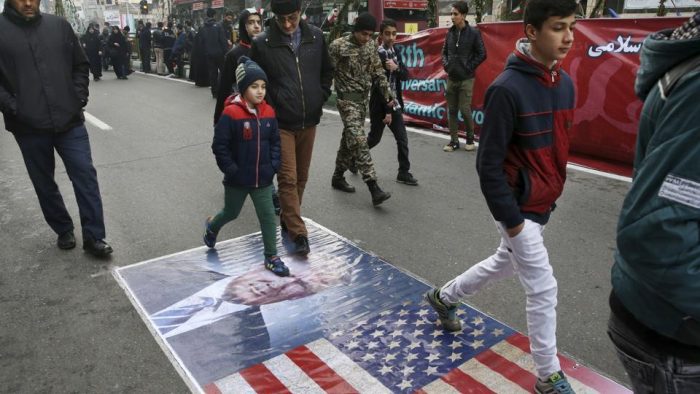 In what has to be considered one of the more absurd acts by the Iranian regime, the mullahs decided to impose their own sanctions on 15 U.S. companies for alleged human rights violations and cooperating with Israel, the state news agency IRNA reported on Sunday, in a tit-for-tat reaction to a move by Washington, according to Reuters.

The agency quoted Iran’s foreign ministry as saying the companies had “flagrantly violated human rights” and cooperated with Israel in its “terrorism” against the Palestinians and the expansion of Jewish settlements.

It was not immediately clear if any of the companies, which included defense technology firm Raytheon, had any dealings with Iran or whether they would be affected in any way by Tehran’s action, which IRNA said would include seizure of their assets and a ban on contacts with them.

The Iranian move came two days after the United States imposed sanctions on 11 companies or individuals from China, North Korea or the United Arab Emirates for technology transfers that could boost Tehran’s ballistic missile program. This was on top of sanctions levied against 30 foreign companies or individuals for transferring sensitive technology to Iran for its missile program or for violating export controls on Iran, North Korea and Syria.

Iran could face tighter U.S. sanctions over ballistic missile launches and other non-nuclear activities under a bill announced on Thursday by a bipartisan group of senators, echoing a harder line on Tehran espoused by President Donald Trump.

While the move by the Iranian regime has practically no effect on the U.S. economy, nor on the companies being sanctioned since few have any assets or business dealings with the regime, who is not on the list is telling.

Boeing for example is not on the list of firms sanctioned, even though it is one of the largest military suppliers to Israel, but also happens to be selling Iran new commercial airliners to replace its aging fleet.

It is also hypocritical for the Iran lobby and the regime to consistently oppose any new sanctions and claim they threaten the nuclear agreement with Iran, but in this case the regime has no problem in engaging in the same behavior it condemns.

We have no doubt that if any of the U.S. companies on Iran’s list wanted to sell equipment or arms to Iran, the mullahs would be eager to do business with them.

As with the constant harassment of U.S. Navy ships throughout the Persian Gulf by Iranian speed boats, the net effect is akin to a gnat bothering a bear and these sanctions are typical of the real strength of the Iranian regime which is in propaganda and visuals and not in practical effect.

It is interesting though how the Iran lobby, especially the National Iranian American Council is silent on these new sanctions since it has been so vocal about the threat U.S. sanctions would have on the nuclear deal and the future of relations between the two countries.

In fact, a casual Google search would reveal a trove of apocalyptic warnings from Trita Parsi and his cohorts at the NIAC about the damage future sanctions could bring and yet when Iran engages in the same practice there is not a signal note of dissent from them.

It is damning proof once again that the Tehran can do no wrong in their eyes and how they are solely a mouthpiece for the mullahs in Tehran.

It is also interesting how U.S. sanctions were aimed specifically for effect at Iranian Revolutionary Guard Corps leaders directly involved in ballistic missile activities or control of terrorist activities, including past actions that killed American service personnel, while these Iranian sanctions are aimed at the Israeli-Palestinian conflict.

Iran has frequently trotted out the plight of the Palestinian people as a Trojan horse to try and galvanize support within the Arab world, but it has lost much of its morale standing since it now engages in wars in Syria and Yemen that are setting Muslims to kill Muslims on a wholesale basis.

Ultimately the mullahs in Tehran care not a whit about the Palestinian people and use them in the same way they have used Afghan refugees to serve as mercenaries in Syria or Shiite militias or Houthi rebels to serve their twisted purposes.