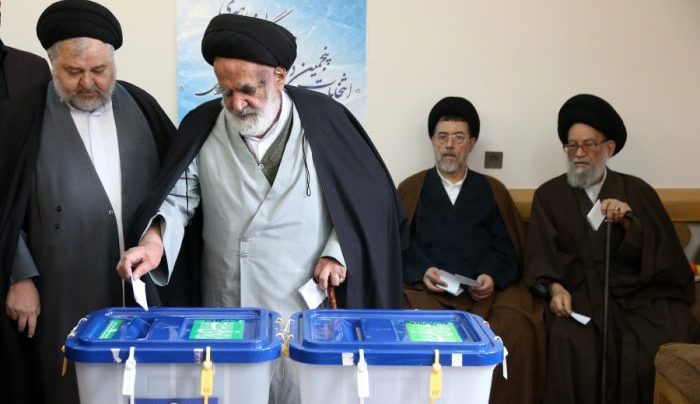 Iranian clergymen vote in the parliamentary and Experts Assembly elections at a polling station in Qom, 125 kilometers (78 miles) south of the capital Tehran, Iran, Friday, Feb. 26, 2016. Iranians across the Islamic Republic voted Friday in the country’s first election since its landmark nuclear deal with world powers, deciding whether to further empower its moderate president or side with hard-liners long suspicious of the West. The election for Iran’s parliament and a clerical body known as the Assembly of Experts hinges on both the policies of President Hassan Rouhani, as well as Iranians worries about the country’s economy, long battered by international sanctions. (AP Photo/Ebrahim Noroozi)

The Iranian regime’s presidential election is fast approaching on May 19th and with it comes expectations around the world of what the election will mean.

For the mullahs in Tehran and their overlord, Ali Khamenei, it has meant staging an election that gives the world the appearance of being fair and free, but in fact is anything but. They have even sought to create the aura of tension and debate by offering up “hardliners” to run against “moderate Hassan Rouhani.

In reality, this election—like so many others before it—has already been pre-ordained. The difference is that the mullahs learned their lesson from the disastrous 2009 re-election of Mahmoud Ahmadinejad which convulsed Iran in massive street protests that had to be put down ruthlessly and aired live on then-novel fledgling social media networks around the world.

Since then the mullahs offered up a less contentious election in 2013 with Rouhani being foisted on the world as a paragon of moderation and friendly attitudes through the removal and disqualification of any other threatening candidates to make the ballot.

The parliamentary elections last year saw a massive crackdown against journalists, dissidents, artists, students, and just about anyone else that might have Twitter on their cellphone.

Now the mullahs are staging an election where the outcome has already been pre-determined and the rest of the world just has not been clued in yet.

Slater Bakhtavar, an attorney, foreign policy analyst and political commentator, described the election farce in a piece for Forbes.

Western media are bafflingly enamored of extolling the virtues of Iran’s “free” and “democratic” electoral process, seemingly oblivious to the fact that it is neither. Anyone holding naive notions of any and all Iranians having some unalienable right to submit their name for election, then have a fair and equal chance to earn votes through rigorous campaigning and the debate of ideas, would do well to abandon such lofty fantasies, he writes.

“The actual voting process is riddled with fraud, too. The government meticulously plans initiatives to transport poor people (whose political leanings are known beforehand) to the polling stations, and official government employees are essentially ordered to vote. Tactics such as these allow officials to report enormous voter turnout numbers, pleasing journalists and maintaining the facade of Iran’s democratic international image,” Bakhtavar adds.

Bakhtavar notes how the Obama administration fell for the façade or the mullahs in supporting a flawed nuclear deal that did not reform the regime’s government and shockingly enabled the mullahs by paying cash ransoms for American hostages, thereby convincing the mullahs their path of squashing human rights was the correct one and carried no repercussions.

He does note however that the election of President Trump provides an opportunity to reset the scales with Iran and empower an Iranian dissident movement that has been under constant assault by the mullahs for three decades.

“President Trump is correct in his backing of the Iranian people, both morally and pragmatically. It has always been the right thing to do to support these oppressed people as they increasingly seek reform and the formation of a freer society, but now, in the early 21st century, the timing is perfect,” Bakhtavar said.

“New technologies exist now that allow communications on a wider scale than ever before, enabling the proliferation and exchange of new ideas and ways of thinking. Free thought is a danger to Iran’s theocratic regime, as it is to all dictatorships. These technologies are to be encouraged among the people of Iran, and those people should be afforded the dignity and respect of being addressed directly – not through their tyrannical rulers,” he added.

This explains why the mullahs spend such an inordinate amount of the regime’s time and resources to confiscating satellite dishes, blocking access to social media apps, tracking illegal online activity and trying to break the encryption of communications platforms such as Telegram and WhatsApp.

The mullahs live with the very real fear that if the Iranian people were ever able to organize and communicate effectively, especially with the outside world and dissident and human rights groups, their tenuous hold on power would slip away.

Mohammad Mohaddessin, chair of Foreign Affairs Committee of the National Council of Resistance of Iran (NCRI), one of the largest Iranian dissident groups, answered this very real concern of the mullahs.

“Over the past 38 years the clerical regime has entirely relied on execution and prison to stay in power and all regime’s officials, including Rouhani who has been one of the decision makers in the regime during this period, are directly responsible for the crimes committed,” Mohaddessin said.

To that end, the Iranian resistance movement has offered an alternative to the Iranian people dissatisfied with their choices in the election: Simply boycott the vote.

An online campaign has been picking up steam with photos of demonstrations in Iran beginning to leak out on social media of Iranians calling for a boycott of the elections.

While it’s doubtful the mullahs would even reveal the effects of any boycott since returns are usually suspected of being falsified in the first place, any boycott is a sign of growing resistance, especially in a regime where any overt act of defiance often lands one in prison or worse yet at the end of the hangman’s noose.

But some intrepid Iranians are talking to Western media about participating in such a boycott over their disgust with their choices.

“I will not vote,” said Hossein Ghasemi, a 35-year-old taxi driver who voted for Rouhani in 2013 told Bloomberg. “None of them care about our demands and difficulties linked to daily increasing prices.”

There are already warning signs on the horizon for Rouhani. A report Monday by the state-run IRNA news agency said a survey of over 6,000 eligible voters found over a third saying they would not be voting, while another 46 percent said they would pick their candidate later. It offered no margin of error on the nationwide random survey, according to Bloomberg.

We can only hope that on May 20th the full extent of the dissatisfaction of the Iranian people is heard.