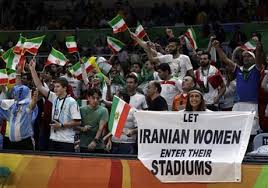 Abuses and Reach of Iranian Regime is Proof to Keep Sanctions

As protest signs go against the Iranian regime, this one was pretty tame, but the setting of where it was held aloft made for news; it was at the Rio Olympics.

Darya Safai, an Iranian-born Belgian, held aloft the sign during the men’s volleyball match between Iran and Egypt. As security personnel approached her to take down the sign, she broke into tears. Safai was allowed to stay and keep her sign and she vowed to show up—with sign—at all other matches with Iran’s volleyball team, even though the International Olympic Committee bans political statements at games.

Safai was protesting an Iranian regime edict that bans women from attending sporting events. She has lived in Belgium since 2000, after being arrested in Iran in 1999 and put in prison for taking part in anti-government demonstrations. She has been staging sports protests since 2014.

Since 2012, the Iranian government has banned women from attending volleyball tournaments as the sport became increasingly popular in Iran with both sexes.

It has arrested women for trying to enter stadiums, human rights groups say.

Her small protest is emblematic of the much larger protests and demonstrations that have become part and parcel against the Iranian regime, including a recent hunger strike staged in front of 10 Downing Street in London and the recent mass gathering outside of Paris by 100,000 human rights activists and Iranian dissidents.

The protests have stepped up as the Iranian regime has stepped up its various human rights abuses, most notably the renewal of its penchant for nabbing dual-nationality citizens without charge and tossing them into prison.

An editorial by Dr. Majid Rafizadeh, president of the International American Council on the Middle East, in Huffington Post, talked about the sharp spike in arrests of foreigners by the Iranian regime.

“Even the State Department has acknowledged the increasing threat ‘Iran has continued to harass, arrest, and detain US citizens, in particular dual nationals,” he said.

“Many believed that Iran would open up politically and socially after rejoining the global financial system and after sanctions were lifted. Rouhani encouraged the Iranian Diaspora to visit Iran without fear,” he added. “Iranian authorities use dual citizens as pawns for extracting economic concessions or receiving political and financial gains and can also use them to swap prisoners.”

The use of hostages pales in comparison though to the regime’s heavy use of executions, especially mass executions lately, to reinforce its policies of fear and dread, as described in a piece for The Hill by Shahriar Kia, a press spokesman for residents of Camp Liberty, Iraq, and members of the People’s Mujahedin Organization of Iran opposition group (PMOI, also known as MEK).

Iran is known for its skyrocketing number of executions and practice of obtaining coerced confessions through torture and other banned methods. The mullahs have also proved their “sickening enthusiasm” of sending juveniles to the gallows, all in violation of international laws and respecting no bounds in this regard, said Magdalena Mughrabi, Deputy Middle East and North Africa Program Director of Amnesty International. International law, including the Convention on the Rights of the Child to which Iran is a state party, absolutely prohibits the use of death penalty for crimes committed when the defendant was below 18 years of age. Yet apparently this is a pretext Iran refuses to respect.

“The recent execution of nearly three dozen Sunni Kurds in one day adds to Iran’s already dismal human rights history, especially in the past three years after the ‘moderate’ Hassan Rouhani came to power,” he writes.

The Iranian regime’s brutal policies have also helped serve as a breeding ground of discontent that is driving willing Sunni recruits into the arms of ISIS. Far from the public perceptions being pounded by the Iran lobby the truth is that Iran is doing more to drive ISIS’s growth than anything the West is doing.

Wahab Raofi, a former interpreter for NATO forces in Afghanistan, described such a problem in a piece for Huffington Post.

“Politicians keep taking jabs at ISIS, yet the world’s most notorious terrorist group continues to carry out spectacular, deadly attacks around the world. This is because politicians jab only at the extremities of their foe – they cannot win unless they deliver a knockout blow to the head. And that target is Iran,” he said.

“Peace-seeking governments need to pinpoint the source of the problem. Why is ISIS, for all its brutality, still able to recruit young Sunni Muslims from around the world? The path of destruction leads to the doorstep of Shiite Iran,” he added.

The Iranian regime stands as the most destabilizing influence throughout the world today and ignoring that threat under the misguided hope of gaining favor with “moderate” forces within Iran is a mistake of monumental proportions.

The fact that human rights and sponsorship of terrorism were not attached to the Iran nuclear agreement and thus the opportunity exists to reauthorize the Iran Sanctions Act, as well as maintain existing sanctions related to those areas where the regime’s conduct has been plain for the world to see.

A reminder of what the mullahs in Tehran believe in comes from an editorial penned by Barry Rosen, one of the 51 Americans taken hostage 40 years ago in the takeover of the American embassy during the Islamic revolution, in the Telegraph where he voiced his support and concern for Nazanin Zaghari-Ratcliffe, a British-Iranian aid worker imprisoned by the regime who’s health is reported to be in steep decline.

“She is a young mother of British-Iranian citizenship who has dedicated her life to aid and charity work. And, simply because she was in the wrong place at the wrong time, she has been taken from her family, and is subject to the brutality of the Iranian prison regime,” he writes.

“In 1979, the Iranians were very clear that I and the other hostages would only be released if there was a financial payment to Iran. The deal was made in 1981 and that’s why we were free. And no matter how much the agencies dress it up, the $400m that has just been paid to Iran by the US, at the same time as five Americans were released from Iranian jails, was just the same. Some $400m in foreign currency, packed onto crates and delivered to Iran on the same day as our hostages being released is a quid pro-quo that bad timing alone cannot explain,” he added.

Rosen knows the regime well and has found that in 40 years very little has changed.

“Businesses, organizations, charities and agencies that operate in Iran are at risk, and the people who work for them – especially if they have dual nationality – are in a very dangerous position. It is my deep concern that further investment in Iran will, rather than open it to the world, will actually put more dual citizens at risk; will help the country obtain nuclear weapons; and will help fund human rights abuses,” Rosen warns.

It is a warning the world would be well served to remember.