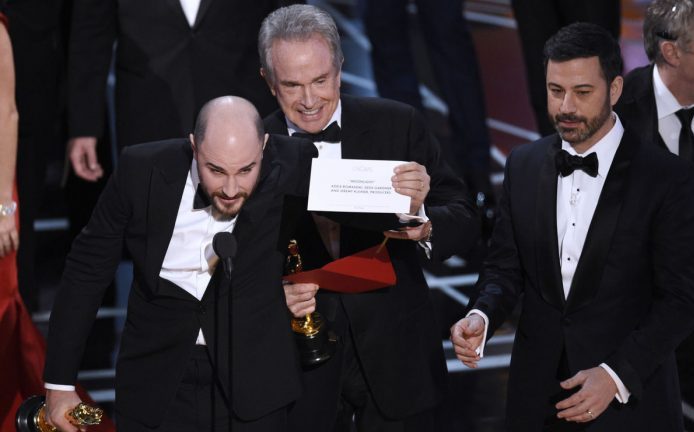 Pretty much the entire planet has seen or heard about the mistaken Best Picture announcement for “La La Land” only to find out that “Moonlight” had indeed won instead in a mistake that put Steve Harvey’s mistaken Miss Universe crowning to shame.

Aside from the stunned faces of the audience at the Dolby Theatre in Hollywood, the moment became an instant viral sensation as social media buzzed about the historic mistake, but the real shocker came a day later when the Iranian regime’s foreign minister Mohammad Javad Zarif lauded comments made by the cast and crew of the film “The Salesman” which won an Oscar for best foreign film critical of the Trump administration’s immigration visa moratorium.

Zarif tweeted out his own congratulations for the statement read for Iranian film director Asghar Farhadi who chose to stay away from the 89th Annual Academy Awards ceremony in protest over President Trump’s travel ban.

“Proud of cast & crew of ‘The Salesman’ for Oscar & stance against #MuslimBan. Iranians have represented culture & civilization for millennia,” said Zarif’s tweet.

Zarif’s tweet was met by a blistering series of responses from CNN anchor Jake Tapper who took Zarif to task for lauding an Iranian filmmaker while the regime regularly imprisons other dissident Iranian filmmakers.

On Monday, Tapper tweeted how Iran has treated filmmakers in the past, which included long jail sentences and not being permitted to leave the country for decades, according to the Daily Caller.

Tapper went on to list several prominent Iranian filmmakers who are languishing in regime prisons.

“2/Iran regularly jails its filmmakers. Such as Keywan Karimi guilty of ‘insulting sanctities’ in October 2015,” he tweeted.

“3/Jafar Panahi was sentenced to six years in prison for trying to make an ‘antiregime’ documentary,” he continued.

“4/Documentary filmmaker/women’s rights activist Mahnaz Mohammadi was jailed for collaborating with the BBC,” he added.

“6/ So FM @JZarif? The traditions of your brilliant people are being oppressed by the tyranny of your government. Tweets notwithstanding,” Tapper concluded.

Tapper correctly points out the hypocrisy of the Iranian regime when it lauds comments that support its propaganda efforts, and yet deals harshly with anyone caught criticizing the regime of stepping outside of approved cultural or moral norms.

All of which makes comments made by top mullah Ali Khamenei earlier this month even more interesting when seen in the light of Zarif’s tweets.

In a speech in the East Azerbaijan region of Iran, Khamenei said that a war on Iran’s culture and economy is more dangerous to his Islamic regime than any military threat from the West, according to Breitbart News.

“This is a blatant lie!” Khamenei said in the speech. “Why do they speak about war? They do so because they want to switch our minds to a military war, but the real war is something else.”

“They draw our attention to a military war so that we ignore this war,” Khamenei said. “The real war is a cultural war.

“There are so many television and internet networks which are busy diverting the hearts and minds of our youth away from religion, our sacred beliefs, morality, modesty and the like,” Khamenei said.

In this regard Khamenei is correct since what the mullahs abhor more than anything else is free and independent thinking it seems. Free expression and divergent opinion is met with a fury from the mullahs akin to a full scale invasion; except for the ruling mullahs an invasion of ideas seems to be more dangerous than U.S. Marines landing on the beaches of Iran.

This also explains why the regime has always been especially brutal in its crackdowns of artists, journalists, bloggers and filmmakers as a means of controlling public discourse and the flow of creativity among the Iranian people.

It also explains why the regime has worked so hard at restricting access to social media platforms and web sites judged to have anti-regime materials on it.

Inevitably though, the slow creep of the arts have proven to be a strong antidote to totalitarian thinking and we can only hope that the Academy Awards will one day be celebrating the work of an Iranian filmmaker who know sits in prison.