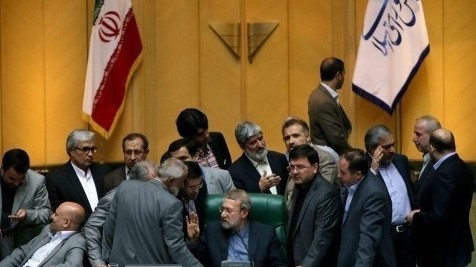 Sunday marked what has been dubbed “Adoption Day” and we’re not talking about lost puppies. This weekend marked the start of the of what the Obama administration and other members of the P5+1 called the start of showing readiness to the Iran regime in lifting economic sanctions that have held the mullahs in Tehran in check for the past decade.

In a memo, President Obama directed the secretaries of state, treasury, commerce and energy “to take all necessary steps to give effect to the U.S. commitments with respect to sanctions described in (the Iran deal).”

This will be followed by “Implementation Day” on December 15 in which the U.S. and its partners will begin the actual process of lifting sanctions against the regime after certification by the International Atomic Energy Agency that the regime has lived up to its commitments to curb its nuclear program.

For the Iran regime, Sunday also marks the “put up or shut up” moment for the mullahs in which the regime will have to begin the process of dismantling parts of its nuclear program, including decommissioning nearly 15,000 centrifuges, converting its Arak heavy-water reactor so that it will produce less plutonium and reducing its stockpile of enriched uranium 98%. U.S. officials expect it will take about six months.

Ali Akbar Salehi, the head of Iran’s Atomic Energy Organization, told Iranian state television Sunday that the country would begin taking its next steps under the deal—including reducing the number of uranium centrifuges in operation, and removing the reactor core at the Arak facility—in short order, according to the Wall Street Journal.

But the real question is will the regime move aggressively forward in order to recoup frozen assets and foreign investments needed to stave off economic disaster from corrupt mismanagement at the hands of the mullahs, or will the regime simply slow walk changes while providing its usual propaganda lip-service, supported by loyal Iran lobbyists such as the National Iranian American Council, and stonewall any real changes?

Already we’ve seen efforts by the Obama administration and United Nations to provide some cover for the regime even as the mullahs have undertaken provocative steps in the wake of adopting the nuclear deal.

The most notable action has been the military buildup in Syria, including the mobilization and commitment of Iranian troops directly into the fight and coordination in drawing in Russia to fight the fights the Iran regime has been unable to win so far in support of the Assad regime.

This has been followed by the reported conviction of Washington Post reporter Jason Rezaian for espionage (ironically announced on the exact same number of days Iran held the 52 American embassy hostages), and the launching of a new ballistic missile design that has been denounced as a violation of UN Security Council resolutions banning the Iran regime from pursuing ballistic missile designs that could be used to deliver nuclear payloads.

U.S. Ambassador to the U.N. Samantha Power stopped short of any confrontational rhetoric, affirming Wednesday that the test violated a U.N. Security Council resolution “if the facts are as we believe them to be.” Iran has always considered such resolutions to be invalid and has violated their provisions numerous times since they were adopted in 2010. The Iranian government also denies the ballistic activity violates the Joint Comprehensive Plan of Action, the formal name for the nuclear agreement.

The fact that the U.S. recognizes that the regime has already violated the UN agreement, yet opts not to confront the regime is indicative of what lies in store for us as the regime continues to make its aggressive and increasingly desperate moves throughout the Middle East.

The regime’s actions are remarkably similar to moves made by North Korea as it first agreed to restrictions on its nuclear program, only to continue advancing it in secret until it tested fully functional nuclear weapons in spite of successive efforts to sanction North Korea after the fact with no effect.

The mullahs in Tehran have watched and learned what Pyongyang did in steering tis nuclear program past international sanctions, which may be why Iran unveiled to the world video of once-secret underground missile bunkers where it stored its arsenal of mobile missile launchers.

The most significant aspects of the revelation by the regime are that: a) no one knew about these secret bunkers; and b) that the bunkers hint at the size and scale of secret military facilities that have hardened against attack by being buried as much as 500 meters under a mountain range.

Why this is important is that it basically invalidates significant sections of the nuclear agreement dealing with limited inspections only of “known” facilities and not allowing inspections of military sites. It also puts into proper perspective the nefarious nature of the regime as it hides most aspects of its military capabilities.

According to the Daily Beast, “while details about the alleged 500-meters-down subterranean base are few and difficult to confirm, the bunker and others like it could upset the delicate military balance between the United States and Iran as the two countries move forward on an agreement to limit Tehran’s nuclear program in exchange for a gradual easing of economic and military sanctions targeting the Islamic regime.

“That’s because any facility a quarter mile below ground is way too deep for America’s existing bunker-busting bombs to directly destroy in the event Iran reneges on the nuke deal and tries to put atomic warheads on its long-range rockets,” the Daily Beast reported.

Then again, given the regime’s penchant for hyperbole, bluster and outright fabrication in order to make itself seem more militarily formidable than it really is, all of this could simply be fakery.

That begs the question of whether or not the U.S. and its allies should be making the $150 billion bet that the regime is a sheep in wolves’ clothing.

The people that know the regime best, the dissidents and members of the resistance movement worldwide, should be the ones we should be taking our cues from and in their view, the nuclear deal has only emboldened the Iran regime in its march towards oppression.