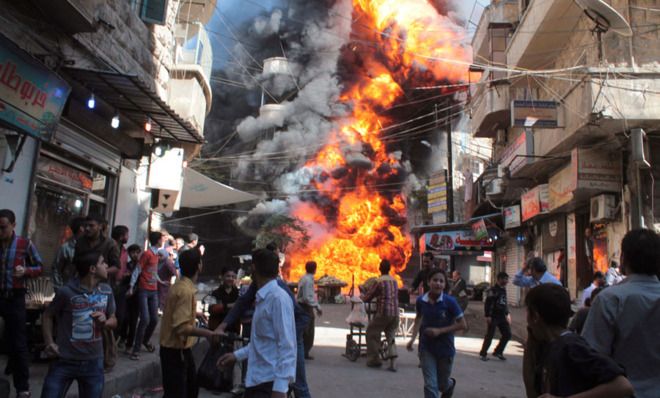 After Syria Strike Next Move Should be Pushing Iran Out

You can almost pinpoint to the day when things turned really bad in Syria. For much of the fall and spring of 2012-2013, the Assad regime was on the ropes from a series of victories by rebel forces including the loss of a key airbase and provincial capital.

The Syrian army suffered from several publicized defections of key leaders and the rebel coalition had grown significantly around moderate groups backed by the U.S.

Then in April of 2013, the Iranian regime directed its terrorist proxy Hezbollah to join in the fray, along with advisors and commanders from the Iranian Revolutionary Guard Corps. Coupled with a massive influx of cash and weapons, the restocked Syrian army launched a series of counteroffensives that began to turn the tide.

Up until that point, the rebels had pushed to within eyesight of Damascus and Assad was frantically figuring out where his exile should take place.

For the mullahs in Tehran, it was an equally scary time as its major Shia partner was about to fall.

But with the reinforcements and direct intervention by Iran, the tide of the war changed and with it the situation we are now mired in.

Not only did Syria alongside Iranian forces fight rebels, they specifically targeted, moderate Western-backed units in order to decimate their numbers and leave only radical Islamic groups on the battlefield forcing the U.S. and its allies to pick between a certifiable mass murderer in Assad or groups such as ISIS and Al-Nusra.

It was a clever strategy and one that worked too well given the Obama’s support of the corrupt Al-Maliki government in Iraq, preserving ISIS at a critical time when its numbers were small and lacked cash and weapons. It gained both when it exploited the divided government in Iraq; split apart by Iranian regime’s insistence on a Shia only leadership thereby pushing some of the Sunnis straight into the waiting arms of ISIS and leading directly to the blitzkrieg that toppled Mosul and delivered ISIS its first major victories.

Less than two years later, as Iran was again on the ropes with its resources depleted and rebel forces on the verge of breaking out again in Syria, Iranian mullahs took the step of begging Russia to intervene and save its proverbial goat, which Vladimir Putin was all too happy to oblige, sensing an opportunity to preserve its naval base on the Mediterranean while filling the power vacuum left by the Obama administration’s total withdrawal from the region.

But President Trump’s decision to retaliate against Syria for the use of chemical weapons changed the game plan entirely and now raises the question of how to best move forward?

There is no doubt that the most desirable solution in Syria is a diplomatic one, but focusing on removing Assad from power is only treating the symptom. The real sickness that afflicts Syria is the presence of the Iranian regime there; it is so embedded many Syrians have taken to view Iranian soldiers as an occupation force.

By removing Iran from Syria, the situation resolves itself in a myriad of ways: Russia would lose its key partner on the ground; A peace deal with rebels will definitely prevail; and the Syrian people would have the chance to choose their own destiny.

It would also allow for the repatriation and resettlement of the four million refugees that have fled Syria since the war began.

And the key to pushing Iran out of Syria lies within supporting—fully—the dissident movement within Iran itself.

“The regime’s survival is now dependent on unsteady security services and the power of patronage, which ebbs and flows with the price of oil. Iran’s continuing stage-managed elections and colorless apparatchiks, including President Hassan Rouhani, a founding father of the feared intelligence ministry who mimics reformist slogans, have failed to convince, much less inspire,” they said.

“Today, the Islamist regime resembles the Soviet Union of the 1970s — an exhausted entity incapable of reforming itself while drowning in corruption and bent on costly imperialism,” they added. “If Washington were serious about doing to Iran what it helped to do to the USSR, it would seek to weaken the theocracy by pressing it on all fronts. A crippling sanctions regime that punishes the regime for its human-rights abuses is a necessity. Such a move would not just impose penalties on Tehran for violating international norms but send a signal to the Iranian people that the United States stands behind their aspirations.”

Re-prioritizing human rights as a dominant issue with Iran moving forward would place the U.S. back on the moral high ground that the Obama administration vacated and serve as an effective counter to the ceaseless arguments made by the Iran lobby opining about potential economic benefits of trade with Iran.

A new report by human rights group Amnesty International showed that Iran remained a dominant executioner of its own people, second in the world only to China, which makes hammering the regime on human rights all the more critical.

That emphasis on human rights was boosted by the European Union’s decision to extend sanctions until April 2018 on Iran for “serious human rights violations.”

The bloc has also extended by a year its travel ban and an asset freeze on 82 Iranian people and one entity, as well as a ban on exports to Iran of equipment for monitoring telecommunications and other gear that “might be used for internal repression.”

Sir David Amess, a member of the British Parliament, pointed out in an editorial in the Washington Examiner that the key to confronting Iran ultimately is to cut off the IRGC’s commerce as outlined by a leading Iranian dissident group.

“The National Council of Resistance of Iran (NCRI) specifically identified the sites of some 90 docks operated exclusively by the IRGC within Iranian ports. The information was obtained from the network of the People’s Mojahedin Organization of Iran (PMOI/MEK), which has assets within the clerical regime and the IRGC itself and made international headlines in 2002 when it revealed key details about the regime’s nuclear program,” Amess said.

“Iran’s destabilizing regional influence and its subversive activities will only be diminished if the domestic and international power of the IRGC is confronted and constrained, first through the rightful designation of the organization as a terrorist organization and then through the sanctioning of all its economic activities followed by financing regional conflicts and threats against the West,” he added.

Ultimately the U.S. should use its influence to specifically diminish the IRGC and its influence in Syria if there is ever to be any hope of a lasting peace there.