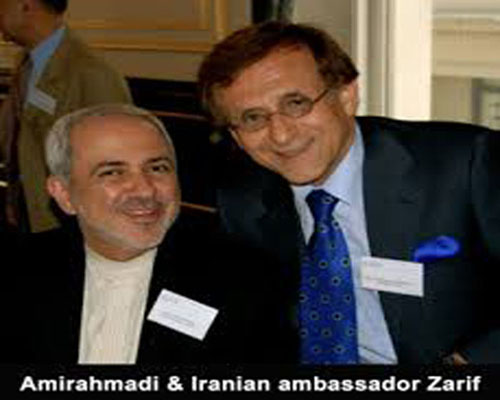 Hooshang Amirahmadi,[1] a dual US-Iranian citizen and professor at Rutgers University, teamed up in 1997 with America’s largest oil companies to create the American-Iranian Council (AIC), a non-profit organization to promote the removal of US sanctions on Iran.[2]

Amirahmadi had earlier participated in conferences on US-Iran relations and usually presents Tehran’s position.[3]  He also often comes to the regime’s defense when it was attacked in news stories.

As an example, in 1994 Amirahmadi admonished US Secretary of State Warren Christopher for labeling Iran an “international outlaw,” following its bombing of a Jewish center in Buenos Aires, which killed 85 people and injured hundreds others.  Christopher said, “Groups like Hezbollah that wreak havoc and bloodshed must be defeated.  And Hezbollah’s patron, Iran, must be contained.”[4]

Amirahmadi retorted, “A catch phrase of the nature of ‘outlaw nation’ smacks of a discredited ‘do as we say’ cold-war brand of international policy, not the true diplomacy required in these sensitive times when the United States is, or should be, an equal player on the global stage.”[5]

AIC has been bankrolled by the who’s who of America’s big oil companies, including ARCO, Aramco, Ashland Oil, Conoco, Exxon, Mobil, Shell, and Unocal.

For a brief period it looked as if US oil companies might gain access to Iran’s oil market, but then Congress intervened.  In 1995, Conoco – after three years of negotiations – announced it had been awarded a contract by Iran to develop two oil fields in the Persian Gulf.

The news met the disapproval of members of Congress.  US Senator D’Amato (R-NY) introduced legislation to block the contract, stating, “We are subsidizing Iranian terrorism by purchasing their oil and it has to stop.”[6]

Since 1984, Iran has been on the list of state sponsors of terrorism.  The Iranian regime views terrorism as a legitimate tool to accomplish its foreign policy objectives.  Beginning in the early 1990s, it gained the dubious distinction of being the world’s most active supporter of international terrorism.

Among its many terrorist strikes, Iran instigated the March 1992 suicide bombing of the Israeli embassy in Buenos Aires, which killed 29 people and wounded nearly 250 others.  Iran financed Sheik Abdel-Rahman, the blind cleric who masterminded the 1993 attack on the World Trade Center in New York City.  And the regime was behind the bombing of the Jewish center in Buenos Aires.

Ten days after Conoco announced the contract with Iran, President Clinton signed an executive order banning US investments in the development of petroleum resources in Iran.

US Undersecretary of State Peter Tarnoff explained in November 1995, “A straight line links Iran’s oil income and its ability to sponsor terrorism, build weapons of mass destruction, and acquire sophisticated armaments.  Any government or private company that helps Iran to expand its oil must accept that it is contributing to this menace.”[7]

In 1996, the US enacted legislation – with a five-year sunset clause – that imposed economic sanctions on companies doing business with Iran and Libya.

US oil producers and other businesses were displeased to be shut out of Iran.  Working with the National Foreign Trade Council, they established USA*Engage in 1997 to lobby against the “ineffectiveness of unilateral economic foreign policy sanctions.”  And they reached out to Hooshang Amirahmadi and helped him establish AIC.

Like other anti-sanction groups, AIC minimizes the military and terrorism threat posed by the Iranian regime.  Amirahmadi suggests that all foreign policy conflicts between the US and Iran’s mullahs can be resolved through dialogue.

Amirahmadi completely disavows evidence of Iran’s support of terrorism, as well as terrorist attacks by its surrogates, Hezbollah and Hamas, both of which are on the US State Department’s list of Foreign Terrorist Organizations (FTOs).

Attacks by Hezbollah, according to the State Department include:

[T]he suicide truck bombing of the US Embassy and US Marine barracks in Beirut in 1983; the US Embassy annex in Beirut in 1984; and the 1985 hijacking of TWA flight 847, during which a US Navy diver was murdered.  Elements of the group were responsible for the kidnapping, detention, and murder of Americans and other Westerners in Lebanon in the 1980s.  Hezbollah was implicated, along with Iran, in the 1993 attacks on the Israeli Embassy in Buenos Aires…Two other attacks against UNIFIL peacekeepers – an attack in late July that wounded six French citizens and a second attack days later that injured three other French soldiers – were believed to have been carried out by Hezbollah.  Also in 2011, four Hezbollah members were indicted by the UN-based Special Tribunal for Lebanon (STL), an international tribunal investigating the 2005 assassination of Lebanese Prime Mininister Rafik Hariri…On January 12, Thai police detained a Hezbollah operative on immigration charges as he was attempting to depart Thailand from Suvarnabhumi International Airport.  He led police to nearly 10,000 pounds of Urea-based fertilizer and 10 gallons of liquid ammonium nitrate in a commercial building about 20 miles south of Bangkok….In 2012, Hezbollah stepped up the pace of its terrorist plotting, and was implicated in several terrorist plots around the world….[8]

The attacks by Hezbollah and Hamas, according to Amirahmadi, are legitimate “resistance movement” activities and not terrorism.  It is the “double understanding of terrorism,” Amirahmadi posits, that “hinders” Iran’s relations with the West.

Amirahmadi’s solution?  “I think Iran and Western countries should meet to discuss what they mean byterrorism,” Amirahmadi said. “They should come to an arithmetical meaning in the definition of terrorism.”[10]

[1] Amirahmadi lived and worked in Iran until 1975, and then traveled to the US to attend graduate school.