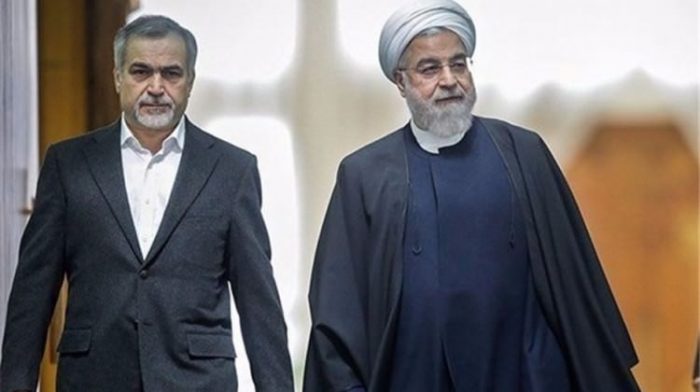 Arrest of American and Brother of Rouhani Signals Chaos Inside Iran

Just when you think things can’t get crazier inside the Iranian regime, the mullahs fooled us again by announcing a pair of actions this weekend including the arrest of the brother of regime president Hassan Rouhani on corruption charges and the sentencing of a Chinese-American college student to a shocking 10-year prison term for espionage.

Both incidents point to what has clearly become a struggle for power amongst the various factions inside the regime, but unlike what the Iran lobby has characterized a battle between “hardline” and “moderate” factions, the fight is between groups seeking to preserve their slice of the ill-gotten gains being milked from the economy.

It is important to remember that the Iranian regime is one of the most corrupt and least transparent on the planet. It has virtually no independent news media—having jailed almost all dissenting journalists in the run-up to last year’s parliamentary elections—and the bulk of its economy is controlled by the Revolutionary Guard Corps and the families of the ruling mullahs through a series of shell companies.

Together, these elements stifle dissent and criticism, especially focusing on brutally putting down any economic protests such as over low wages, lack of jobs or corporate corruption. None of that has stopped the near constant occurrence of demonstrations that take place on an almost daily basis throughout Iran from disgruntled small business owners, coal miners, unemployed women and unhappy students with few job prospects.

Rouhani’s brother, Hossein Fereydoun, was taken into custody and is eligible for bail, Tasnim news agency cited regime judiciary spokesman Gholamhossein Mohseni-Ejei as telling reporters on Sunday. Mohseni-Ejedi did not elaborate on why Fereydoun, who served as an aide to the president during nuclear talks that led to the 2015 agreement between Iran and world powers, was arrested.

In the recent presidential election where Rouhani was re-elected, the results were seen as a sharp rebuke of top mullah Ali Khamenei’s choice in Ebrahim Raisi, who’s candidacy was hurt by revelations of his participation as a member of a “death commission” that ordered the execution of over 30,000 Iranian men and women perceived as dissidents and political opponents in 1988.

The irony of Fereydoun’s arrest coming on the second anniversary of the Iran nuclear deal was apparent since many within the IRGC feel Rouhani has not been able to deliver on all of the promised ill-gotten financial windfall promised with the deal; even though the billions that were delivered were squandered by the regime in fueling proxy wars in Syria, Iraq and Yemen and lining the pockets of prominent IRGC commanders and their families.

All of which points to the dog-eat-dog nature of the current fight as regime leaders fight for cash the way starving dogs fight over a bone or scraps from the dinner table.

The fact that Iran’s economy remains stagnant is not a reflection on the nuclear deal since it did indeed deliver billions in cash to the regime, but rather to the incompetence and corruption rooted deeply within the regime leadership.

Fereydoun’s arrest on corruption charges is then the ultimate irony since if the claims being made of using his influence to place colleagues in high-paying positions such as being the heads of banks are true, the accusers within the regime have committed the exact same crimes over and over again.

Meanwhile, Mizan news agency, the mouthpiece of Iran’s judiciary, identified the American as Xiyue Wang, a 37-year-old researcher at Princeton University. Wang, who was born in China, was arrested in August 2016 while trying to leave Iran, the report said.

Mizan reported that Wang had “digitally archived” 4,500 pages of Iranian documents for foreign research institutions, including Princeton and the British Institute of Persian Studies.

The news agency published screenshots of Wang’s Princeton web page and an excerpt of a March 2016 report from the British institute that quoted Wang as saying he had been in contact with “senior scholars” at Iranian government archives in Tehran and Mashhad.

Mizan cited the statement as evidence that Wang was on a covert mission, even though the institute’s report was publicly available.

His case is reminiscent of the case of at least three Americans who are still imprisoned in Iran. Baquer Namazi, 80, and his son Siamak are serving 10-year sentences in Tehran’s notorious Evin prison and are believed to be in ill health. Karan Vafadari, who owns an art gallery in Tehran, was arrested last July with his wife, a U.S. green card holder.

A fourth American, Gholamrez Reza Shahini of San Diego, was sentenced to 18 years in prison on national security crimes but has appealed the judgment and is free on bond.

The U.S. government has repeatedly called for the Americans’ release. An unknown number of Iranians holding European passports are also believed to be jailed, according to the Los Angeles Times.

“We call for the immediate release of all US citizens unjustly detained in Iran so they can return to their families,” the State Department said on Sunday.

The arrest of the Princeton student is similar to North Korea’s arrest of university faculty and academics, making them targets of convenience.

The recent turmoil within the Iran regime and the continued arrest of American citizens will undoubtedly provide even more fuel for a Congressional push for new economic sanctions on the Iranian regime.

We only hope it comes before more Americans are tossed into Evin prison.