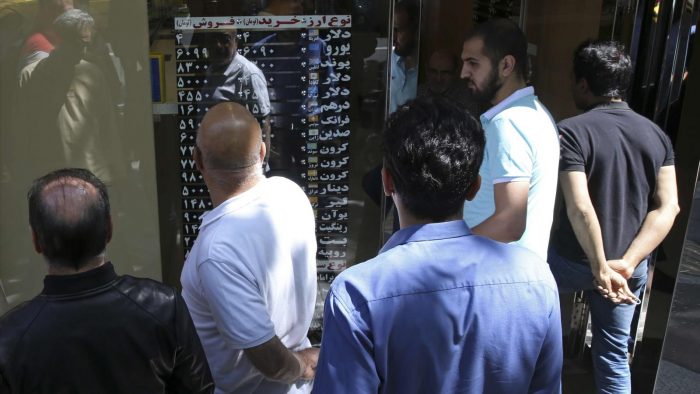 As Currency Plummets the Iran Regime Teeters on Collapse

Iran’s currency, the Rial, is on a skydive plummet downward to historic levels and poses the most significant threat to the stranglehold the mullahs have had on the Islamic state.

Pegged to the price of petroleum, the Rial has been rocked by the global glut of oil and a stagnant economy riven through by rampant corruption and the diversion of billions of badly-need dollars to fund wars in Syria, Iraq and Yemen as well as a massive military build-up including a ballistic missile program.

Now as Iran has been gripped by rising political tension with massive demonstrations sweeping across the country since last December, there has been a rush to the banks as Iranian citizens desperately try to cash out and swap to scarce U.S. dollars in a scene reminiscent of bank runs during the Great Depression.

The Rial has bled away a third of its value just this year alone with an exchange rate of 60,000 Rial to a single dollar. The track record for the mullahs in fiscal management is pretty rancid ever since the Iranian revolution in 1979 when one dollar bought 70 Rials.

Since Hassan Rouhani assumed power in 2013, 36,000 Rials equaled one dollar. The drop in value is as much a reflection of Iranians lack of confidence in their government as it is of an economy that is nearing Third World status.

The mullahs have reacted in their typical brutal manner setting an official exchange rate of 42,000 Rials to the dollar in an example of wishful thinking. To enforce that rate, the mullahs have promised harsh punishment including arrest for anyone trying to exchange Rials at a different rate than the one established by them.

The crisis is driven by an inability to access physical currency notes, which are estimated at only five percent of all foreign currency in Iran, while the rest is available in the form of credits for business and the government.

Long gone it seems are the images of pallets loaded down with dollars and euros being unloaded from airplanes as part of the ransom payment made by the U.S. in exchange for U.S. hostages as part of the Iran nuclear deal.

That nuclear deal has failed to deliver the benefits promised by Rouhani to ordinary Iranians; instead the regime has siphoned the economic relief it brought to state-owned industries and the powerful Revolutionary Guard Corps.

It has also failed to generate the flood of foreign investment promised by Rouhani with many foreign companies unwilling to risk capital in investments in Iran when the U.S. has contemplated additional sanctions for the regime’s abysmal human rights record and its involvement in the support of terrorism and the war in Syria.

The use of chemical weapons repeatedly by the Assad regime against its own citizens has also ostracized Iran for its support of Assad and the heavy use of Iranian military units in the conflict.

The sponsorship of the revolt in Yemen and support of Houthi rebels has also ignited another potential regional conflict with Saudi Arabia and brought the U.S. and Russia into contentious situations that could possibly start a wider war rattling any potential investors.

Other efforts by the Iranian regime to bring in more foreign currency include trying to increase oil production in order to generate more sales overseas, but that has been stymied by fields utilizing outdated equipment and failure to attract any significant foreign partners to develop oil fields.

“This currency crisis is another step in the collapse of the Iranian economy, which was expected to rebound after the signing of the nuclear agreement. Difficult economic conditions brought protestors to the streets in a number of Iranian cities earlier this year, however those protests were quelled by the government. It is important to continue watching the economic situation in Iran, because historically economic issues have typically led to the most significant political unrests in that country,” wrote Ellen R. Wald, a historian and scholar at the Arabia Foundation.

The regime hasn’t been helped by action this week by the European Union to extend sanctions on Iran over human rights violations in an effort to demonstrate its willingness to the Trump administration to hold Iran accountable, while trying to preserve the nuclear agreement.

France has pushed for new sanctions over Iran’s missile program and involvement in conflicts in the region, including in Syria where Tehran backs President Bashar al-Assad. Paris hopes that would show President Trump the EU takes his concerns seriously.

The Foundation for Defense of Democracies, offered in an editoRial in The Hill that the collapsing Rial represented an opportunity to apply even more pressure on the regime.

“The White House should re-impose sanctions on the Central Bank of Iran to vindicate currency traders’ fear that it now plans to inflict serious damage on Tehran’s economy,” they write.

“Based on our analysis of the Central Bank data, Iran’s currency has lost roughly half of its value, 46 percent, falling from 40,170 to 58,880 per dollar, since Trump put the future of the nuclear deal in doubt last October.  The Iranian economy looked particularly wobbly amidst protests in December when Iranians took to the streets to protest the regime-controlled banking sector, and lack of economic opportunity and political freedom,” they added.

They believe that additional pressure on Iran’s Central Bank could be the nudge necessary to send it into collapse and bring down the regime.

“Under the sanctions law applied prior to the nuclear deal, foreign financial institutions are generally prohibited from engaging in transactions with the Central Bank. In effect, the Bank’s foreign-held accounts are put on lock down, barring the regime from accessing its foreign exchange reserves.  On paper, Iran may get paid for its oil but the money sits in the purchaser’s country and is only available for Iran to buy goods from that country in the local currency. Without access to these reserves, the regime would find it much harder to defend the Rial,” the article said.

The proverbial hammer blow this would deal to the regime is significant since the Central Bank provides the funding for the Revolutionary Guard Corps and supplies the cash for its activities in Syria, Iraq and Yemen.

The irony is that the regime can be crippled without canceling the nuclear deal as the Iran lobby has feared and instead using the Rial as a leveraged weapon against the mullahs by hitting them where it hurts; wiping out popular support from the Iranian people.

Remember, the original revolution against the Shah was largely fueled by economic concerns before it was stolen by the mullahs. Wouldn’t it be delicious to see the same thing happen to them?