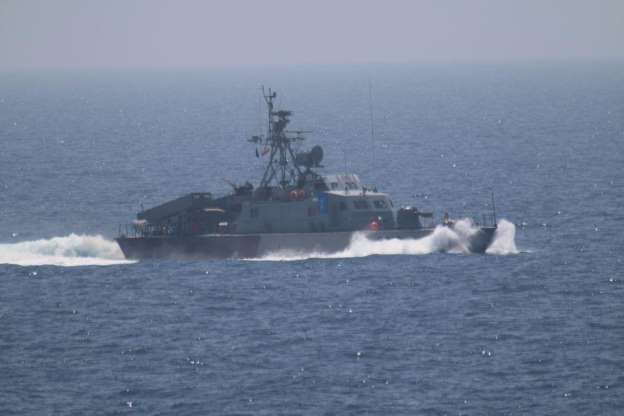 As Iran Warns Against US Aggression Its Navy Targets US Vessels

The Iranian regime’s leadership kept up its steady drumbeat of issuing warnings against any U.S. military action against the mullah’s regime. Those warnings have come to encompass not only direct U.S. action, but also any potential for action through American allies such as Saudi Arabia.

Iran’s mullahs regard President Donald Trump’s recent sale of $110 billion in new arms to the kingdom as an existential threat no different than if the U.S. decided to launch airstrikes at Tehran.

Describing the U.S. arms agreement with Saudi Arabia as “unprecedented,” Maj. Gen. Yahya Rahim Safavi, a senior adviser to top mullah Ali Khamenei, warned the Arab states not to forget the fate of former Iraqi dictator Saddam Hussein and former Shah of Iran Mohammad Reza Pahlavi, who was toppled in 1979, in a not-too-subtle jab at its neighbors.

“The volume of weapons purchased by the Arab countries — and especially Saudi Arabia — is unusual, and the signing of a $110 billion arms package between the US and Saudi Arabia and the arms sale will not contribute to the security of southwest Asia, and it will also be used to make the region unsafe and create tension in an area that is the heart of the world’s [source of] energy,” Safavi said.

The irony in the Iranian regime warning of causing regional instability is laughable if it wasn’t so tragically true. Iran’s use of its own military in Syria and Iraq, along with proxies in both countries as well as Yemen has turned the Middle East into an abattoir.

His remarks underscored a steady ramp up in potentially dangerous encounters between Iranian and U.S. military forces in the Syrian conflict, in Iraq and in the Persian Gulf.

Another such incident took place in the international waters of the Strait of Hormuz, a common hot spot for Iranian aggressiveness.

An Iranian Navy vessel has prompted ire from the U.S. military after an “unsafe and unprofessional” test of its capabilities on a U.S. helicopter.

According to a U.S. military statement, the vessel used an on-board laser against a U.S. Marine Corps CH-53E helicopter, moving above a trio of U.S. naval ships, transiting the strait.

The group was crossing the strait when an Iranian military vessel approached one of the three—the amphibious assault ship U.S.S. Bataan. The two came within 800 yards of each other, with the guided-missile destroyer U.S.S. Cole and dry cargo ship U.S.N.S. Washington Chambers not far away, Bill Urban, a spokesman for the US Navy’s Fifth Fleet said.

“The amphibious assault ship USS Bataan (LHD 5), guided-missile destroyer USS Cole (DDG 67) and dry cargo ship USNS Washington Chambers (T-AKE-11) were transiting the strait when the Iranian vessel paralleled the U.S. formation, shining a spotlight on Cole. Shortly thereafter, the Iranian vessel trained a laser on a CH-53E helicopter that accompanied the formation. The Iranian vessel then proceeded to turn its spotlight on Bataan, scanning the ship from bow to stern and stern to bow before heading outbound from the formation,” Urban said in a statement.

The aircraft’s presence prompted the Iranian boat—a missile boat according to one defense official speaking to CNN on the condition of anonymity—to point its targeting laser toward it. The same official said that not only does this fly in the face of safety protocols, but it also set off the CH-53E’s automatic defense system, firing flare signals.

“Illuminating helicopters with lasers at night is dangerous as it creates a navigational hazard that can impair vision and can be disorienting to pilots using night vision goggles,” Urban said.

According to U.S. Navy records, 2016 yielded 35 incidents of unsafe or unprofessional behavior by Iran’s navy alone—although the “vast majority” took place in the first half of the year.

There have been incidents this year too, including in January when the guided-missile destroyer USS Mahan fired three warning shots at four Iranian fast attack boats in the Strait of Hormuz. Another “unprofessional but also provocative” maneuver by the Iranians happened in April, the U.S. said according to CNN.

Incidents on the high seas were not limited to U.S. warships as Iranian-backed Houthi rebels in Yemen claimed to have attacked a Saudi-led coalition warship near a strategic Red Sea waterway, China’s state-owned Xinhua News Agency reported Wednesday.

The reported attack took place off the coast of the Yemeni city of Mocha, about 60 miles north of the Bab al-Mandeb Strait. An estimated 4.7 million barrels of oil pass daily through the strait, which links the Gulf of Aden to the Red Sea.

“The navy of the army and popular forces on Wednesday targeted a warship belonging to a Saudi-led coalition while it was carrying out hostile acts off Mokha coast of Taiz province,” a Houthi military official was quoted as saying by the Houthi-affiliated Saba news agency.

Al Massira TV, which is also linked to the Houthis, reported that “the navy forces of the national army fired a missile targeting the enemy coalition warship at the Red Sea early morning of Wednesday.”

Iranian shipments of weapons to the Houthis have been repeatedly intercepted by U.S. naval forces. The shipments included thousands of rifles, RPGs, anti-tank missiles, and other light and medium arms. Iran has openly acknowledged its support for the Houthis, and in early March 2015, Lebanon’s NOW Media reported that Houthi fighters were receiving training in Syria on behalf of Iran.

The increasing tempo of Iranian aggression prompted the U.S. military to deploy a truck-mounted missile system into Syria, an official said Wednesday, to a forward operating group of rebels and US military advisers that have repeatedly clashed with government forces.

The deployment raises the stakes in eastern Syria, where Iranian-sponsored pro-government forces have outflanked US advisers and rebels holding the Tanf border crossing to establish their own link to Iraq for the first time in years.

Shifting the HIMARS missile system into eastern Syria from Jordan will give the US a precise, long-range weapon to protect its advisers and allies in Tanf, and to attack ISIS militants further downfield. It has a range of 186 miles.

With the recent provocative activities in the region, it is now clearer that there will not be any change in the behavior of the Iranian regime’s aggression in the region, after Rouhani has been “elected” for the second term.