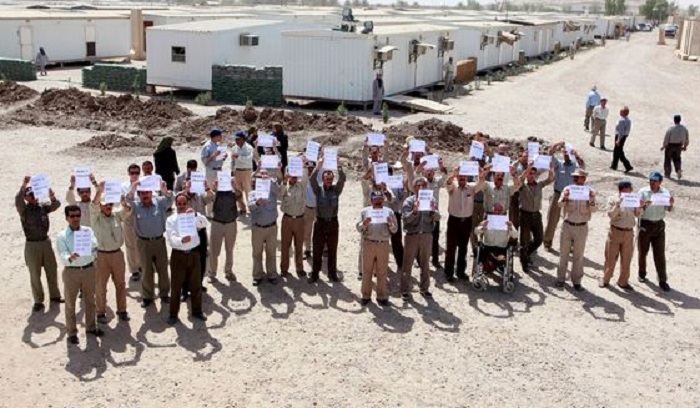 Things got a little weirder and much worse in Syria as Russia launched a barrage of cruise missiles at targets in Syria, only to have them land in presumptive ally Iran’s territory as reported by CNN. U.S. Defense Secretary Ashton B. Carter sharply criticized the Russian move which came without advance notice or warning.

Significantly the official Iranian regime state media did not issue any statements acknowledging the gaffe except for a short statement criticizing the CNN report and calling it “psychological warfare.” An interesting choice of phrase since the mullahs would be hard pressed to explain to the Iranian people why the ally Qassem Soleimani, the head of the regime’s Quds Forces, recruited ended up dropping bombs on Iran.

The Iranian role points to the influence of the country, which is the strongest backer of Syrian President Bashar Assad and is close to the Shiite-led leadership in Iraq’s U.S.-backed government.

Meanwhile, key lawmakers on both sides of the political aisle began pressing the Obama administration to do more to help relocate and protect members of the Iranian resistance who are confined to a camp in Iraq and subjected to periodic attack and assault by Iranian agents and Iraqi forces operating under Iran regime control.

The assertions came at a hearing Wednesday, during which President Obama’s former national security adviser warned that Iranian leaders have turned Iraq into a “client state” and are bent on exploiting the war against the extremist group Islamic State in the nation to promote their own brand of Shiite extremism.

Iran’s expanding influence in Baghdad, the general added, does not bode well for the members of the Iranian dissident Mujahedin-e-Khalq (MEK) group — some 2,500 members of which have been kept in a state of semi-captivity by the Iraqi government since U.S. forces pulled out of the nation in 2011. The MEK and other Iranian dissident groups have proven invaluable in getting information out from within Iran on the regime’s secret nuclear program, including disclosures about the Natanz enrichment facility and Arak heavy water nuclear reactor.

Sen. Jack Reed, the ranking Democrat on the Armed Services Committee, said that the “deteriorating security situation in Iraq only highlights the need to find safe refuge for these individuals outside that country.”

The resurgence of the Iranian resistance has been met head on by almost rabid-like hatred by the Iran lobby which has used every dirty trick in an attempt to discredit anything from the resistance. This has been especially true in using the tactic of calling any criticism of the Iran regime being sourced by the massive “Israel” lobby. In many ways, efforts by the National Iranian American Council(NIAC) and others in the Iran lobby to tie actions by the resistance movement to the traditional Israeli lobby is some kind of “guilt by association” move in order to try to make whatever the resistance has to say less worthy.

This has certainly been pushed by members of the Obama administration who have close ties to the NIAC and other Iran lobbyists such as Alan Eyre, the State Department’s Persian-language spokesman, who was taken to task by the Washington Free Beacon’s Adam Kredo for his efforts to downplay Iran regime terror acts and promote the ideas of such noted anti-Israel advocates such as Stephen Walt and Paul Pillar; both are staunch supporters of the NIAC and Iran regime.

Kredo notes that Eyre even appeared as the keynote speaker at the NIAC conference in Washington, DC.

The effort to continually denounce the Iranian resistance and somehow link it to Israeli politics is a ham-handed effort to cover up for the fact that large portions of the Iranian people actively and secretly oppose the mullahs and are living proof that their regime hangs precariously.