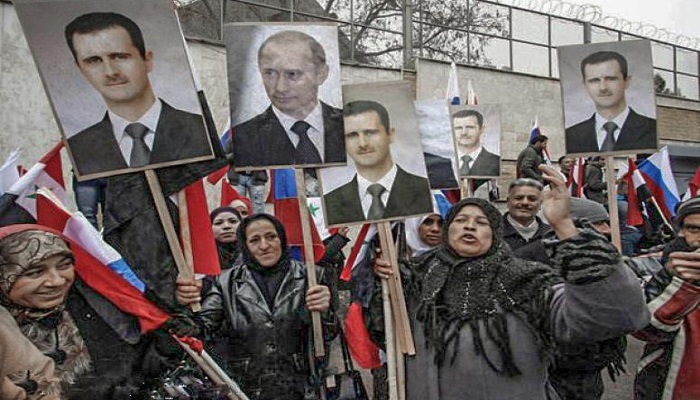 Events moved fast in Syria as Russian warplanes mounted air strikes at what they claimed were ISIS strongholds, but U.S. defense officials countered were instead Western-backed rebels opposed to the Assad regime. Coming on announcements by Russian officials of the creation of an intelligence-sharing unit with Iran regime and Iraq officials, the Russian action does not bode well for hopes to topple Assad.

The political calculation made by the Iran regime and its new Russian friends is that the U.S. lacks the political willpower and means to move forward on efforts to dislodge Assad, who has proven to be the mullahs in Tehran’s most stalwart ally and proxy.

Mohammed Alaa Ghanem of the Syrian American Council made the same analysis in Huffington Post as he looked at an editorial by Philip Gordon, the former Middle East chief in the Obama administration, in Politico.

Gordon argues that the goal of “displacing the Assad regime has proven unachievable,” and argues for a new U.S.-led contact group, different from the original one created in 2012, and instead include Russia and Iran in a new one.

Ghanem recites the failures in stemming Iranian backing of Assad at key points such as “when over 3,000 Iranian proxies first flooded into Syria, Secretary of State John Kerry provided no support to stop the assault and even strong-armed the Syrian rebels into attending peace talks. When Assad regime barrel bombs began raining down on Syrian cities, The U.S. again dragged the rebels into talks while blocking weapons transfers to stop the onslaught. U.N. Envoy Lakhdar Brahimi, who convened those later talks, has since blamed the regime for their failure.”

The Iran regime’s support of Assad and the unwillingness of the U.S. to halt that support – instead prioritizing approval of a nuclear agreement with Tehran – has led to an unimaginable refugees crisis of four million Syrians and civilian deaths numbering in the hundreds of thousands with another 600,000 Syrians opposed to Assad under virtual siege by Syria’s military and Iran regime mercenaries and Quds Forces.

But even with the rollout of the nuclear deal, there remain defiant voices in Congress still working to place restrictions on the Iran regime and connect the dots to the mullahs’ reign of human rights abuses. The fact that incidents of atrocities are sharply on the rise with increased news coverage, which has forced the Iran lobby to step up efforts to portray the regime as being a force for change.

Trita Parsi and Tyler Cullis of the National Iranian American Council, a leading Iran regime lobbying group, have been busy trying to convince news media that the rapid escalation in Syria is not the result of a new Russia-Iran-Iraq axis of terror, but rather the work of neocons bent on sending U.S. troops in.

Putting aside the fact that the only boots on the ground are now Russian and Iranian, the solution to Syria has always been centered in Tehran, not Washington. This point was driven home by protestors outside of the UN during Rouhani’s visit who represented a broad cross section of Iranian dissidents, Iranian-American community groups and Syrian activists opposed to the Assad regime.

Another advocate against the Iran regime is renowned author and Harvard Professor Emeritus Alan Dershowitz who published a new book, “The Case Against the Iran Deal: How Can We Stop Iran from Getting Nukes?.”

Dershowitz argues that policy makers have bit into a “bill of goods” which states that “any deal is better than no deal.” Historically, the objective of Iran to eliminate the barriers between it and a nuclear arsenal, and simple common sense proves that this deal makes the US and the rest of the world decidedly less safe.

The nuclear deal promises to release the Iran regime from the sanctions that have effectively isolated it for much of the past decade and held back the tidal wave of Islamic extremism that we are now seeing being unleashed.

More evidence of the spread of the Iran regime’s destabilizing influence came when Saudi-led coalition forces seized an Iranian fishing boat loaded with weapons on its way to deliver them to Iran regime-backed Houthi rebels in Yemen according to Reuters.

The announcement came a day after tribal fighters backed by the coalition won control of a strategic dam in central Yemen from Houthi forces following weeks of fighting east of the capital Sanaa.

The coalition, which also includes Bahrain, Qatar, Egypt and the United Arab Emirates, has been battling the Iranian-backed Houthis for more than six months.

I’m sure Parsi and Cullis would argue that the anti-tank shells and guidance systems were actually meant for an Iranian-sponsored fireworks display for children in Yemen.