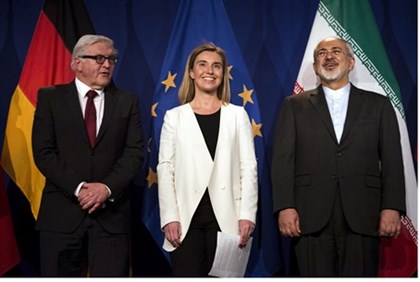 Behind the Deals and Photos Lies a Troubled Iranian Economy

Ever since the Iranian nuclear deal was agreed to last year, the Iranian regime has been busy staging elaborate photo opportunities announcing business deals and hosting trade delegations from a wide range of European, Asian and African nations looking to re-enter the Iranian marketplace.

For the regime, it has been a vital source of propaganda to show the world that Iran was indeed flourishing under the nuclear deal, which helped to reinforce the false messages and perception that the deal was helping to bring economic benefits to the Iranian people.

Of course, many trade delegations were faced with the inconvenient truth of the regime continuing its bloody policies of executing large numbers of Iranians during these visits, including juveniles that were publicly hanged during visits by European Union officials.

The reality though is much more dismal than the mullahs would like the world to know, although news media reports have begun to focus more closely and with greater scrutiny on the economic woes and mismanagement besetting Iran.

Chief among the many benefits the Iran lobby crowed about was the ability for Iranian oil to enter the open market with the lifting of economic sanctions. Regime advocates such as Trita Parsi of the National Iranian American Council contended that lifting these sanctions would bring Iran into the global marketplace, thereby moderating its behavior and bringing economic relief to hard-pressed Iranians.

The opposite has happened instead.

Bloomberg’s Julian Lee discussed the slide in Iran’s oil fortunes, noting that five months after sanctions on Iran were eased, the rapid rise in the country’s oil production and exports appears to be ending as quickly as it began.

Iran’s observed crude oil exports, which exceeded 2 million barrels a day in both April and May, slipped by almost 20 percent in the first three weeks of June, said Lee.

One of the country’s primary aims after restrictions on oil sales were eased was to regain its markets in Europe. Before the latest sanctions were imposed in 2012, Iran was exporting about 600,000 barrels a day of crude to countries in the European Union, with Italy, Spain and Greece its biggest buyers.

But more worrying for Iran is the difficulty that it seems to have had in persuading its biggest pre-sanctions buyers to resume purchases. Italy, previously Iran’s best customer in Europe, loaded its first cargo in mid-June, five months after the restrictions were lifted. Purchases by Spain and Greece are also well below pre-sanctions levels.

Outside Europe, Iran has also struggled to regain customers it lost to sanctions. A delivery to the Tanzanian port of Dar Es Salaam in March remains its only post-sanctions sale to Africa, while purchases by U.S. companies are still banned.

The steep decline in oil sales spells trouble for the regime, which counted on the influx of cash to help bolster a treasury wrung dry from the financing of three separate proxy wars in Syria, Yemen and Iraq.

Adding to the bad financial news for Hassan Rouhani and the mullahs in Tehran is word that the ballyhooed announcement of sales of Airbus commercial airliners to Iran was also in trouble with Iran thinking of cancelling some of the planes in the order, including the flagship mammoth A380 super jumbo jets.

Part of the difficulty, which the recently announced Boeing deal is facing, is the restrictions in place keeping most banks from financing the deals because of sanctions still in place against Iran for human rights violations and sponsorship of terrorism.

It certainly did not help the regime to have an international watchdog agency vote to keep Iran on its blacklist of nations still supporting money laundering and terrorism.

The economic difficulties Iran is experiencing underscore the inherent weakness of the religious leadership of the regime, especially in running an efficient economy. Virtually all of Iran’s major industries are run by or controlled by shell companies under the thumb of the Revolutionary Guard Corps and the various power factions of mullahs all enriching themselves at the expense of the Iranian people.

The level of corruption has erupted into protests and demonstrations that have rocked the regime for the better part of three years and have ranged from schoolteachers protesting low wages to small business owners demanding reforms to halt graft to mass demonstrations over sky high salaries paid to regime executives and state-controlled businesses.

In a sign of the growing desperation being felt by the regime, deputy chief of staff of the armed forces Brig. Gen. Masoud Jazayeri was the first Iranian official to offer a comment on the Brexit results in trying to tie the “Leave” to a rejection of American policies.

“The desire by the people of England to leave the EU is in reality a ‘No’ by the majority of the people for the continuation of the compliance of the British government with respect the imposition of America’s will on this country,” Jazayeri said.

It’s a ridiculous comment since virtually every exit poll showed Britons were alarmed at the sharp rise in Islamic extremist attacks and the mass influx of refugees fleeing the Syrian conflict aggravated by Iran’s support of the Assad regime there.

More importantly Brexit poses a significant threat to the mullahs since the United Kingdom is now free to pursue a foreign policy independent of the European Union which has sought to normalize relations with Iran since the nuclear deal.

What doesn’t help improve British perceptions of the Iranian regime is the recent illegal arrest of a British woman on charges she fomented insurrection by helping design a charity website years ago.

The reality is that the chaos created by Iranian regime in Syria is now coming back to haunt the mullahs and underscore how incompetent they are not only in managing the economy, but in foreign affairs.