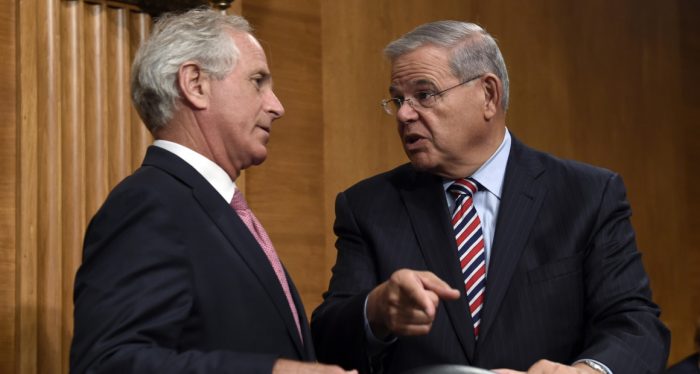 While the political divide between Democrats and Republicans may feel like the Grand Canyon, one at least one subject both sides seem to be able to agree: New sanctions need to be levied against the Iranian regime.

Senate Foreign Relations Chairman Bob Corker (R-Tenn.) on Thursday unveiled a bipartisan bill to slap the Iranian regime with new sanctions because of the country’s ballistic missile development, support for U.S.-designated terrorist groups and human rights violations, according to Politico.

Democratic co-sponsors, including Robert Menendez of New Jersey and Foreign Relations ranking member Ben Cardin of Maryland, emphasized that the measure was designed explicitly so as not to undermine the 2015 Iran nuclear deal.

The bill is supported by more than a dozen senators, according to a news release, including Marco Rubio (R-Fla.), Tom Cotton (R-Ark.), Bob Casey (D-Pa.) and Chris Coons (D-Del.) — giving it a strong chance of being taken up in the Senate.

“This legislation demonstrates the strong bipartisan support in Congress for a comprehensive approach to holding Iran accountable by targeting all aspects of the regime’s destabilizing actions,” Corker said in a statement. “These steps will allow us to regain the initiative on Iran and push back forcefully against this threat to our security and that of our allies.”

Menendez, who didn’t vote for the nuclear deal, said that the legislation was crafted to specifically avoid any sanctions lifted as part of the nuclear agreement, according to the Hill.

“This legislation was carefully crafted not to impede with the United States’ ability to live up to its commitments under the JCPOA, while still reaffirming and strengthening our resolve by imposing tough new sanctions,” he said.

Lawmakers were expected to roll out new sanctions on the Iranian regime ahead of a key foreign policy conference taking place early next week, Reuter reported.

The Senate legislation, according to an outline from Corker’s office, would include mandatory new sanctions on individuals tied to Iranian regime’s ballistic missile program and would expand terrorism-related sanctions to include the Islamic Revolutionary Guard Corps (IRGC).

It would also codify who is sanctioned over Iranian regime’s support for terrorism and force President Trump to enforce an arms embargo by blocking property for anyone tied to Iran’s sale or transfer of military arms.

In February, the Trump administration imposed sanctions on 25 individuals and entities in Iran, which it said were just “initial steps” in response to the regime’s repeated testing of ballistic missiles, which the United States maintains is in violation of UN resolutions.

Menendez told Reuters the bill was intended to take a “regional” strategy because of the breadth of Iran’s activities in the Middle East.

“It calls for a regional strategy because Iran is obviously involved in the region in various ways, whether it be in Yemen or Syria and beyond,” he said.

The bipartisan action taken in the Senate is a response to the growing provocations coming from the Iranian regime as it prepares for its presidential election in May.

On Tuesday, the aircraft carrier USS George W. Bush entered the Strait of Hormuz from the Indian Ocean, a vital waterway that handles about 30 percent of the world’s oil shipping. As it has done so often over the past few years, Iran sent a swarm of speedboats to harass the carrier, according to Breitbart News.

“What reason were they to be in an international corridor, other than to harass us? Was today the day they were going to come out and potentially deploy kinetic actions against us?” asked Rear Admiral Kenneth Whitesell, commander of Carrier Strike Group 2, as reported by Japan Times.

Captain Will Pennington of the George W. Bush said the U.S. Navy changed its security procedures after a Saudi ship was attacked off the coast of Yemen by what some describe as a “drone” boat, roughly comparable in size to the Iranian Revolutionary Guard Corps patrol boats.

“It’s unprofessional behavior, it’s harassment behavior and it’s something you wouldn’t expect when you’ve got a hundred giant vessels per day going through the Strait of Hormuz, and – at least from the flow of oil – the most critical strait in the world,” Whitesell said. “This is their routine behavior, which in any other area of the world, any other maritime environment, this would be seen as a violation of international law.”

The allegations of Iranian-made drones extended to ones used by Houthi rebel forces to attack Saudi and UAE missile defense sites in Yemen, an arms research organization said in a report Wednesday, according to the Washington Post.

The report, put out by the group Conflict Armament Research, or CAR, looks at seven Houthi Qasef-1 drones and one drone engine recovered by forces from the United Arab Emirates. Six of the drones were captured in October on a known Iranian smuggling route that runs through Oman, while another was found after an attack by Houthi forces near Aden, Yemen, last month.

The Qasef-1 is “consistent with descriptions and imagery” of an Iranian drone called the Ababil-T, produced by Iran’s Aircraft Manufacturing Industrial Company, according to the report.

The identification of the Qasef-1 as a possible Iranian drone variant comes almost two months after Houthi forces used an explosive drone boat to attack a Saudi frigate. Vice Adm. Kevin M. Donegan, commander of the U.S. Fifth Fleet, told Defense News that the drone boat probably had been supplied by Iran. The attack killed one, and the frigate returned to port with minor damage.

On Tuesday, Reuters reported that Maj. Gen. Qasem Soleimani, the head of Iranian regime’s Quds Force, recently met with top military officials in the Iranian capital in a bid to explore ways to better assist the Houthis. The outcome of the meeting appears to be an influx of military equipment and advisers into the civil war, which has now been running for two years.