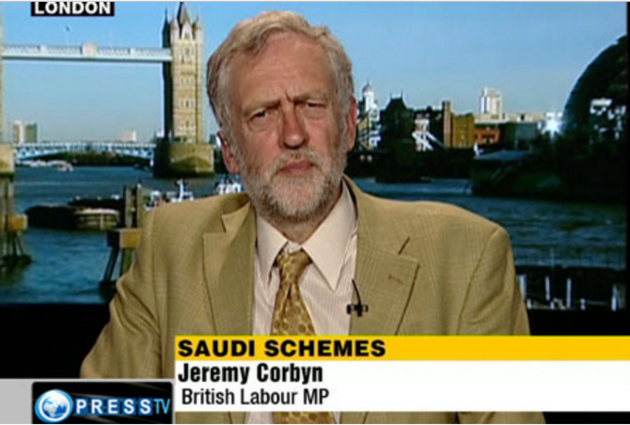 British Official in Hot Water Over $26,000 Payment from Iran

British Labor Party Leader Jeremy Corbyn found himself in some hot water when he admitted in a televised interview on Pink News that he took a $26,000 payment to appear on the Iranian regime’s state broadcaster as a pundit in which he criticized other countries human rights record.

He accepted these payments after hosting five shows on Press TV between 2009 and 2012. The irony of his admission on Pink News, a news outlet focusing on LGBT community issues, wasn’t lost on one viewer who called into the show calling him a “hypocrite” for appearing on a channel that was banned from the UK for its role in filming the torture of an Iranian journalist according to the Daily Mail.

What was even more incredible was Corbyn’s attempt to defend the payment, insisting it “wasn’t an enormous amount” of money.

It was during one of his appearances on Press TV when he made his much-criticized comments saying it was a “tragedy” that Osama bin Laden had been killed and not put on trial.

Famed Harry Potter author, JK Rowling, who has long been an opponent of Corbyn, commented when a fan tried to compare him to the Hogwarts headmaster of her books, that “Corbyn. Is. Not. Dumbledore.”

Corbyn’s appearances and the timing of his appearances reinforces what has recently been revealed about then depth and scope of efforts by the Iranian regime to influence Western countries during the run-up to the negotiations for the nuclear agreement last year.

Corbyn’s recruitment and payment is especially troubling since he is a sitting member of government and his appearances came shortly after the brutal crackdown over the disputed elections of 2009 in Iran and the crushing of democracy demonstrations as part of the so-called Arab Spring movement.

The fact that the regime was paying Corbyn, coincides with its support of the broader Iran lobby including support for institutions such as the National Iranian American Council and Ploughshares Fund that were part of the Obama administration’s “echo chamber” of support for the nuclear deal.

The Iran lobby’s shadowy connections to various bloggers and journalists such as Jim Lobe and Ali Gharib, as well as academics and members of so-called think tanks have been examined by many news organizations that have worked to uncover the tentacles of the regime’s effort to influence government policies in the West.

Now the NIAC’s official lobbying arm, NIAC Action, is actively trying to influence various U.S. Senate races this fall in an effort to unseat opponents of the Iran nuclear deal and replace them with other candidates more publicly sympathetic and supportive of the regime.

The Iran lobby has also sought to provide more political cover for those supporters and elected officials who are feeling the heat of critics of the regime, especially in light of the past year since the deal, which has seen the situation in the Middle East deteriorate badly and the Iranian regime at the center of three proxy wars in Syria, Iraq and Yemen.

One supporter of the Iran agreement is Sen. Cory Booker (D-NJ) who was on the receiving end of blistering editorial by Shmuley Boteach, executive director of The World Values Network in The Hill.

“Would Cory condone the Obama Administration sending Iran $400 million in cash in January, which experts say is utterly unprecedented, and which will undoubtedly be funneled to terror groups like Hezbollah”? Boteach writes.

“And speaking of Hezbollah, how could Cory, on the one hand, tell us that on his trip he saw firsthand the terrible humanitarian disaster of Syrian refugees, yet on the other defend giving $150 billion to Iran which is being used to prop up the genocidal government of Bashar Assad? Assad’s government, and its wholesale slaughter of the Syrian people, is what created this humanitarian disaster in the first place, along with nearly half a million Arab dead and millions of refugees. And Iran is a key ally keeping Assad in power. Cory could easily have condemned Iran’s support of Assad’s Arab genocide. Instead, he chose to remain silent,” he added.

The ability of regime supporters and the Iran lobby to cover for the regime’s bad actions is proving more difficult as the regime obliges by engaging in more provocative behavior, such as the recent deployment of Russian S-300 missile batteries at its Fordow nuclear facilities; an action the Wall Street Journal said was clear sign of the failure of the nuclear agreement in an editorial.

“Iran seems bent on exposing the nuclear-deal illusions of President Obama even before he leaves office. The latest sign came Sunday, when Iran’s state-run media aired footage of the S-300 air-defense system maneuvering around Fordow,” the Journal said.

“Meanwhile, the Obama Administration refuses to sanction Moscow for the transfer. Congress has enacted at least three bills either requiring or authorizing the President to sanction actors that help Iran acquire or develop advanced, destabilizing weapons like the S-300. Yet so far Washington has done little more than grumble and vow to ‘monitor’ Iran’s S-300 capability. President Obama made nonproliferation one of his priorities, but he will leave office amid a spreading nuclear threat thanks in part to his infinite patience with global rogues,” the paper added.

There is going to be a price to be paid for supporting the Iranian regime. We only hope officials such as Corbyn and Booker figure out they should stop being beholden to the mullahs in Tehran.