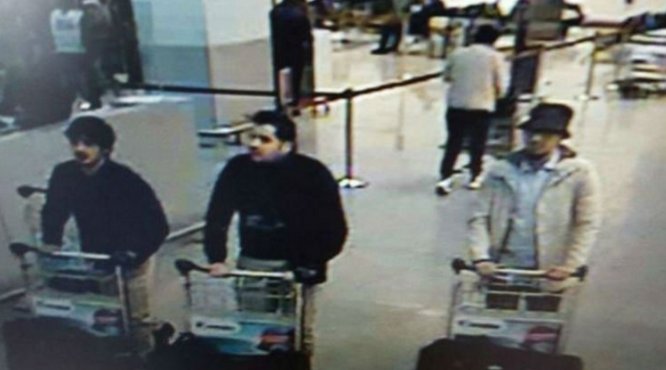 An airport ticket counter and Starbucks location crowded with people were the scenes of devastating suicide bombings in Brussels, as was a crowded commuter train where ISIS quickly claimed responsibility for the devastating attacks that so far has killed at least 30 and injured over 200 in a stark reminder of the vulnerability of Europe to sophisticated attacks.

The Islamic State-affiliated news agency has issued a bulletin claiming responsibility for the deadly attacks Tuesday in Brussels.

The claim was disseminated on the group’s official channel on Telegram, a social media platform, and picked up by other official ISIS channels on Telegram and on Twitter.

A security camera image was released depicting three men, two of who wore black gloves that many security experts indicated could have hid the triggering devices or prevented a premature detonation; steps detailed in training manuals developed and distributed by ISIS indicating a high level of planning, coordination and sophistication.

Brussels has now entered the lexicon of Islamic terror attacks that include New York, London, Paris, Madrid, Sydney and Ottawa and adds to the mounting evidence that Islamic extremists and ISIS will not simply be defeated by smart bombs and drones.

To defeat any extremist ideology, one has to look for its sources and how it is nurtured and exported. The blueprint for ISIS was laid out long ago by the Iranian regime which pioneered state-sponsored terrorism by formalizing its deployment in its Quds Forces, backed by the resources of the Revolutionary Guard Corps and excused by the theological nonsense espoused by the regime’s mullahs.

ISIS rise out of the quagmire of the Syrian civil war could not have been made possible without the Iranian regime’s support of the Assad regime that prolonged that conflict and reduced the effectiveness of moderate, Western-backed rebel groups in favor of Al-Qaeda affiliated militias.

The splintering and creation of ISIS from Al-Qaeda alone might not have been sufficient to launch the global army of terror we know face unless the meddling of the Iranian regime in Iraq forced the departure of Sunni tribes from the government of Nouri al-Maliki and created a power vacuum allowing for ISIS rapid advances in Iraq, culminating in the conquest of Mosul, which gave ISIS a quadrupling of territory, a ready-made labor force and fertile recruiting ground among disenfranchised Sunni communities.

The fact that Iran went all in by arming and deploying Shiite militias to fight ISIS initially in Iraq quickly turned this conflict into the bloody sectarian war it has now become.

The lack of an appropriate response from the Obama administration only intensified the conflict as Iran sought regional hegemony in a Shia crescent, thereby creating ISIS with a powerful recruiting tool among Sunnis.

Even as the evidence is clear and strong of the links between ISIS and the Iranian regime, the Iran lobby has ramped up to protect Iran from any criticism and have begun to mobilize to lobby the presidential candidates to protect the nuclear deal reached with Iran.

The National Iranian American Council (NIAC), strong advocates for Tehran, urged Hillary Clinton to follow President Obama’s lead in encouraging openings with Iran. It warned that “any deviation from Obama’s prudent and wise rhetoric and diplomacy will risk the significant progress achieved in the past few years.”

“At a time when President Obama is seeking to make his historic Iran policy change as irreversible as possible, we are concerned by Secretary Clinton downplaying the possibility of a larger diplomatic opening,” said Jamal Abdi, NIAC Action executive director.

The move to lobby Clinton is the clearest sign yet the NIAC and other Iran supporters are alarmed at the universal declarations coming from all the presidential candidates warning against accommodating the Iranian regime. Public opinion polls show Americans are leery of the regime and find little confidence in the mullahs promises of moderation that the Iran lobby have been flogging for the better part of three years.

The Brussels attacks are only another chapter in a long and bloody novel that is being authored in Tehran and the failure to connect the two will only result in more attacks and more deaths. Only by dealing effectively with Iran and pushing back its forces abroad back within Iran can we hope to curb the influence of the Revolutionary Guards and more importantly the nihilistic ideology the people like Ali Khamenei peddle in weekly chants of “Death to America” which still holds passionate meaning for him and his fellow clerics.

No matter how the Iran lobby tries to paper over the spread and growth of Islamic extremism, the root and source of that poisoned tree lies in Tehran with deep roots.