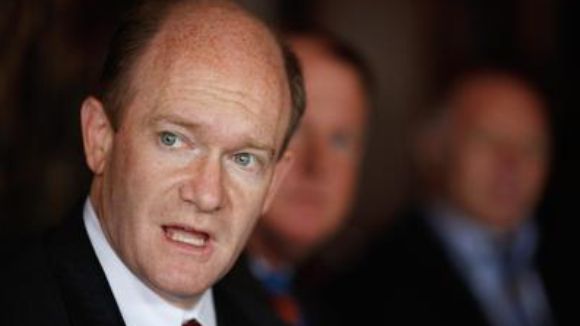 Sen. Christopher A. Coons (D-Del.), who serves on the Senate Foreign Relations Committee, has stepped up his calls – alongside a growing number of Democrats – for the Obama administration to move forward on implementing new sanctions against the Iranian regime for the apparent violation of bans against development of nuclear-capable ballistic missiles.

“I don’t know why the administration has hesitated, but I am urging them publicly and privately to move ahead with those designations,” he told reporters. “I am concerned with the hesitation to move forward with the ballistic missile related designations.”

Coons is among a growing number of Democrats, including some who supported the Iran nuclear deal, who have called on the president to take a firm response to two missile tests late last year. They argue that the administration’s response should show Iran that it will not be able to cheat on the nuclear agreement.

Coons, who supported the Iran nuclear deal, said it was “very clearly communicated and it played a role in my decision” to support the nuclear agreement that the United States was still able to sanction Iran on non-nuclear issues including its missile program or support for terrorist groups.

Unfortunately, Coons and other supporters of the nuclear deal were largely led astray by the Iran lobby which argued long and hard for a separation of nuclear issues from other issues such as missile development, human rights abuses and sponsorship of terrorism.

We are seeing the butcher’s bill come due now as the Iranian regime begins to push the envelope in all those areas now that it has its nuclear agreement.

Some, such as the New York Times editorial board, still cling to the hope that these issues could still remain separate in what can only be described as delusional thinking. In an editorial yesterday, the Times continued to make the argument that the nuclear deal was the more important goal:

“Critics of Iran and the nuclear deal say the missile tests are proof that the agreement failed. But ending Iran’s production of ballistic missiles was not the focus of the agreement. The greater threat by far has always been Iran’s nuclear program, which was coming closer to producing a bomb until the agreement halted the process.”

The Times does acknowledge the worrisome threat posed by the missile launches in light of the close collaboration between the Iranian regime and North Korea which supplied Iran’s first missiles and still supplies key components, but it still adheres to the laughable idea that there is a real difference and separation between regime president Hassan Rouhani and top mullah Ali Khamenei in terms of “moderates” versus “hardliners” when it comes to the strategic interests of the mullahs in Iran.

Furthermore, Ahmed Shaheed, the UN human rights advocate to Iran, said in a discussion with “Rooz”, Iranian website, that human rights in Iran have not witnessed a significant change since Rouhani’s reign, given that Iran has been refusing, for six years now, the UN rapporteur on human rights.

Amnesty International also issued a statement, last July, warning of the subject of the accumulating executions during the first half of 2015, after recording figures as high as 700 executions, at a time when Iranian statistics showed only 246 Iranians executed. Since Rouhani’s start of his term, over 2,000 people have been executed in Iran, placing Iran at the top of the world list for executions on a per capita basis.

Clearly change needs to come to Iran, but it won’t be coming from the mullahs.