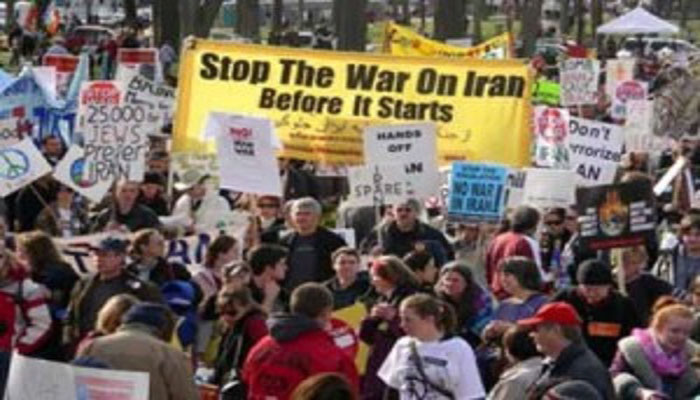 NIAC, CASMII, AIC and other pro-Iranian regime organizations have built close relations with radical leftist and anti-war groups and use them to promote their political agenda.

Abbas Edalat, who founded the Science and Art Foundation (SAF) in 1999 and subsequently helped Trita Parsi establish NIAC, created yet another NGO in December 1, 2005, called the Campaign Against Sanctions and Military Intervention (CASMII).

As its name implies, it was established to oppose sanctions and military intervention in Iran.[1]  More importantly, it was designed to reach out to anti-war organizations and persuade them to support the pro-Iran lobby agenda.

Little information is available about Edalat beyond his academic background.  Since 1989, he has been a professor of Computer Science and Mathematics at Imperial College in London.  He also is an adjunct professor at the Department of Mathematical Sciences at Sharif University in Tehran,[2] and an adjunct professor at the Institute for Research in Fundamental Sciences, Niavaran Square, in Tehran.[3]  What compelled him to leave Iran and his ongoing connections to the regime are unknown.

When CASMII was founded, three members of its leadership were also board members of NIAC, including:

Three others who lent their support to CASMII had been board members on Parsi’s earlier NGO, Iranians for International Cooperation (IIC):

CASMII claims to be an independent organization, but its political positions echo those of the Iranian regime.  For its extreme bias, the organization has been dubbed a “regime cheerleader” for Iran, a “propagandist mouthpiece,” and a “Mullah Supporter in the West.”

To influence policy, CASMII stated it planned to lobby “members of parliament and opinion-makers,” work in close collaboration with groups sharing similar views, and hold public meeting to highlight “relevant issues and to provide a critique of the increasingly belligerent threats against Iran.”[4]

CASMII and NIAC have collaborated on various projects.  As an example, they co-authored a letter in October 2007, titled “Give Diplomacy of Chance – Say No to Military Conflict?” which was sent to officials in Iran, UK, and US.[5]

In November 2006, CASMII joined Action Iran and Iran Solidarity to create Campaign Iran.  Typical of its publications “Answering the Charges,” a document riddled with falsehoods about the Iranian regime.  CASMII claimed Iran had not blocked any inspections for more than a year:

“Iran has fully complied with International Atomic Energy inspections.  They signed the Additional Protocol of the Nuclear Non-Proliferation Treaty and for most of the last three years have allowed inspectors “to go anywhere and see anything.”[6]

Hassan Rouhani, then Iran’s top nuclear negotiator, announced in October 2003 that Iran would sign the Additional Protocol to allow unfettered access to its nuclear sites.  But after signing the document, he then announced it had to be ratified by the Majles (parliament).  To this day, the document has not been ratified and the IAEA has yet to have unfettered access to go anywhere and see anything in Iran.

Many people once identified with CASMII no longer appear active.  At one time, CASMII had a Steering Committee, US Board of Directors, Advisory Board, and Academic Advisory Board.  The organization’s website has stopped displaying a list of CASMII’s leaders.  Below are current and past leaders of CASMII.[7]

US Board of Directors

In August 2008, CASMII announced an Academic Advisory Board.[10] Its members included:

[1] CASMII does not condemn Iran’s military interference in neighboring countries.

[2] The Institute was created in 1989 by the Atomic Energy Organization of Iran (IEOI) as a training facility for nuclear scientists.  It previously was called the Institute for Studies in Theoretical Physics and Mathematics, also known as the Jabit bin al-Hayyan Laboratory.  While the Institute is not believed to be directly involved in Iran’s nuclear weapons program, it does train others who are conducting such activities.

[8] The Iranian Embassy’s website in Britain, the Organization of the Mojahedin of the Islamic Revolution in Iran, an Iranian political party, and a website for the Iranian Ministry of Science, Research & Technology.