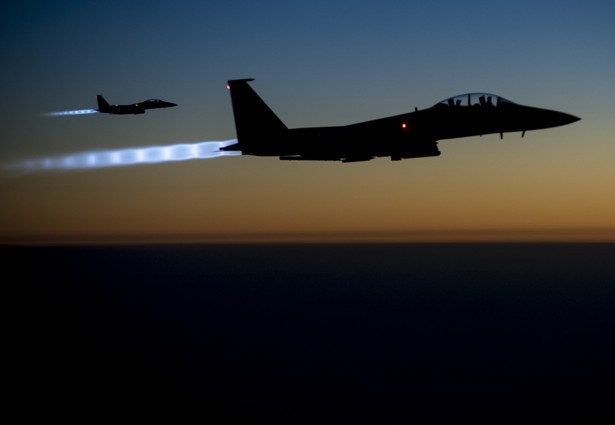 Chances of US and Iran Confrontation Grows in Syria

The Iranian regime has been instrumental in the evolution of the Syrian civil war. From its earliest days when the regime of Bashar al-Assad violently put down pro-democracy demonstrations, the mullahs in Tehran have done everything they could to keep Assad in power.

As one of its few allies, the Assad regime represents a vital link for Iran to the Mediterranean and serves as a counterweight to the Iranian regime’s rivals. As one of the few partners the Iranian regime has, Syria serves as more than an ally, but also as a sign of Iranian strength and reach.

The dark days for the Iranian regime and Assad in the early days of a growing rebellion revealed deep fissures in Syrian society and forced Iran’s mullahs to open up its larder to supply Assad as he quickly was running out of cash, ammunition, weapons and soldiers as mass defections within the Syrian army took hold.

As the Iranian regime launched an air bridge between Tehran and Damascus using its own airlines to ship badly needed supplies to Assad, the situation on the ground changed as well as radicalized Islamic extremist fighters began to trickle in from safe havens in Afghanistan and Iran.

For the mullahs in Iran, they saw an opportunity to use these militants to target and attack more moderate Western-backed rebel groups fighting Assad and turn the terms of the rebellion away from democracy and towards a war against terror; an ironic twist considering Iranian regime’s own long history of supporting terror.

The fact that Iran was using Hezbollah fighters as its shock troops on the ground in Syria was no mere coincidence. The regime has long used these terrorists in proxy operations around the world.

In response, the world aligned to fight these new terror groups, including ISIS thereby buying time for Assad and breathing room for Iran’s mullahs to make moves.

After years of ISIS-inspired and led terror attacks around the world in Paris, Brussels, Orlando, Nice, Boston, San Bernardino, Sydney, Ottawa and Berlin, the world finally took the fight to ISIS and worked to drive it back out of Mosul in Iraq and now has made advances in Syria, but those gains have brought a new situation that is only gaining in tension.

Military forces from the U.S., Russia, Iran, Turkey, Saudi Arabia, Iraq and Afghanistan are now all converging on similar territory in Syria as ISIS forces get pushed further back bringing on the very real possibility that these forces may inadvertently start shooting at each other.

In one border crossing between Syria and Iraq, in a town called Tanf, that possibility loomed large as U.S. aircraft dropped leaflets warning pro-Syrian regime militia to avoid one the so-called deconfliction zones around a small U.S. occupied base there, according to the Military Times.

Officials at the Pentagon have acknowledged that pro-regime forces are active in the area and were conducting armed patrols in the vicinity of Tanf.

U.S. and British Special Forces use the facility to train Syrian opposition forces for the fight against ISIS, according to U.S. Central Command officials. The deconfliction zone encompasses a 55-kilometer radius around the base.

“These patrols and the continued armed and hostile presence of pro-regime forces inside the deconfliction zone are unacceptable and threatening to coalition forces,” said a CENTCOM official.

With the pending liberation of the Syrian city of Raqqa by U.S.-backed Kurdish forces, elements of the Syrian regime and proxies allied to Iran have been jockeying for control.

Without any agreement between parties to the conflict in Syria on what to do with formerly held ISIS territory, confrontation becomes a likely avenue, said Fabrice Balanche, a leading French expert on Syria and a visiting fellow at The Washington institute for Near East Policy.

Ultimately, Syria is worried about the permanent presence of a U.S.-backed Syrian opposition group blocking a strategic route for the regime.

Over the weekend, members of the Katib Imam Ali, an Iraqi Shiite militia associated with the Iranian regime, positioned a large number of forces to include tanks and technicals — modified pickup trucks with mounted heavy machine guns — just outside the 55-kilometer zone.

Officials in Baghdad say they will use force to defend the installation where U.S. forces are operating. Only two weeks ago, pro-regime militias tested U.S. forces requiring strikes from U.S. aircraft to attack a pro-regime tank and bulldozer.

Syrian rebels say the U.S. and its allies are sending them more arms to try to fend off a new push into the southeast by Iran-backed militias aiming to open an overland supply route between Iraq and Syria.

The stakes are high as Iranian regime seeks to secure its influence from Tehran to Beirut in a “Shi’ite crescent” of regime’s influence through Iraq, Syria and Lebanon, according to Reuters.

A commander in the military alliance fighting in support of Assad told Reuters the deployment of government forces and pro-Damascus Iraqi fighters in the Badia would “obstruct all the plans of the MOC, Jordan and America”.

The commander, a non-Syrian, said Assad’s enemies were committed to blocking “what they call the (Shi’ite) Crescent”. But, he said, “Now, our axis is insistent on this matter and it will be accomplished.”

The mullah’s backed Iraqi Badr militia said its advance to the Syrian border would help the Syrian army reach the border from the other side. “The Americans will not be allowed to control the border,” its leader, Hadi al-Amiri, told al-Mayadeen TV.

As all these forces converge, it’s clear that Iranian regime’s long support of Assad is finally leading it into direct conflict with the U.S. and its allies and that will be a scenario the mullahs in Tehran should surely avoid.