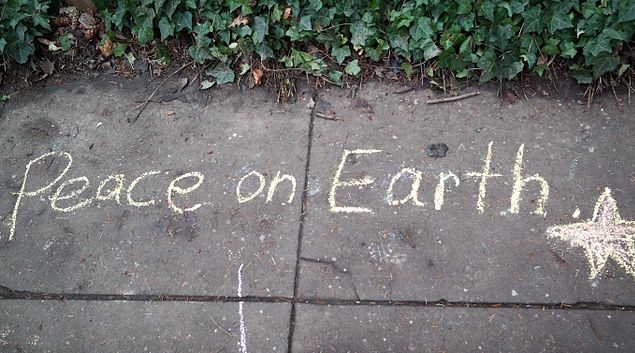 Christmas Hope for a World at Peace

With the world celebrating Christmas and all other assorted holidays this week, it’s worth stepping aside from our normal hustle and bustle and recognize how for one very brief moment, a significant portion of humanity can be joined in peace and harmony.

Even in the worst and darkest times, there can be a glimmer of hope as there was in Christmas of 1914 during World War I when the so-called “Christmas Truce” took place in the trenches of the Western Front.

Even though trench warfare and modern weapons had rendered warfare more akin to industrial slaughter, that particular Christmas found British and German soldiers climbing out of their trenches to exchange seasonal greetings, souvenirs and food and even join in carol-singing. While that truce did not last, throughout history combatants have found small moments to remember the meaning of the holidays.

In today’s world though, we find ourselves living in a time where holiday shoppers have to be on the lookout for unattended bags, passengers on airlines endure enhanced screenings and parents dropping off their children at movie theaters to see the new “Star Wars” movie fret over mass shootings.

The recent terror attacks in Paris and San Bernardino have set Americans on edge to the point that handguns have moved to the top of several wishlists for people wanting to protect themselves, while local law enforcement look for any signs of extremist behavior in social media and in their communities.

The fact that this heightened sense of security is quickly becoming the “new normal” is saddening and a reflection of what our lives may have to be like for the foreseeable future as bad actors around the world continue to focus their terrorist attacks and extremist ideologies at precisely what the holidays have come to represent: peace, joy, love, harmony, tolerance and community.

Nowhere has that been more emblematic than in the wholesale slaughter and expulsion of Christians throughout the Middle East, which reached a crescendo with the plight of the Yazidi sect in Syria and Iraq where 5,000 of them were massacred in 2014 and the sexual enslavement of thousands of women and girls by ISIS.

This was followed by the now infamous videos aired by ISIS killing Egyptian and Ethiopian Christians in mass beheadings and the near eradication of Christian towns, villages and communities in the wake of Islamic extremism’s rapid march.

According to the New York Times, the percentage of the Middle Eastern population that was Christian from 1910 to 2010 was once as high as 14 percent, but has now declined to roughly 4 percent, and all but gone in Iran. Even in Lebanon, once a Christian-dominated country with 78 percent of the population, Christians now account for only 34 percent as Hezbollah and other Islamic extremists groups have taken control over large portions of the country.

The future of Christianity in the region of its birth is now uncertain. ‘‘How much longer can we flee before we and other minorities become a story in a history book?’’ says Nuri Kino, a journalist and founder of the advocacy group Demand for Action.

According to a Pew study, Christians face religious persecution in more countries than any other religious group. ‘‘ISIL has put a spotlight on the issue,’’ says Anna Eshoo, a California Democrat in the U.S. House of Representatives, whose parents are from the region and who advocates on behalf of Eastern Christians. ‘‘Christianity is under an existential threat.’’

But the plight of Christians is only one part of a much larger puzzle where Islamic extremists and religious theocracies such as the Iranian regime systematically drive out any other religion not theirs in order to create a religiously pure society.

Of the 3.1 million displaced Iraqis, 85 percent are Sunnis. No one has suffered more at the hands of ISIS than fellow Muslims. Other religious minorities have been affected as well and in large numbers: Shia Turkmen; Shabak; Kaka’i; and the Mandeans, who follow John the Baptist.

‘‘Everyone has seen the forced conversions, crucifixions and beheadings,’’ David Saperstein, the United States ambassador at large for religious freedom, said. ‘‘To see these communities, primarily Christians, but also the Yazidis and others, persecuted in such large numbers is deeply alarming.’’

The fact that there are almost no Christians left in Iran speaks volumes to the hospitality they enjoy under the yoke of the mullahs in Tehran. There are currently 91 Christians in Iranian regime prisons, including American pastor Saeed Abedini who will not be celebrating Christmas with their families and loved ones.

Most are imprisoned under the false charges of threatening national security through their ministry of Christianity.

We can only hope that by next Christmas, these families experience the greatest present of them all, the return of their loved ones and the halt of persecuting Christians in Iran and elsewhere.