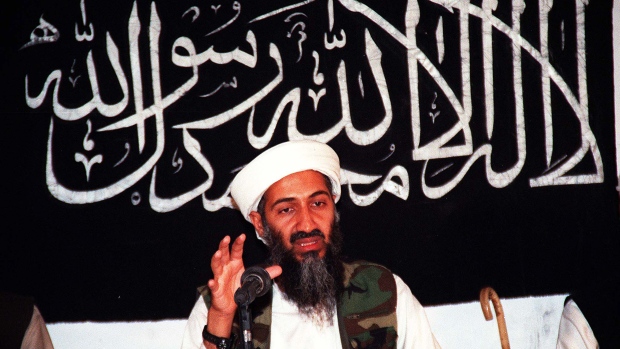 U.S. intelligence officials have long suspected ties existed between the Iranian regime and Osama bin Laden and his al-Qaeda terrorist network, even though Iran and its supporters in the Iran lobby have vigorously denied it.

Now the Central Intelligence Agency has released a trove of some 47,000 documents taken from bin Laden’s computer by U.S. special forces during the mission that killed the notorious terrorist leader in 2011 in his compound in Abbottabad, Pakistan.

Within that document dump was a 19-page al-Qaeda report in Arabic showing how bin Laden looked towards Iran in an alliance against the U.S.

“Anyone who wants to strike America, Iran is ready to support him and help him with their frank and clear rhetoric,” the report reads.

The Associated Press examined a copy of the report released by the Long War Journal, a publication backed by the Washington-based Foundation for Defense of Democracies, a think tank fiercely critical of Iran and skeptical of its nuclear deal with world powers. The CIA gave the Long War Journal early access to the material.

The material also included never-before-seen video of bin Laden’s son Hamza, who may be groomed to take over al-Qaida, getting married. It offers the first public look at Hamza bin Laden as an adult. Until now, the public has only seen childhood pictures of him.

Equally significant is the apparent location of the wedding: Iran. An analysis of the video from Long War Journal’s Thomas Joscelyn notes that Hamza bin Laden was technically in Iranian custody until 2010 but does not seem to regard himself as a prisoner in letters he wrote to his father. Furthermore, Hamza reported being mentored in the ways of jihad by several senior al-Qaeda men who were supposedly in detention in Iran.

Iranian regime officials have always vigorously denied any connection to al-Qaeda and consistently pointed to the alleged incarceration of al-Qaeda members as proof of the regime’s commitment against terrorism, but bin Laden’s own computer files shine a damning light on how false that narrative has been.

Among the most interesting revelations are details of Iran’s collusion with al-Qaeda and bin Laden’s citation of the Muslim Brotherhood as a formative influence on his political thought.

The document recovered from bin Laden’s system provides an extensive description of al-Qaeda’s collusion with Iran, as summarized by the Long War Journal:

The author explains that Iran offered some “Saudi brothers” in al Qaeda “everything they needed,” including “money, arms” and “training in Hezbollah camps in Lebanon, in exchange for striking American interests in Saudi Arabia and the Gulf.” Iranian intelligence facilitated the travel of some operatives with visas while sheltering others. Abu Hafs al-Mauritani, an influential ideologue prior to 9/11, helped negotiate a safe haven for his jihadi comrades inside Iran.

But the author of the file, who is clearly well-connected, indicates that al Qaeda’s men violated the terms of the agreement and Iran eventually cracked down on the Sunni jihadists’ network, detaining some personnel. Still, the author explains that al Qaeda is not at war with Iran and some of their “interests intersect,” especially when it comes to being an “enemy of America.”

Bin Laden was clear that Iran was a major covert supporter of al-Qaeda, providing funds, shelter for al-Qaeda operatives, and communications infrastructure. Two U.S. intelligence officials characterized the newly-released documents to NBC News as “evidence of Iran’s support for al-Qaeda’s war with the United States.”

Unfortunately for Zarif the documents are not a fabrication of the U.S. government, but rather come straight from the keyboard of one of Iranian regime’s terrorist partners.

This coincides with an account offered by the U.S. government’s 9/11 Commission, which said Iranian officials met with al-Qaeda leaders in Sudan in either 1991 or early 1992. The commission said al-Qaeda militants later received training in Lebanon from the Shiite militant group Hezbollah, which Iranian regime backs to this day and has used as its primary military forces in the Syrian civil war.

U.S. prosecutors also said al-Qaeda had the backing of Iran and Hezbollah in their 1998 indictment of bin Laden following the al-Qaeda truck bombings of the U.S. Embassies in Kenya and Tanzania that killed 224 people, including 12 Americans.

“The relationship between al-Qaeda and Iran demonstrated that the Sunni-Shiite divisions did not necessarily pose an insurmountable barrier to cooperation in terrorist operations,” the 9/11 Commission report would later say.

This is an important conclusion, made years ago, that drew the starkest line from al-Qaeda to the Iranian regime and discounted the messaging from the Iran lobby that Sunni and Shiite differences would keep Shiite Iran away from Sunni dominated al-Qaeda.

The reason why this now-proven fact is so important is because it is the exact same argument made to deny any connections between the Iranian regime and ISIS.

The unmistakable truth now with these disclosures is that the Iranian regime has been and remains the single largest supporter and partner of terror in the world and operates freely with any terrorist group aligned against the U.S.