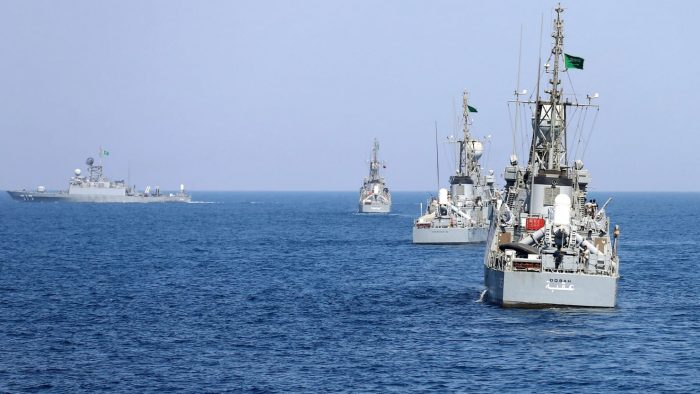 Incidents involving confrontations with the Iranian regime and its proxies are beginning to sharply escalate around the Middle East as tensions are ratcheted up by the mullahs in Tehran. It is almost like a high stakes poker game with Iran upping its bets because it’s too far in with a weak hand to fold.

Most worrisome has been the rise in direct incidents with Iran and its chief rival, Saudi Arabia, as illustrated in the latest incident.

The three “are now being questioned by Saudi authorities,” the Information and Culture Ministry said in a statement.

The vessel, seized by the Saudi Navy on June 16, was carrying explosives and intended to conduct a “terrorist act” in Saudi territorial waters, the statement said.

Relations between the two countries are at their worst in years, as they support opposite sides in conflicts in Syria, Yemen and Iraq, and each accuses the other of destabilizing regional security.

The incident comes on the heels of the Iranian regime launching missiles purportedly at ISIS positions in Syria in retaliation for terror attacks in Tehran. Iran blamed Saudi Arabia for those attacks which makes this incident in Saudi waters suspicious as to whether or not Iran’s Quds Forces might have been mounting an attack against Saudi installations in response to the ISIS attack.

Meanwhile in Syria itself, open warfare seems to be breaking out as a U.S. fighter jet shot down a Syrian air force jet after it had bombed positions occupied by U.S.-backed rebel groups. This was followed by a declaration from Russian forces that U.S. warplanes would be potential targets if they attacked Russian elements.

It’s worth noting that Iran brought Russia into the Syrian conflict on behalf of the Assad regime when it was facing imminent defeat on the battlefield. That escalation has now proven to be potentially disastrous as Russian and U.S. units increasingly come close to shooting at each other.

All of this was preceded when U.S. forces opened fire on Syrian militias backed by Tehran three times in the past month. All of the incidents took place at al-Tanf, a remote desert outpost near the border with Iraq and Jordan, where U.S. and British special operations forces have been training Syrian rebel fighters.

Earlier in May, U.S. warplanes attacked a Syrian Army motorcade moving to al-Tanf. As a result of the strike, two servicemen were killed and 15 were injured. A similar incident also took place on May 18, killing six.

The series of clashes has demonstrated how the eastern Syrian desert is becoming an arena for confrontation between the U.S. and Iran, a potential flashpoint alongside Yemen. Following the attacks on Damascus positions, an operational headquarters of the allied forces of the Syrian government army threatened the U.S.-led coalition with a retaliatory strike.

The fight in Syria is becoming even more high stakes as it becomes clear that the Iranian regime has shown no intention of giving up any territory it wins from ISIS; intending to become a permanent presence there in a similar manner to how it exercises control in Iraq through Shiite militias it backs.

Fox analyst and author Charles Krauthammer called the Iranian land grab a mirror image of the fight for territory following the collapse of Nazi Germany at the end of World War II.

“This is like the last year of World War II. We’re all fighting the Nazis but we know they’re finished,” he said.

Krauthammer said that like the 1940s, the Americans and the Soviets know the Germans will soon be defeated, but are battling for who takes what when the war ends.

While Iran maneuvers to preserve its gains, the Iran lobby has also stepped up its rhetoric in shifting from defending the Iran nuclear deal to now defending Iran’s ballistic missile program as outlined in an editorial by Reza Marashi of the National Iranian American Council in HuffingtonPost.

“Much to the chagrin of leaders in Washington, Tel Aviv and Riyadh, Iran launched ballistic missiles into Syria on Sunday, targeting ISIS in retaliation for its terror attacks in Tehran two weeks ago. These strikes are the first time that Iran has launched missiles since its 1980-1988 war with Iraq, which begs the question: Why has Tehran shifted its three decades-long policy of testing, but not using missiles? The answer should now be clear: It’s a reaction to Trump’s escalation in the Middle East,” Marashi said.

Marashi claims that Trump’s stepped-up military activity in Syria while simultaneously criticizing Iran has only created a “recipe for war.” A silly assertion since it was Iran’s intervention in Syria in the first place that started the entire Syrian conflagration.

Marashi is correct in his assertion that Iran’s missile strike was intended to communication a wider message that the mullahs are willing to fight to preserve their gains in Syria and not allow it to slip away from them. They understand that a defeat in Syria will likely lead to regime change at home.

Understandably Marashi tries to also tie Saudi Arabia to the ISIS attacks in Tehran and by extension tries to lay blame on regional instability on U.S. allies and deflect any responsibility away from Tehran.

Marashi delivers the final justification for Iranian bloodletting when he says the U.S. support for regime change in Iran eliminates the possibility of any further U.S.-Iran cooperation in the future.

Only the Iran lobby would make the argument that seeking democratic change in Iran is a pathway that inevitably leads to war.

This certainly demonstrates how much the NIAC values freedom for the Iranian people.