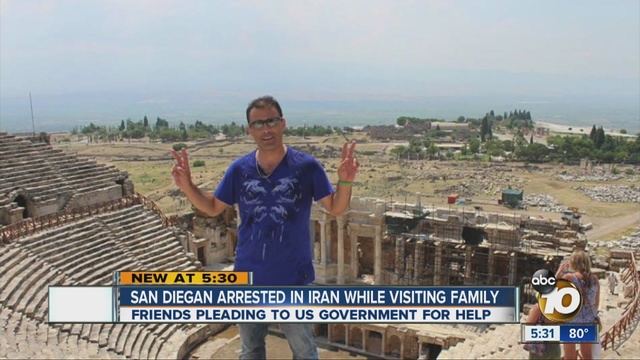 It feels like the summer version of Groundhog Day as the U.S. State Department said it was looking into reports that another American has been detained by the Iranian regime.

According to the San Francisco Chronicle, State Department spokesman John Kirby would not comment further Thursday on the detention of Robin Shahini. The girlfriend of the San Diego man said Shahini’s sister told her Iranian authorities took him into custody July 11 while he was visiting family in his native Iran and he has not been heard from since.

The girlfriend asked not to be identified because she has family in Iran and fears for their safety. She said she worries Shahini was detained because of his online comments criticizing Iran’s human rights record.

It’s getting to the point that if you want to get arrested all you have to do is post a tweet criticizing Iran’s human rights record and then wait for the knock on the door by the Revolutionary Guards.

The Chronicle noted that the Revolutionary Guard has increasingly targeted those with Western ties since the nuclear deal in which Iran agreed to limit its uranium enrichment in exchange for the lifting of sanctions.

Shahini, 46, graduated in May from San Diego State University with a degree in International Security and Conflict Resolution. He had been accepted to SDSU’s graduate program in Homeland Security.

The Chronicle said His girlfriend said he left for Iran on May 25 to see his mother who was diagnosed with Alzheimer’s. The girlfriend said she communicated with Shahini on July 10 and was expecting to hear back the next day to help him get his paperwork into the university. She grew concerned after not hearing from him.

She eventually reached his family who told him Iranian intelligence officials came to their home in Gordon, Iran, and took him away. Authorities searched the home and took his personal belongings, she said. The family has not talked or seen him since. He had a plane ticket to return to San Diego on July 25 and had planned to start classes on Aug. 22, the girlfriend said.

The day Shahini’s family says he was detained on July 11, Iran announced the indictments of a Lebanese man and three dual nationals. The four were arrested in connection with separate cases over the past year. Family members and representatives of the four say they did nothing wrong. All four have ties to Britain, Canada and the United States. The charges they face remain unclear.

The recipe for getting these prisoners of other nations released from Iranian prison often relies more on public pressure than diplomacy according to human rights groups.

“Fortunately, all the cases of Americans we’ve worked on were eventually resolved, but only after a great deal of public pressure was put on Iranian authorities,” said Elise Auerbach, Amnesty International USA’s Iran specialist.  “Very often the authorities will tell prisoners and their families to just be quiet and not go public and all will go well, but the opposite is true.”

The much-ballyhooed prisoner swap of five Americans in the wake of the Iran nuclear deal set the stage for the mullahs in Tehran to believe they can snatch up innocent citizens and hold them as bargaining chips later.

The practice is getting so out of hand that the British Foreign Office issued a travel advisory for Iran warning its citizens, especially any with dual Iranian nationality, of the risk of being scooped up and arrested.

According to the Guardian, the British government relaxed its advice against all but essential travel to Iran in July 2015 after the landmark nuclear agreement. But a stalemate over the fate of at least two British-Iranians currently detained in Tehran appears to have led the FCO to amend its instructions, although it has not raised concerns to the same level as before the nuclear deal.

“British nationals – including dual British/Iranian nationals – face greater risks than nationals of many other countries,” reads the new advice, which was updated on Friday. “The security forces may be suspicious of people with British connections. The risks are likely to be higher for independent travellers or students than for people travelling as part of an organised tour or business people invited by the Iranian authorities or companies.”

The warning will be bad news for Iran as it struggles to strengthen economic ties with the UK and attract more foreign tourists. The ongoing detentions of Nazanin Zaghari-Ratcliffe, a British-Iranian woman held since April, and 76-year-old businessman Kamal Foroughi, a dual national in prison since May 2011, have undermined efforts by London and Tehran to improve relations.

In Why Does Iran Keep Taking American Hostages?, published in the September 2015 issue of The Tower Magazine, Iran expert Ali Alfoneh described the regime’s detainment of foreign and dual-nationals as “a perfectly normal procedure and political practice in the Islamic Republic. That has been the case since the first day of the revolution and continues until today.”

The public outcry over the regime’s hostage taking erupted into Canada as Lawyers Without Borders Canada and Quebec’s Bar association called on Iran’s government to make public its case against Homa Hoodfar, the Iranian-Canadian academic currently imprisoned in Tehran’s notorious Evin Prison on unknown charges.

Hoodfar was first arrested in March by the counter-intelligence unit of the Iranian Revolutionary Guards. They told her she could not leave Iran to return to Canada.

Over the next two months, relatives say she was interrogated without a lawyer and then summoned to the prosecutor’s office at Evin prison where she was allowed to post bond and was released on bail.

She was then re-arrested on June 6 and charges against her have now been filed, but Tehran prosecutor Abbas Jafari Dowlatabadi has not detailed the charges she faces.

“The failure to reveal the charges against professor Hoodfar, the limits and constraints that seem to be imposed on her attorney, the lack of clarity surrounding the case, and the treatment professor Hoodfar has received to date bring back dark memories for Canadians and raise serious questions regarding compliance with Iranian law and international law applicable to Iran,” Pascal Paradis, executive director of Lawyers Without Borders Canada, said in a statement.

“Like any other Iranian citizen, professor Hoodfar has the right to full answer and defense under the International Covenant on Civil and Political Rights, to which Iran has been a party since 1975”, he added.

Predictably, the Iran lobby, most notably the National Iranian American Council and other regime apologists, were silent on this latest round of hostage taking.

Hopefully public pressure and growing awareness that the Iranian regime hasn’t changed one bit since the nuclear deal agreement will prevent this Groundhog Day from repeating itself anymore.