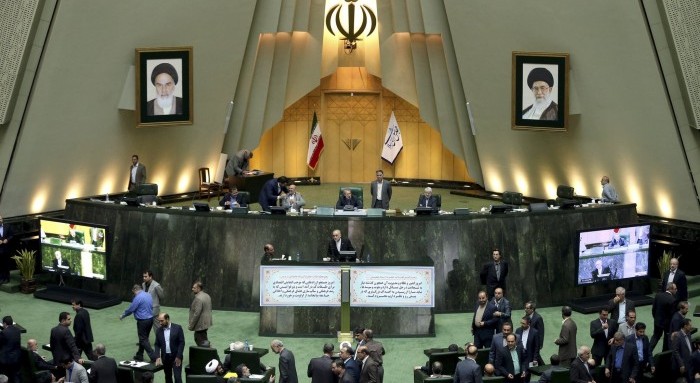 Elections in U.S. and Iran Pose Question of What Next?

With the upcoming presidential elections in the U.S. and regional “elections” in Iran, the question of who will lead both countries remains a hot topic of discussion. From the perspective of looking at the actions of the Iranian regime since a nuclear deal was concluded by the Obama administration last July, it seems readily apparent that the mullahs in Tehran are eager to get on with the busy of antagonizing the U.S. and spreading their form of extremist Islamic beliefs around the world as quickly as possible.

The mullahs wasted little time in taking provocative acts that the Iran lobby has been hard pressed to explain or cover for. This includes the secret trial and sentencing of Washington Post reporter Jason Rezaian and continued holding of several Iranian-American hostages, as well as the recent arrest of another who had previously been linked to creating Iran lobby group, the National Iranian American Council.

The mullahs also went all in with a new offensive in Syria and buying spree with the Russians for military hardware to replenish badly outdated stocks and the marshalling of new fighters, Afghan mercenaries and Hezbollah proxies into that war zone.

The mullahs even launched not one, but two banned ballistic missiles in defiance of United Nations Security Council restrictions preventing the development of missiles capable of carrying a nuclear warhead.

Besides the direct actions the regime has taken, social media has been flooded by messages from various regime officials, most notably top mullah Ali Khamenei’s social feeds, denouncing the U.S. and accusing the Western nations of sedition, using “sexual attractions” to distract the regime and even creating ISIS. If it wasn’t for the fact Khamenei is the commander-in-chief of one of the largest militaries in the Middle East, we might be tempted to chalk his rants off to the ravings of a senile old man battling dementia.

Unfortunately, we’re stuck with Khamenei for a little while longer, but his recent prostate cancer surgery and upcoming elections in the Assembly of Experts has led to more open speculation of who will succeed the aging tyrant.

The assembly of 82 elected clerics is charged with electing, supervising and even disqualifying the religious leader for the regime and represents a high stakes game of poker amongst the mullahs as they jockey for power.

Reuters pointed out that over past decade, conservatives have gained more seats both in the assembly and parliament, because all candidates are vetted by the Guardian Council, who’s most influential members are chosen directly and indirectly by the Khamenei to interpret the constitution.

Khamenei is commander-in-chief of the armed forces and appoints the heads of the judiciary. Key ministers are selected with his agreement and he has the ultimate say on Iran’s foreign policy and nuclear program. By comparison, the president has little power, which largely explains why Hassan Rouhani is generally regarded as a figurehead puppet for Khamenei.

All of which raises the question of whether or not real regime change is possible within Iran. Long-time Iranian dissident leaders such as Mrs. Maryam Rajavi of the National Council of Resistance of Iran have maintained that global support of dissidents within Iran was a pathway to creating a new, more moderate, secular Iran, but if the rest of the world falls into the trap of trying to discern “moderate” versus “hardline” elements within the Iranian regime, real change will not be possible since the mullahs have worked hard to create the fiction that there are clear divisions within the government.

The fact of the matter is that as long as Iran’s foundation for government rests on a religious mandate granting mullahs absolute power over civil, political, economic, judicial and military matters, real change and reform is not possible.

You can already see this fictionalized treatment of Iran’s politics already at play with Gareth Smyth’s piece in the Guardian in which he depicts “broad support for President Hassan Rouhani’s government is not just over its foreign policy but also its desire to revive the economy and private sector. From this follows all the speculation in Tehran that principle-ists like Ali Larijani, the parliamentary speaker, and Ali Akbar Nategh-Nouri, a seasoned strategist, will help organise an electoral list for parliament broadly backing the president.”

Smyth’s observations which are the stereotype justifications for the appeasers of the mullah’s regime are understandable since he focuses only on those regime elements available to his eyes which are not so much factions within the regime government as much as muted shades of the same color. A policy that is actually very much favored by the Iranian regime, as it promotes more collaboration with the mullahs and prolongs its rule. Trying to persuade the concept that any slate of candidates would be allowed on the ballot without the express approval of Khamenei himself is slightly silly since Khamenei is as intent on preserving the extremist rule as his predecessor Ruhollah Khomeini was.

The tea-leaf reading of potential regime candidates such as Mohammad TaqiMesbah-Yazdi and Hassan Khomeini is fairly useless given the central control the mullahs will still exert through the selection process of placing names on the ballot.

What is not in dispute is that regime has taken a newly aggressive posture that the incoming U.S. president, whoever that may be, will have to deal with. It will be an Iran ruled by another mullah and enriched by billions in fresh cash, open trade pouring investment dollars in and a military upgraded with sophisticated new hardware.

He or she will also be faced with an Iranian regime that may very well be cheating on the nuclear deal it agreed to in July, which raises the next logical question: What will the new president do in the face of Iranian regime’s aggression?