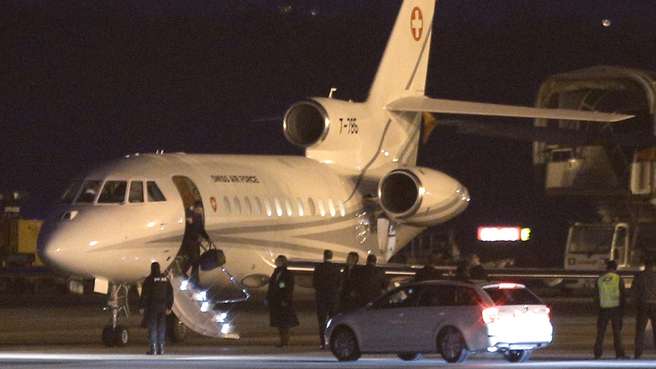 An unidentified man leaves a Dassault Falcon jet of Swiss army at the airport in Geneva, Switzerland, Sunday, Jan 17, 2016. A US government plane waited nearby to bring back to the US the men who were left from imprisonment in Iran the day before. (AP Photo/Laurent Cipriani)

This weekend brought an almost frantic rush of events as the Obama administration and international community lifted economic sanctions against the Iranian regime, while also facilitating a prisoner swap of four Americans being held in Iran with seven Iranian-Americans being held in U.S. prison for trafficking in illegal weapons and nuclear materials.

Three of Americans fly out of Iran and onto Germany to be reunited with loved ones, including Christian pastor Saeed Abedini, former U.S. Marine Amir Hekmati and Washington Post reporter Jason Rezaian. A fourth American, Nosratollah Khosravi whose imprisonment had not been previously reported, opted to stay in Tehran where he has a residence.

The lifting of nuclear sanctions on Saturday allowed Iran to re-enter the world’s oil markets; according to some estimates, by the end of the year its exports may increase by a million barrels a day, yielding about $30 million a day in revenue at current prices. Its ships will be able to enter and leave foreign ports, and its citizens will have access to global financial markets. On top of which the regime is scheduled to being receiving cash transfer of frozen assets that could total as much as a staggering $150 billion.

The Obama administration also took to clearing up several old accounting issues, including a payment of $1.7 billion representing a $400 million refund in payments made for military equipment sold to the government under the former shah, but never delivered because of the revolution along with interest accumulated over 37 years.

With all of this cash now flooding into the Iranian regime’s coffers, the single biggest question hanging over the Middle East is “What will the mullahs do with all that money?”

Considering the nuclear agreement made no attempt to link any restrictions on how the money was to be used, the mullahs are essentially free to do whatever they like with it, which has caused Iran’s neighbors to become very worried.

In Saudi Arabia, there was concern that the lifting of sanctions would bolster Iran and its allies. A statement by 140 Sunni Muslim clerics urged Muslims to unite against the threat of Shiite Iran. It criticized actions by some minority groups in Muslim countries and accused them of “serving foreign agendas,” a veiled reference to what they view as the loyalty of Shiites in Sunni-majority Arab countries to Iran.

Iran’s rivals are also worried that Tehran will spend some of the billions of dollars of oil revenue unfrozen by the lifting of sanctions on aiding regional allies that include Syrian President Bashar al-Assad, the Shiite group Hezbollah in Lebanon and the Shiite-linked Houthi rebels in Yemen.

The prisoner swap and lifting of sanctions was predictably hailed by the Iran lobby, but even the regime’s staunchest supporters recognized the current ambivalent mood of American and European voters who have been unnerved by a rash of terror attacks inspired by Islamic extremism.

“While this diplomatic victory should be celebrated, it is impossible to ignore the ongoing systemic human rights violations in Iran. Recent arrests of activists and artists appear aimed at intimidating reformists and moderates ahead of key elections to Iran’s parliament and Assembly of Experts. Further, an ongoing rise in executions – often for nonviolent drug-related offenses – must be halted without delay. We hope that the moderation that has dramatically impacted Iran’s external relations can now shift inward to produce lasting change,” said the National Iranian American Council, the regime’s leading lobbyist, in a press release. On the same line, it has been trying to put the blame on other factions or “hardliners” within the mullahs regime for the surge in executions and oppressive measures taking place during Rouhani’s tenure, the “moderate” president of the mullahs.

This also represents the double-edged sword the Iran lobby now has to traverse since it has bet everything that the regime will act like a normal civil nation from now on. If the Iranian regime continues to escalate its conflict with Saudi Arabia, continues to fund terror groups or continues to apprehend American sailors at will on the high seas, then public opinion will be turned quickly against the lobby.

Iranian dissident groups that know the regime’s leadership best had the best perspective on this weekend’s events.

“The major part of Iran’s economy (more than 50% of its GDP) is controlled by 14 large entities, all of which are affiliated with the military and security apparatus and controlled by Supreme Leader Ali Khamenei. Much of the released funds will end up in the coffers of these 14 economic entities. A good portion of IRGC expenditures and the monthly financial assistance to the Syrian dictator is paid up by the profits of these institutions. The bulk of the released funds will flow to these economic hubs and will thus serve Khamenei and the IRGC,” said the National Council of Resistance of Iran, one of the leading dissident groups, in a prepared statement.

The NCRI points out, correctly, that the Iranian regime is lurching towards parliamentary elections with a flurry of political arrests and a rapid escalation in public executions – 53 in the first two weeks of January alone – in order to maintain control of the Iranian people, especially if they are anticipating a windfall from the release of funds which they are not likely to receive.

As the Wall Street Journal pointed out in an editorial, this weekend’s events cemented the perception that the Iranian regime essentially swapped four Americans for over $100 billion in cash, access to the international banking system and a re-entry into the global oil markets.

“The timing of Iran’s Saturday release of the Americans is no accident. This was also implementation day for the nuclear deal, when United Nations sanctions on Tehran were lifted, which means that more than $100 billion in frozen assets will soon flow to Iran and the regime will get a lift from new investment and oil sales. The mullahs were taking no chances and held the hostages until President Obama’s diplomatic checks cleared,” the Journal declared.

“But the Iranians negotiated a steep price for their freedom. The White House agreed to pardon or drop charges against seven Iranian nationals charged with or convicted of crimes in the U.S., mostly for violating sanctions designed to retard Iran’s military or nuclear programs. Iran gets back men who were assisting its military ambitions while we get innocents. This is similar to the lopsided prisoner swaps that Mr. Obama previously made with Cuba for Alan Gross and the Taliban for alleged deserter Sgt. Bowe Bergdahl,” the Journal added.

All of this shows that the mullahs tried and true policy of taking hostages will only embolden them to do more. The right policy though seems to be a firm policy much similar to the Sanctions that forced them to come to the nuclear negotiation table.