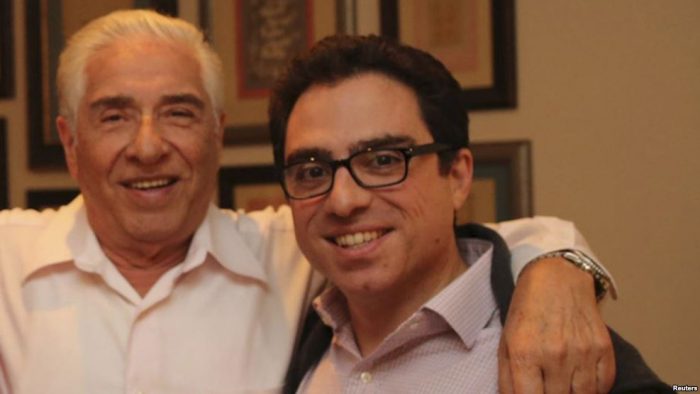 Even Iran Lobby Is Not Immune From Regime Extremism

Siamak Namazi, a 45-year-old Iranian-American businessman who enjoyed close ties and access to one of the Iran lobby’s leading advocates in the National Iranian American Council, found himself on the wrong end of a 10-year prison sentence handed down by an Iranian court.

Sentenced alongside his 80-year-old father, Baquer Namazi, a former Iranian provincial governor and former UNICEF official who also has dual Iranian-American citizenship, Siamak has become another hostage pawn in the Iranian regime’s schemes to angle for more cash, more accommodation and more appeasement from the US.

Both men were sentenced to 10 years in prison for spying and cooperating with the U.S. government, said Tehran prosecutor Abbas Jafari Dolatabadi, according to the Fars news website, without specifying when exactly the sentences had been handed down.

The U.S. State Department’s deputy spokesman, Mark Toner, said the father and son had been “unjustly detained” in Iran, and called for their immediate release.

“My father has been handed practically a death sentence,” Babak Namazi said in a statement.

Baquer Namazi has a serious heart condition and other medical issues requiring special medication, his wife wrote on Facebook in February. On Tuesday, UNICEF called for his release on “humanitarian grounds.”

One significant difference though is that Siamak Namazi has been reported to have worked alongside long-time friend Trita Parsi in launching the NIAC with the idea of forming an advocate within the US to help push the Iranian agenda in the hopes of gaining a lifting of crippling economic sanctions.

For Parsi, the creation of NIAC and its companion lobbying arm, NIAC Action, has provided him and his colleagues with a comfortable living, access to influential power brokers and a platform to extol their support for the mullahs in Tehran.

Yet, Namazi was still snatched up by regime officials along with his father and sentenced to a long prison term without much disclosure as to why.

Mizan, the Iranian judiciary’s official news site, published on Sunday video images of Siamak, set to dramatic music and spliced together with images of President Barack Obama and Rezaian, who was released from an Iranian jail in January after more than 18 months in detention.

The video showed Siamak’s U.S. passport and identification card from the United Arab Emirates, where he previously lived. It then showed him standing and holding his arms outstretched, as if being searched, while being filmed by at least one other cameraman. The website said the video depicted “the first images of the moment of Siamak Namazi’s arrest.”

It is a stark and disturbing reminder to other supporters of the regime that their utility only goes so far and should be a sharp slap in the face for folks like Parsi who urged support for a more “moderate” Iran, but now find their associates as easily punished as anyone else; without any special status or immunity for their previous support for mullahs.

The arrests also expose the folly of regime president Hassan Rouhani’s much-touted visit to the United Nations in 2013 in which he famously urged Iranian ex-pats to come back to Iran and help their country; only to find virtually all dual national citizens are fair game for arrest.

In his most recent trip back to the UN last month, Rouhani remarked on CBS News’ “60 Minutes” program that the Iranian regime did not even recognize dual national status.

It’s an amazing turnaround in only two years and mirrors the sharp reversal of by the regime after getting its promised nuclear deal; leaving it free to deal harshly with its enemies both foreign and domestic in a broad and harsh crackdown.

The arrest and sentencing of such a close associate of Parsi and the NIAC, finally motivated Parsi to issue a press release with unusually tough language more in line with what his staunchest critics have said about the regime in the past.

“Both Siamak and Baquer Namazi have been denied basic due process and all indications are that the Iranian government has been using them as political pawns in violation of its own laws and basic human decency,” Parsi said.

“For the United States, the sentencing is a clear signal that more political capital and attention needs to be dedicated to securing the release of the Namazis and other Americans imprisoned in Iran. The United States should leave no stone unturned in utilizing diplomatic channels to press the Iranians to secure their release.”

If you didn’t know the statement came from Parsi, you might have mistaken it from a long-time Iranian regime critic from Congress or the pages of the Washington Examiner.

The irony should not be lost on anyone.

For all of its efforts to promote the regime and boost the lifting of economic sanctions and flood the regime with billions in cash that the mullahs are now using in three proxy wars in Syria, Iraq and Yemen, the NIAC and other Iran lobby members are faced with the inconvenient truth that supporting Iran is no guarantee of future safety or security from the same extremists actions against others.