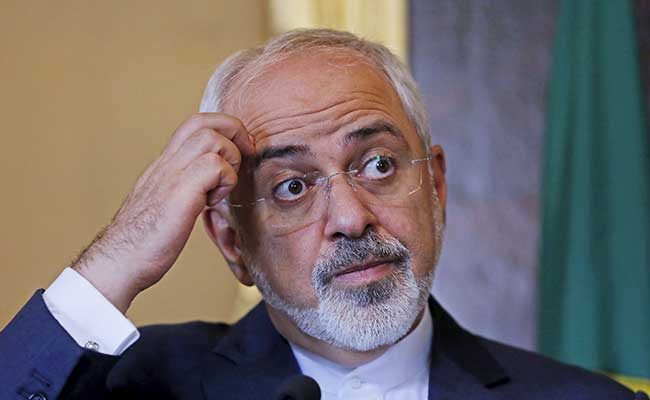 The Iranian regime’s foreign minister, Mohammad Javad Zarif, authored an editorial that ran in the New York Times which has been receiving some play in social media circles and it is worthy of closer examination because of the litany of falsehoods it perpetuates.

Zarif’s editorial recounts the completion of the Iran nuclear accord and the benefits it has brought the region, specifically to Europe as it has opened Iranian markets to European Union companies.

He warns that all that demanding work has been put at risk by President Donald Trump’s assertive stance towards the regime, especially its ballistic missile program which the U.S. views as a strategic threat to its forces and allies in the region.

While Zarif waxes longingly about the crisp Vienna air two years ago, he neglects to mention what Iran has accomplished in that same span of time that might now make his list of accolades.

There is little surprise in his editorial running in the New York Times which has long been a staunch advocate of supporting policies easing the burden on Iran during the Obama administration and Zarif repays its support in literary license by equating President Trump’s opposition to the regime to the threat of climate change.

Ultimately though, Zarif’s editorial is aimed squarely at the capitals of EU nations that may be wavering in their wholehearted support of the opening economic channels with the Iranian regime; some have already made the shift such as France under incoming French President Emmanuel Macron’s strong denunciation of Iran’s ballistic missile program.

What Zarif and his mullah masters have recognized is that support throughout European capitals is thinner than they think. The past two years of Iranian involvement in several conflicts have had a detrimental effect on Europe, especially the Syrian civil war which widened only after Iran stepped in with cash, arms and troops to save the regime of Bashar al-Assad.

That conflict alone set in motion one of the largest migrations of refugees into Europe since the end of World War II and helped give rise to the radical extremism of ISIS which has plagued Europe of terrorist attacks in London, Paris, Brussels, Berlin and elsewhere.

European leaders, while attracted to the idea of accessing Iranian markets for investment, are realizing that doing a deal with the devil is no deal worth doing in the long run.

History may also be playing a role since the diplomatic history of Europe has been littered with many failed efforts to rein in extremism such as the Munich Accords which failed to bring Adolf Hitler to heel. Those reminders serve to pointedly give EU nations pause when considering what to do next with Iran.

Zarif didn’t help his cause when he attempted to push some silly false narratives in his editorial, especially extolling the defensive virtues of Iran’s ballistic missile program, insisting their pinpoint accuracy should not cause concern.

His claim that Iran’s desire for a vast military buildup is only fueled by history such as the Iran-Iraq War rings hollow when taken in the context of how the regime has invested so heavily in weapons that can strike well beyond its own borders and threatens Europe itself.

This may explain why leaders such as Macron are quick to push back against Iran now since they already have a model of ballistic futility to follow in the standoff with North Korea and the rest of Asia.

Macron can probably envision how France may end up in the same proverbial boat as Japan is now with North Korea lobbing missiles over its airspace and Iran demonstrating it will soon be able to achieve the same thing.

Zarif’s blaming of the revolt in Yemen on Saudi Arabia is even more outlandish since Iran was the one responsible for inciting the Houthis to revolt in the first place and arming them with weapons that include shooting missiles at targets within Saudi Arabia.

He also mentions Iranian regime’s “partners” but while he means to include Russia and Turkey in that description, the regime’s real partners are terrorist proxies that fight its wars, including Hezbollah in Syria, Shiite militias in Iraq and the Houthis in Yemen.

These are hardly the partners that “labor to put out fires.” If anything, the Iranian regime’s partners are more like the arsonists he decries, and they have thrown matches that have caused vast tracts of the Middle East to be consumed in bloodshed.

But if Zarif wants to talk about Turkish partners, he might want to mention Resit Tavan, a 40-year old Turkish businessman, being charged by U.S. prosecutors for illegally smuggling U.S.-made engines and boat generators to the Iranian navy in violation of sanctions.

Or possibly Mehmet Hakan Atilla, who is accused of using his position at Turkey’s state-run HalkBank to design a system of money transfers to help Iranian regime access cash.

Of course, Zarif also neglected to mention the fates of several European citizens currently languishing in regime prisons, including a British-Iranian aid worker which the Iranian regime will treat as an Iranian citizen and she will serve her sentence as determined by the judiciary, Iran’s foreign ministry spokesman said on Monday.

The fates of her and other European citizens, who have been treated as hostages to be used as political pawns by the mullahs, only reinforces the perception that is growing in Europe that the Iran nuclear deal was a bill of goods and Iranian regime used to gain much-needed cash to fund its military activities while strangling any hope of democratic reforms domestically.

This sentiment has been on display with the large numbers of European Parliament members now meeting with members of the Iranian resistance movement to decide on how best to confront the Iranian regime.

If Zarif’s editorial is any indication, the mullahs in Tehran are deeply worried that Europe may soon be following the lead of the Trump administration.