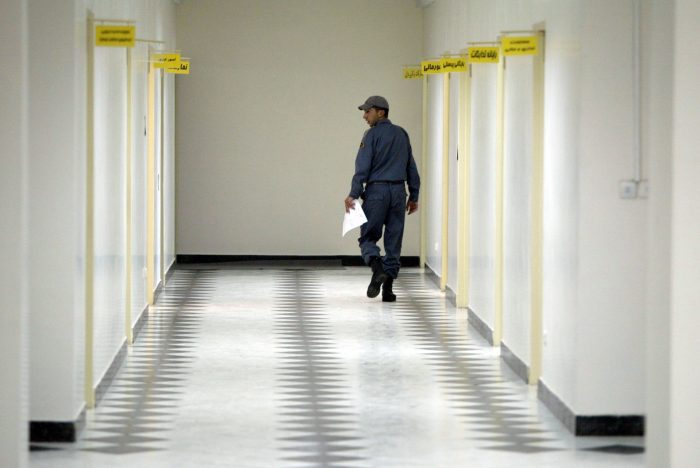 File photo shows an Iranian soldier walking in a corridor of Evin prison during a journalist’s visit to the prison in Tehran, Iran on June 13, 2006. Esha Momeni, 28, an Iranian-American student from Los Angeles is imprisoned in Tehran and is not being allowed to talk to her family, her attorney says. Momeni, described as a researcher looking into the status of women in Iran, was pulled over for a traffic infraction in Tehran on October 15 and is now being held at the notorious Evin prison. Momeni has been allowed one phone conversation since her arrest, which her attorney says may have been related to the One Million Signatures campaign, in which women in Iran are pressing for more rights. Several Iranian-Americans were held for months in Iran last year because the government suspected them of working for a “velvet revolution,” and were eventually released without being charged, the BBC reported. (UPI Photo/Mohammad Kheirkhah) (Newscom TagID: upiphotos893509.jpg) [Photo via Newscom]

The debate that rages over U.S. policy towards the Iranian regime under the Trump administration has been marked by a near-constant war of words on social media, editorial pages and blogs with the Iran lobby rising up to challenge every assertion made by Iran critics, as well as deflect from any horrific act committed by the mullahs in Tehran.

The rancor has obscured one important and painful reminder of personal suffering which is the plight of dual-nationals being held as hostages in Iranian prisons by the regime.

These citizens of other countries were arbitrarily snatched up by the regime’s Revolutionary Guard Corps, tossed into prison, and in some cases given secret trials without access to counsel, while others have simply been held without charge or trial.

Most have been subjected to physical, emotional and mental abuses that we would find appalling and even denied much needed medical care as their health has deteriorated as in the case of a British mother who works for a charity organization.

There are five Americans reportedly being held in Iran who were arrested almost immediately after another batch of American hostages were released shortly after the nuclear deal was agreed to and pallets of cold hard cash were flown to Tehran on Iranian jets in a blatant swap.

Iranian officials even boasted of not selling these new hostages for less than $1 billion.

The Iran lobby has been quick to gloss over their plight, only issuing the briefest of rebukes at the beginning and never raising the issue again. The National Iranian American Council has been the most ridiculous in playing this game even through its founder, Trita Parsi, claims one of these hostages, Siamak Namazi, as a close personal friend.

If this is how hard Parsi fights for a friend, I’d hate to see what he does for a relative.

But for the families of these hostages, their pain is real and the struggle to maintain hope is often elusive. They petition the world’s media and beg for the release of their family members from regime officials who ignore them.

This week though, attention has shifted back as family members press their cases again in the media and we observe the passing of the grim decade milestone of one missing American, Robert Levinson.

“I ask myself and my fellow American neighbors: Where is the justice I have come to associate with America?” Robin Shahini, 46, wrote to his family from an Iranian jail.

Shahini was convicted of collaborating with “a hostile government,” the U.S – an accusation his family denies. He was reportedly sentenced to 18 years in prison.

“This charge is unjust and the Iranian government intended to commit this wrong against me, an innocent American citizen, for political purposes. I ask of you, please to not let Iranian government use me,” Shahini wrote in his letter.

“I ask you beloved citizens and all human-loving individuals to not leave me alone and defend my rights, which is also the right of each and every one of you. Defending me is defending yourselves. Do not let me be alone.”

The number of arrests and detentions of visitors…especially dual-citizens… has spiked, warns Lisa Daftari, the editor of the website “The Foreign Desk,” who has followed Shahini’s case.

Daftari also said the arrest and trial of Shahini, and other dual-U.S. citizens like him, serves as a broader propaganda purpose for Tehran, according to Fox News.

“The Iranian regime is delivering a stern message to Iranians living abroad, not to get involved in political activity, not to speak out against the regime, and they want Iranians to know that they are in fact being watched.”

Dan Levinson, the son of missing former FBI agent Robert Levinson, penned an editorial in the Washington Post, lamenting his father’s disappearance in Iran for the past 10 years.

“The United Nations Working Group on Arbitrary Detention, which investigates cases of arrest that may be in violation of international human rights law, did something in January that the previous two U.S. presidents failed to do: It announced a finding that my father, retired FBI agent Robert Levinson, was arrested by Iranian authorities without any legal grounds in March 2007 on Kish Island, and it called on the Iranian government to release him immediately,” he writes.

“In finding that Iran has violated international law — and fundamental human decency — by detaining a U.S. citizen and providing him no rights whatsoever, the U.N. working group is being far more aggressive than our own U.S. government has been in 10 years. This is shameful,” Levinson added.

Levinson went on to encourage the new president to pressure Iran for his father’s release.

“If Iran continues to deny holding him and fails to act, Trump can pressure it with tools such as sanctions — which he demonstrated his willingness to use already – or labeling Iran’s Islamic Revolutionary Guard Corps, which was very likely involved in my father’s detention, a terrorist organization. Trump can put my father at the center of every single discussion he has with or about Iran and finally make him a top priority — not just in words like the previous administration, but in action,” he said.

We hope these families can be reunited with their loved ones soon and believe that is only going to happen by applying heavy pressure on the Iranian regime and its leaders.