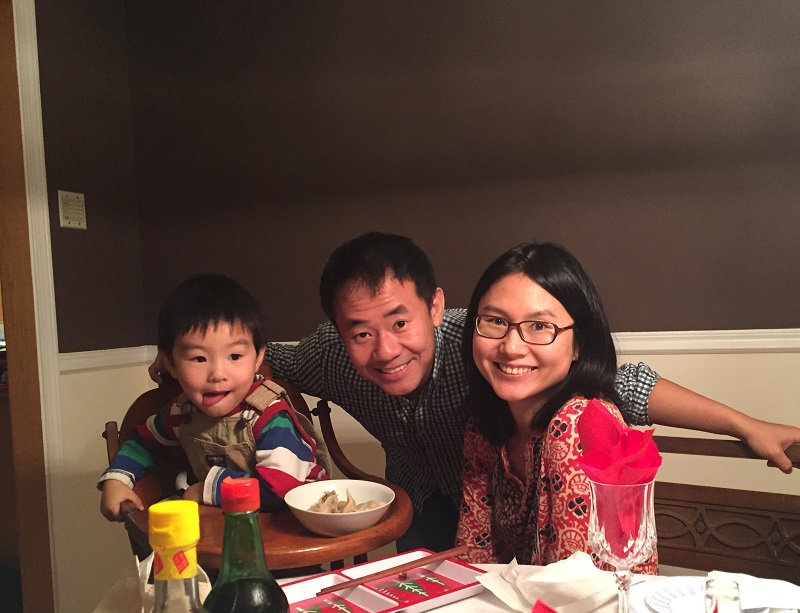 Xiyue Wang, a naturalized American citizen from China, arrested in Iran last August while researching Persian history for his doctoral thesis at Princeton University, is shown with his wife and son in this family photo released in Princeton, New Jersey, U.S. on July 18, 2017. Courtesy Wang Family photo via Princeton University/Handout via REUTERS ATTENTION EDITORS – THIS IMAGE WAS PROVIDED BY A THIRD PARTY.

Ever since Otto Warmbier was brought back from his imprisonment and torture in North Korea only to suffer from severe brain damage and eventually succumbing to his injuries, President Donald Trump has become more personally involved in the plight of Americans being held hostage in Iranian prisons.

Though there is a large partisan divide that separates the president from Democrats and Republicans, on the issue of American prisoners he has become quietly, but forcefully involved in sending unmistakable messages to the mullahs in Tehran that he wants them freed.

While there is plenty of speculation as to why the president takes a personal interest in this issue, there is none regarding the correctness of his position. Even the Iran lobby’s most ardent supporters, the National Iranian American Council, could not hide from the cruelty in the regime’s latest hostage taking, Xiyue Wang, a Chinese-American graduate student from Princeton University, who was sentenced to 10 years in prison.

Trita Parsi, the head of the NIAC, put out a statement condemning Wang’s “unjust detention and sentencing.” Of course, Parsi couldn’t help but tie the case back to old message of the sentencing as an effort by hardline elements in Iran seeking to “undermine Iran’s economic reintegration into the world.”

His statement underscores the ever-shrinking island for the Iran lobby when it comes to supporting the Iranian regime. The past two years since the nuclear deal was agreed to have fully demonstrated how incapable Iran has become to living up to the false promises of moderation made by people such as Parsi.

The Iranian regime has never made it a secret that it views hostage-taking as an essential tool of statecraft and not just American citizens either. It has detained and imprisoned Canadians and European citizens and used them as pawns in negotiations with their nations in trying to wring out concessions.

The fact that the Obama administration essentially rewarded the regime by paying pallets stacked with cash for the return of Americans including Washington Post reporter Jason Rezaian, only incentivized the mullahs to take more hostages.

But for now, the Trump administration has openly called for the release of three Americans currently still in Iran, including former FBI agent Robert Levinson and Siamak and Baquer Namazi, son and father who are Iranian-American businessmen.

In Levinson’s case, he has been held in Iran for over 10 years and Iranian officials refused to make him part of the deal that released Rezaian and other hostages.

“The United States condemns hostage takers and nations that continue to take hostages and detain our citizens without just cause or due process. For nearly forty years, Iran has used detentions and hostage taking as a tool of state policy, a practice that continues to this day with the recent sentencing of Xiyue Wang to ten years in prison,” the White House statement read.

The statement urged that Iran is responsible for the care and well being of all US citizens it has in its custody. It added that Trump is willing to impose new consequence unless all “unjustly imprisoned’ American citizens are released by Iran.

The White House announcement comes at the heels of a new administration policy — banning Americans from visiting another country known for imprisoning Americans — North Korea.

In addition, Congress has moved forward with legislation imposing new sanctions on Iran, North Korea and Russia, adding to the pressure now coming from a U.S. government freed from the previous policies of trying to appease Iran.

Of course, none of this stopped the Iranian regime from making its own demands and accusing the U.S. of holding Iranian citizens in “gruesome prisons.”

“You are keeping our innocent citizens in gruesome prisons. This is against the law and international norms and regulations,” said Sadegh Larijani, head of the regime’s judiciary, quoted by Iran’s state broadcaster.

“We tell them that you must immediately release Iranian citizens locked up in US prisons.”

Foreign Minister Mohammad Javad Zarif accused Washington of holding Iranians on “charges of sanction violations that are not applicable today… for bogus and purely political reasons”, at a meeting of the Council on Foreign Relations think-tank in New York last week.

Larijani also criticized the seizure of Iranian assets in the United States, such as a recent ruling to seize a Manhattan skyscraper to compensate victims of terrorism.

“They confiscate the assets of the Islamic republic. This is a blatant robbery. Americans behave as a bully and they want to oppress people of other countries,” he said.

Larijani’s comments deserve a good chuckle or at least a shocked gasp considering how abysmal Iranian regime’s prisons are, including the notorious Evin prison, as well as the regime’s reliance on medieval punishments such as public hanging and amputations.

Of course, given the regime’s past history of using hostages as pawns, the Larijani’s rhetoric may just be an opening prelude to another offer by the regime to swap Iranians convicted of smuggling material out of the U.S. for Wang and other Americans.

Remember, Iranian regime already has a taste of a quiescent U.S. in the prisoner swap from 2016, and may be lining up to orchestrate a similar move.

Even Reza Marashi of NIAC, acknowledged a similar move was afoot.

“I think it’s pretty clear that the Iranians are looking for another prisoner swap,” Marashi told Newsweek Monday.

The larger policy question for President Trump will be, if the regime offers a repeat of 2016, will he take the deal?

We would caution that doing so only encourages the Iranian regime to take even more hostages in 2018.