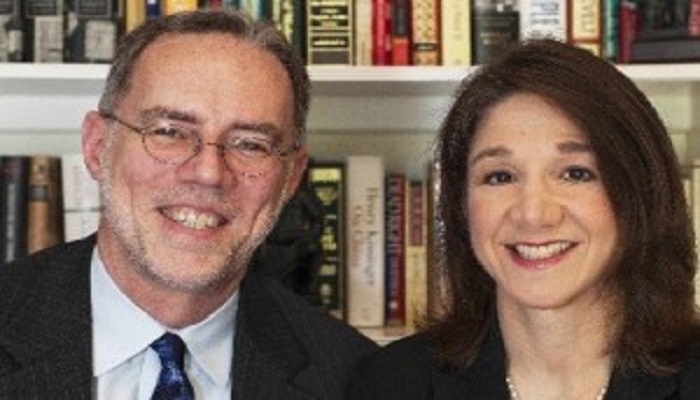 Among the top of the list of Iran appeasers are Flynt and Hillary Leverett, both former US government officials.  Flynt was a member of the National Security Council (NSC) for about a year, until forced to leave in mid 2003.[1]

The Leveretts, according to a NY Times writer, “have drunk the Islamic Republic’s Kool-Aid to the last drop.”[2]  They are also known as “America’s most prominent, and abrasive, defenders of the Iranian regime.”[3]

Flynt published “Inheriting Syria” in 2006 and then he turned his attention to Iran.  His next book, co-authored with his wife, titled, “Going to Iran; Why the US Must Accept the Islamic Republic of Iran,” was released the following year.  It asserts the US should negotiate directly with Iran if it hopes to prevent the regime’s development of a nuclear weapon and deal with other political and security issues.

Like other Iran appeasers, the Leveretts avoid any condemnation of the regimes’ repressive and intolerant rule.  They oppose economic sanctions, calling them “inhumane and illegal,” but are voiceless about the regime’s inhumane torture, flogging, and other attacks on its citizens, especially minorities.

Flynt defends the regime’s misogynist laws, claiming “this notion of gender apartheid is just belied by the reality of modern Iranian society.”[4]

The Leveretts said the US should craft “a deal recognizing Iran as an independent, truly sovereign and rightfully rising power in its own region – as the United States did with China 40 years ago.”[5]

But this analysis is deeply flawed.  In the mid 1960s, a schism began to develop between the Communist governments of China and the Soviet Union.  The rapprochement between China and the US was a strategic decision on both their parts to counter Soviet power and had nothing to do with wanting with China wanting to be recognized as an independent sovereign nation and rightfully rising power in the region.

The Iranian regime more closely is analogous to the Soviet Union, which sought to export communism around the world.  It never was agreeable to compromising its ideology and there is no evidence Iran’s mullahs are amenable to – or capable of – modifying their fundamentalist ideology.

Flynt says the Iranian regime wants “to see signs, indicating that the United States does want a fundamentally different kind of relationship with the Islamic Republic.”[6]  But he does not think it necessary for Iran’s mullahs to do the same.

Flynt, not surprisingly, is opposed to regime change in Iran.  This policy option, he said, is “built on the belief that Tehran is a house of cards waiting to be pushed over and if the US is smart enough, it could push the house of cards over, and I think this is not a very prudent way to proceed.”[7]  This same excuse, he neglects to acknowledge, was often voiced in the past when discussing the Soviet Union.  Had the US not challenged the Soviet regime, its collapse would likely not have occurred.  It was prudent for the US to aggressively challenge Moscow and it is equally prudent today to challenge the Iranian regime’s totalitarian system.

In their defense of the mullahs, the Leveretts claim an “overwhelming majority of Iranians” prefer the current regime to a “secular liberal democracy.”[8]  This is a bogus comparison.  Iranians want freedom and democracy and a non-fundamentalist Islam and, if given a chance, would overwhelming vote the mullahs out of power.   There is widespread support in Iran for the People’s Mojahedin, which is both Islamic and pro-democratic.

Articles by the Leveretts have been featured on the NIAC and CASMII websites.   Flynt has also participated at NIAC conferences.

[4] “The Way Forward in Iran: Engagement or Regime Change,” Atlantic Council of the United States, March 3, 2010.

[6] “The Way Forward in Iran: Engagement or Regime Change,” Atlantic Council of the United States, March 3, 2010.