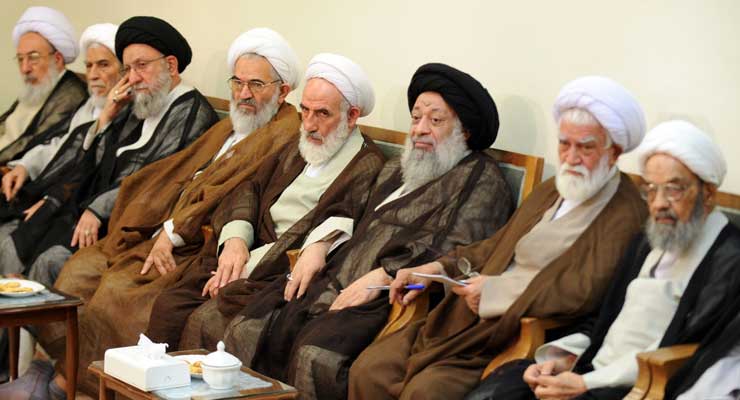 From the beginning of the Islamic revolution, the mullahs and religious cleric followers of Ruhollah Khomeini secured for themselves a nation-state completely under their control. Over three decades before ISIS spawned its own dreams of an Islamic caliphate, the mullahs in Tehran had already achieved that goal.

As a religious state, the Iranian regime stands virtually alone in a secular world of nations governed by parliaments, democracies, constitutional monarchies and even communist or socialist regimes.

For the mullahs, there were only one goal they had: To preserve power under the banner of the Islamic revolution and expansion and exporting of that same revolution.

Iranian regime’s constitution is emblematic of those priorities; vesting all final authority with the supreme leader, especially critical areas such as foreign policy, the military and judiciary. The control of virtually all sectors of Iranian life places the Iranian people squarely under the thumb of the mullahs.

With each beating given out, with each Iranian thrown into prison, with each public execution, the mullahs attempt to enforce their control over the Iranian people and in doing so only sow the seeds of discontent deeper into the soil of Iranian society from which springs for dissent and discontent in ways large and small.

For the mullahs, each rising level of defiance has to be met with even more brutal suppression because allowing even a small crack or glimmer of hope to shine through would only undermine their rule and bring forward the prospect of regime change.

This explains why the mullahs are always seeking provocations to fight against or blame for their own inadequacies. It is also why they regularly snatch hostages and balance their fate against the needs of the religious regime.

The mullahs inability to improve the economy following the nuclear deal points to their own ineptness, as well as their priorities to shift billions in recovered funds, as well as a $400 million ransom payment for American hostages, to use not for the Iranian people, but to line their own pockets and continue to fund their terrorist proxies in wars in Syria, Iraq and Yemen.

Regime-controlled media, as well as the Iran lobby have been busy pushing the idea that the lack of progress in improving the Iranian economy is to be blamed on the U.S. failure to open up all financial channels for the mullahs’ use.

Mohammad Javad Larijani, the head of the regime’s judiciary council , was quoted citing perceived serious flaws in the nuclear agreement leaving Iran without benefits it was promised.

“The US has completely retained the structure of the sanctions, and is not intending to lift them in the near future,” he said.

The flawed documentation and ill-definition of commitments in the JCPOA and the subsequent UN Security Council Resolution 2231 enable Washington to make very little concessions to Iran, Larijani explained, adding that having control over how to interpret the deal has given US politicians the power to impose what they want.

That point of view by the regime was reinforced over and over by statements by top mullah Ali Khamenei who claims that the duty to lift all sanctions lies with the U.S. and failure to do so would end up negating the agreement.

It is conspicuous Khamenei makes these claims on the eve of the U.S. presidential elections in which the days of the current administration are numbered as is the continuation of the same policy of appeasement it has been following for the past two years.

What remains is a violent regime bent on preserving its religious control over the Iranian people and willing to commit any atrocity to achieve it and preserve its Islamic revolution.

If the world truly wants a free and democratic Iran, the first step will have to be the continued opposition to the rule of the mullahs and the empowerment of the Iranian people through the dissidents and oppressed fighting for their freedom.