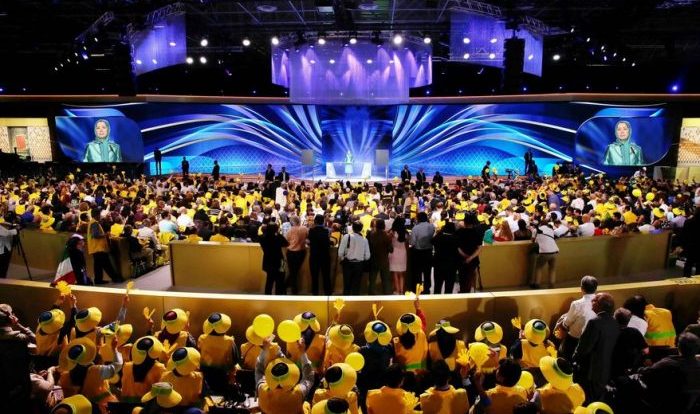 Near the airfield where 90 years ago Charles Lindbergh ended his historic solo flight across the Atlantic Ocean, gathering took place at the cavernous convention halls near Le Bourget Airfield on a similar historic occasion last Saturday.

It is here an estimated 100,000 friends and supporters of over 300 human rights and Iranian dissident groups joined dignitaries and elected officials from around the world in what has become the largest annual gathering opposed to the rule of the mullahs in Tehran.

This gathering has deep roots in the struggle for freedom and democracy in Iran and represents the largest thorn in the side of the ruling religious leaders of the Iranian regime. These groups included the People’s Mujahedin Organization of Iran (PMOI) for which mere association constitutes treason as far as the mullahs are concerned and punishable by death.

While the polarization in American politics as personified by the supporters of Donald Trump and Hillary Clinton are often contentious and biting, it’s hardly conceivable that being a registered Democrat or Republican would warrant a death sentence, yet in Iran, membership in an outlawed political movement is, which makes this event more admirable for the determination of the participants to literally put themselves and their families at risk by merely attending an event that is viewed with such intense hatred by the leaders of the Iranian regime.

Why then did they come?

The overwhelming majority are ex-pats caught outside of Iran during the Islamic revolution in 1979 which saw the promise of a democratic overthrow of the Shah’s reign instead saw it usurped by the fanatical followers of the religious clerics that essentially stole the revolution and installed an Islamic state that far preceded the ISIS the world is grappling with today.

What was most impressive though to those unfamiliar with the Iranian resistance movement was the generational shift occurring with the large participation of young people; the children and grandchildren of the Iranian diaspora.

This Snapchatting, Instagramming, Reddit-loving generation energized a movement that was centered on the long struggle through the ‘80s and ‘90s and has given way to the connections being made on social media within and outside of Iran. Connections and sharing that has earned the wrath of the mullahs who have sought to crack down on these social channels by building their own version of the Great Cyber Wall of Iran to track and block the use of social media platforms.

Since the original Arab Spring protests were violently put down after being shared socially for the first time through mobile phones and apps, the regime’s intelligence services have relentlessly gone after bloggers and high profile social media stars in Iran; tossing many into prison and threatening them with even worse unless they became willing advocates for the regime.

This certainly hasn’t stopped many ordinary Iranians from creating their own forms of private protest; be it posting selfies of women without wearing mandatory hijabs on Instagram or spreading copies of bloated and inflated paycheck stubs of Iranian officials caught in the center of corruption scandals.

Most importantly of all, last week’s gathering provided an opportunity for the governments of the world to unite in supporting the opposition movement with representatives that read like a roll call at the United Nations General Assembly. It was an inspiring scene repeated each year to see a cavalcade of members of parliaments, Congressmen, military officers and even a former U.S. presidential candidate of two lead a packed convention hall in advocating for a free and democratic Iran.

Most notably, for the first time a high-ranking member of the Saudi royal family came to endorse the movement’s efforts in Prince Turki bin Faisal Al Saud.

All of which points out a significant issue for the rest of the world. The resistance movement’s leader, Maryam Rajavi, is one of the most unique and influential political leaders today.

She is a moderate Muslim woman, leading one of the largest moderate Muslim movements in the world, who warned almost 20 years ago of the dangers posed by the rise of radicalized Islam, only to see her warnings come true during 9/11 and now with the chaotic civil war in Syria and the spread of ISIS and Iranian regime influence around the world.

To say the world is a more dangerous place now would be an understatement as we have seen with brutal and eye-opening terrorist attacks in Sydney, Boston, Ottawa, Paris, Brussels, Orlando, San Bernardino, Istanbul, Baghdad and Bangladesh. The litany of places struck could fill a Fodor’s travel guide around the world.

Yet the National Council of Resistance of Iran, which Rajavi leads, has been at the forefront in laying out a plan to combat this rise in radicalization and offering a roadmap for regime change in Iran that leads back to a democratic, non-nuclear, multicultural and pluralistic society.

One that does not hang political opponents. One that does not condone eye gouging, acid attacks, amputation and other medieval punishments as law enforcement. One that recognizes the value and rights of women, gays and the young people.

What last week’s landmark events also accomplished was refute the endless stream of false accusations and straw men perpetuated by the Iran lobby, which is supported by the Iranian regime. This collection of bloggers, journalists, lobbyists and false front organizations such as the National Iranian American Council, act in concert with agents of regime intelligence services to push out a false narrative that seeks to discredit the resistance movement.

More importantly, the Iran lobby seeks to preserve the few gains it has made in securing a fatally flawed nuclear deal and now pushes to open the lines of commerce to fund the regime’s badly depleted bank accounts, drained after years or proxy wars in Syria, Yemen and Iraq.

Ultimately, the success of this gathering will not be in the headcount of attendees, glowing press reports or posted selfies of attendees, but rather in the stark reminder to the mullahs that an energized, optimistic alternative to their nihilistic rule exists and it’s made up of Iranians.