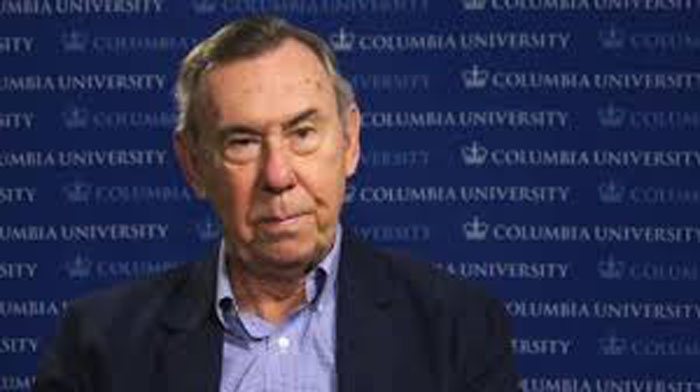 Gary Sick, a former US naval intelligence officer and professor at Columbia University, is one of the most outspoken appeasers of the Iranian regime.  He believes the mullahs changed their stripes long ago and Iran is no longer the “fanatic, belligerent state” of the early 1980s.  “The Iran of 20 years ago,” Sick said in 1999, “is not the Iran of today.”[1]

Iran’s reform movement, according to Sick, began with the presidential election of Hashemi Rafsanjani and then continued when Mohammed Khatemi “was elected in May 1997 on a platform “dedicated to civil society, rule of law, and reconciliation with the international community.”[2]  Sick claims the regime now is “more cautious, more calculated and more susceptible to conventional methods of calculation of state interests.”[3]

Sick believes if the leaders of Iran and the US would just sit down across the table from one another they could resolve major foreign policy differences that exist between the two countries.

Sick thinks Hassan Rouhani’s presidential election has ushered in a new era.  “You have a new president of Iran, Hassan Rouhani – he is a moderate and he is absolutely committed to finding a solution to this nuclear issue,” gushed Sick in January 2014.[4]

Sick had a different view of Rouhani in 2000 when discussing then-President Khatemi’s achievements.  Sick touted his success in “changing the entire nature of the Majlis.”[5]

“[I]n the last election in the year 2000,” Sick said, “three out of four people in the Iranian Majlis were kicked out.  The old-timers were replaced with reformers.”[6]  Among those given the boot was Rouhani, who had served five terms in the parliament.

Sick, like other apologists, remains blind to Rouhani’s hardliner past.  In his early years, Rouhani was a close confident of Ayatollah Khomeini.  He first met the ayatollah in 1963 and was a political firebrand, jailed more than 20 times, and was closely monitored by SAVAK, the Shah’s secret police, for his opposition to the monarchy.

Rouhani was richly rewarded for supporting Khomeini and his revolutionary policies.  Few people in the regime have achieved a more illustrious career.  In addition to serving in the Majlis, Rouhani managed numerous military commands and was appointed by Supreme Leader Khamenei to the Supreme National Security Council (SNSC), Iran’s highest decision-making body for security issues.[8]Rouhani was also the national security advisor to two presidents and was elected to the Council of Experts, which selects the supreme leader and oversees his actions.

Needless to say, few, if any leaders in the regime have been more trusted to support the Islamic revolution and its export of ideology to other countries.

Rouhani’s true colors were demonstrated in July 1999 when students rallied against the government after violently attacking a group of students at Tehran University.  Khatami called the assault on the students an “ugly bitter incident” and expressed “deep regret.”[9]

Rouhani sided with the attackers.  To counter the student demonstrations, the regime organized its own rally that featured senior clerics from Iran’s most conservative government bodies.[10]  Rouhani, one of the main speakers, declared:

“At dusk yesterday we received a decisive revolutionary order to crush mercilessly and monumentally any move to these opportunist elements [student rallies] wherever it may occur.  From today our people shall witness how in the arena our law enforcement force…shall deal with these opportunists and riotous elements, if they simply dare to show their faces”[11]

Rouhani said the demonstrators would be “tried in our court as mohareb and mofsed (opponents of the republic) and those found guilty would be hanged.”[12]  Rouhani said “Our revolution needs a thorough cleanup, and this will help advance the cause of the regime and the revolution.”[13]

Rouhani participated in the decisions to mount numerous terrorist attacks and assassinations.  He was a member of an “extralegal” organization called the Omure Vijeh Committee (Committee for Special Operation or Special Affairs Committee), according to a high-ranking Iranian intelligence officer who defected.[14]  The members of the committee instigated the terrorist attacks on the Israeli Embassy in Buenos Aires in 1992, the Jewish Center in Buenos Aires in 1994, Khobar Towers in 1996, as well as numerous other incidents and assassinations.

In 2005, Rouhani published a speech several months after he resigned as head of Iran’s top nuclear negotiator in which he described how he was able to dupe the international community and prevent the IAEA from referring Iran to the UN Security Council for violations of the Non-Proliferation Treaty, while successfully moving Iran’s nuclear programs forward.[15]

In the speech, Rouhani “boasted that while talks were taking place in Tehran, Iran was able to complete the installation of equipment for conversion of yellowcake – a key stage in the nuclear fuel process – at its Isfahan plant but at the same time convince European diplomats that nothing was afoot.”[16]

This same Rouhani, according to Sick and other Iranian appeasers, is now a “moderate.”  To recognize Rouhani for what he actually is, a hardliner and former trusted protégé of Khomeini, undercuts their premise that the regime no longer is the “fanatic, belligerent state” of the early 1980s.  Thus, the appeasers mislabel Rouhani’s politics as “moderate” in order to maintain their misguided understanding of the regime.

Other appeasement statements by Sick include:

Iran-Libya Sanctions Act – The legislation was passed in 1996 in response to Iran’s major terrorist attacks in Buenos Aires and the bombing of Khobar Towers that killed 19 American servicemen.  Sick called the Act an “absurd bit of legislation” and “pure demagoguery.”[17]

Sanctions – Sick said “unilateral sanctions do not work.”  [T]he notion that we’re going to drive it [Iran] into bankruptcy and thereby bring down the Islamic government are romantic and infantile pipe dreams.”[18]

Regime Change – Sick opposes regime change in Iran and has attacked the main Iranian pro-democracy organization that supports the overthrow of the corrupt theocracy.  Sick supports the regime’s rulers and is against the Iranian public, claiming, “There is no viable political alternative to the present system.  We may not like this regime, but we’re going to have to live with it.”[19]

Invasion – Sick said “Iran hasn’t invaded anybody for 250 years.  It’s not a country that is out to take over other people’s territory.”[20]  Not true.  Twenty-three months after Iraq invaded Iran, Saddam withdraw his forces from Iranian territory and sued for peace.  Iran could have ended the conflict on favorable terms but instead attacked Iraq in an attempt to overthrow Saddam’s regime and establish an Islamic Republic.  Sick also completely discounts Iran’s military and financial support for its surrogates, Hamas, a fundamentalist group that wants to remove Israel from the map, and Hezbollah, which seeks to establish a fundamentalist republic in Lebanon.  Iran’s Revolutionary Guards are fighting in Syria and Iraq.

Sick has worked closely with other pro-Iranian appeasement groups.  Notable is his support as a founding board member of the Center for World Dialogue, which sponsored the Cypress conference in November 1999 in which Trita Parsi and Siamak Namazi delivered their paper on setting up lobbying organizations in the US to remove sanctions on Iran.[21]

[21] “Why Does Columbia Host Ahmadinejad?” by Mohammad Parvin and Hassan Daioleslam, September 23, 2007.