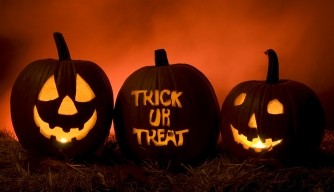 Halloween involves kids (and adults) firing up their imaginations to come up with costumes and then go knocking door to door seeking treats and getting the odd trick played on them maybe in a haunted house. For the Iran lobby, Halloween came a week early as the chief advocate, the National Iranian American Council, held its annual leadership conference this weekend.

It’s worth noting that the NIAC bills its event as a premier conference for the nation’s Iranian-American community, but its agenda and participants hardly represent the views and beliefs of the estimated one million Iranian-Americans living in the U.S.

In fact, the line-up of speakers at this year’s conference reads more like a line-up card of Iran regime boosters and potential business partners than any group seriously examining the daunting challenges remaining between the U.S. and Iran. What is even more amazing are the lack of any speakers who have first-hand experience with the abysmal human rights situation in Iran, nor were there any speakers offering views on the sizable opposition worldwide to the regime amongst the Iranian diaspora.

Among the highlights of this gallery of apologists and appeasers includes:

We can’t resist one dig at Reza Marashi of NIAC who called the gathering the “world cup of Iranian-Americans.”

One interesting tidbit were comments made by Dr. Farideh Farhi who lamented the fact the nuclear deal had not led to substantial changes in U.S. policy towards the regime, but failed to note the swift shifts in Iranian policy towards the rest of the world in the rapid buildup of its military in Syria and launching of a new ballistic missile in violation of United Nations Security Council sanctions; both provocative acts.

This was followed by a tweet by Trita Parsi, NIAC’s head honcho, who described comments made by Shadi Hamid, a senior fellow at the Brookings Institution, and Mehdi Hasan, a commentator for Al Jazeera’s English broadcast, as saying about the panic from neighboring Arab nations about the nuclear deal: “If someone panics, you slap them in the face, you don’t indulge them.”

An appropriate comment since it neatly encapsulates the Iran lobby’s response to concerns over what the Iran regime will do now in the wake of the nuclear agreement. The recent rise in belligerent military action, coordination with Russia in blasting Syrian rebels back to the Stone Age and the conviction of Washington Post reporter Jason Rezaian all point to a slide into anarchy which has even alarmed Democratic lawmakers who initially supported the nuclear deal, but now have begun offering up new legislation designed to keep the regime in check.

The NIAC conference was predictable in celebrating its perceived win with the nuclear deal and the effort now to safeguard potential foreign investment after “Implementation Day” on December 15 when the U.S. will pave the way by lifting economic sanctions and allow Iran to rejoin the world of international commerce.

But the conference also revealed the biggest weaknesses of the lobby which was its inability or unwillingness to meet the most troublesome aspects of the Iran regime head-on; namely it horrific human rights record which leaves a deep and wide trail for the world’s media to follow.

With every arrest, every beating, every public hanging and every denunciation of a minority religious or ethnic group, the regime weakens any argument the lobby can make and increases the pressure on groups such as the NIAC to answer basic questions of “why aren’t you speaking out against the killing of X group?”

Which is why the NIAC conference was so focused on economic issues since the regime is desperate to not only get its hands on the estimated $150 billion in frozen assets to help pay off its military obligations in Syria, Lebanon, Afghanistan, Iraq and Yemen, but is equally anxious to bring in foreign investment to help prop up an economy devastated by gross mismanagement and corruption by regime officials.