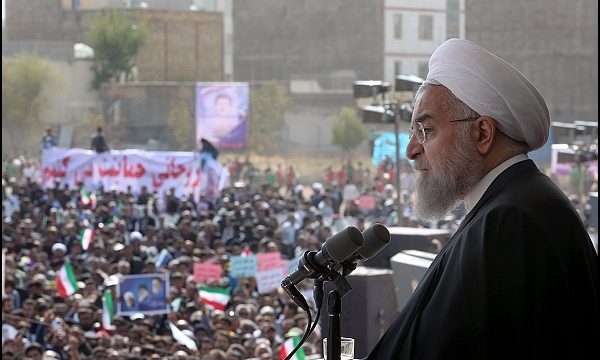 Hassan Rouhani Comments on US Election Despite Troubles Ahead

Hassan Rouhani addressed a crowd in the Iranian city of Arak and deplored what he called a “lack of morality” in the US presidential campaign and mocked the recent presidential debates in the his first public comments on a race to elect the next president who will have to decide to confront growing Iranian extremism.

“We have seen the way the (US presidential) candidates speak, accuse and mock (one another); and this is the American democracy and election,” Rouhani said.

Rouhani’s comments followed similar critical remarks made by top mullah Ali Khamenei who also lashed out at both Hillary Clinton and Donald Trump.

“The (ongoing) election campaigns in America and issues raised by the two candidates constitute a clear and evident example of the consequences of lack of spirituality and faith among those in power,” Khamenei said this weekend.

“During the coming weeks, one of these two candidates of America’s (presidential) election, whose remarks and condition you observe, will become the president of a country which has power and wealth and the biggest amount of nuclear weapons as well as the biggest media in the world,” he added in regime-controlled media.

The ramp up in comments by Khamenei and Rouhani indicate a new level of interest and worry by the Iranian regime as the sun sets on the Obama administration which has pursued a policy of appeasing the regime through the nuclear deal, lifting of economic sanctions and payment of ransom to gain the release of American hostages.

For the mullahs in Tehran the upcoming election is worrisome since both candidates have been especially harsh in condemning actions of the Iranian regime such as its long-running support for the Assad regime in Syria and the continued arrests of Iranian-American dual nationals.

The fact that Rouhani and Khamenei are wrestling with a stagnant economy, restless population, skyrocketing youth unemployment and the drain of maintaining three separate proxy wars in Syria, Iraq and Yemen, has threatened their hold over power, which has forced them to pursue an even harsher crackdown on human rights at home to prevent dissent.

The uncertainty of what a new US president will do in regards to Iranian policy has also trickled down to foreign banks and potential investor putting a hold on future investments until next year.

One can almost feel the sweat bead up on Rouhani’s forehead again.

It is ironic though to see Rouhani and Khamenei weigh in on the US election given the handling of their elections.  The Iranian regime historically has rigged its own elections as to make any outcome other than the one desired by the mullahs as moot.

The “stolen” election of 2009 that saw unpopular Mahmoud Ahmadinejad re-elected in a contest widely viewed as fraudulent is just one example. Another was the election of Rouhani himself in which all potential opponents were cleared off the ballot by a committee hand-picked by Khamenei.

The creation of the Iran lobby through organizations such as the National Iranian American Council helped facilitate the false perception that Rouhani was a “moderate.” Fortunately the world has had the benefit of seeing Rouhani in action—especially the year following the nuclear agreement—and has come to the realization that the Iranian regime is not interested in truly becoming a moderate nation.

Rouhani’s comments are even more ridiculous when you consider statements made by Ali Akbar Velayati, a key foreign policy advisor to Khamenei with Iran’s al-Alam television network, in which he claimed the regime opposed interference in the internal affairs of other countries.

“Iran opposes interference by any country, including Turkey or others, in the internal affairs of another country,” he said, adding that the domestic affairs of any country are its own concern.

The regime official rejected claims that Iran is interfering in the affairs of Iraq and said Tehran only provides Baghdad with military consultation at the request of the Arab country’s legitimate government, according to the regime’s PressTV.

The audacity for the regime to peddle such an obvious lie is amazing since the Iranian regime has almost gleefully inserted itself into the internal affairs of its neighbors in Syria and Iraq to a point where Syrians and Iraqis have openly complained of an Iranian takeover of their governments.

The regime’s use of terrorist proxies such as Hezbollah to carry out attacks and bombings in places such as Saudi Arabia, Lebanon, Afghanistan and even Argentina point out how far the mullahs are willing to go to meddle in other countries’ affairs.

Even the use of cyberhackers within the Revolutionary Guard Corps to attack US and European computer systems demonstrates the level of willingness to interfere in virtually all aspects of other nations’ affairs.

It’s now clear that the policy of appeasement of the mullahs to help “moderates” in Iran has failed, and the next president must define a firm policy towards the mullahs in Iran, if it wants to prevent the spread of terror and extremism in the region.