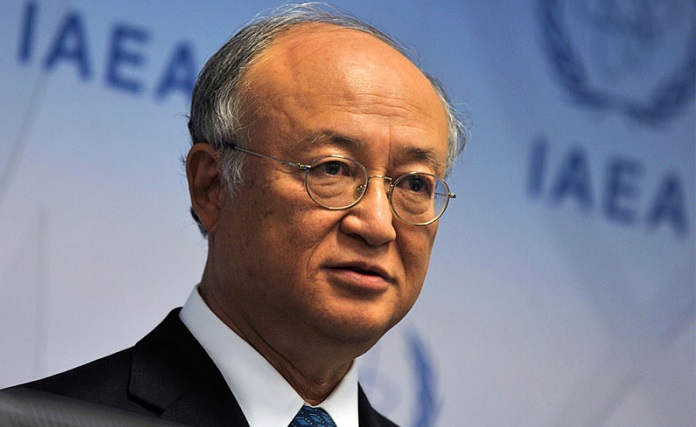 In a blunt rebuttal to demands from the Iran regime’s top mullah Ali Khamenei that Iran’s military facilities remain off limits to nuclear inspectors, Yukiya Amano, director-general of the International Atomic Energy Agency said that inspectors must be permitted access to suspect sites for “years and years” in order to become confident that Iran’s nuclear program was indeed peaceful.

“We will continue these activities for quite a prolonged period of time and then, after making our efforts, we come to the point when we can provide credible assurance that there is no indication of activities other than peaceful activities,” Mr. Amano said at a news conference. “This is a long process and full cooperation from the country is needed.”

He added there was no way to tell how long it would take the IAEA to be satisfied about the regime’s nuclear program, but acknowledged it was a question of years and not months contrary to the pronouncements being made by many allies of the Iran regime, including its aggressive lobby in the U.S. and Europe such as the National Iranian American Council.

Amano’s position has been repeatedly bolstered by Western leaders such as French Foreign Minister Laurent Fabius who has contended that if anytime, anywhere access was not granted by Iran to its military facilities, a nuclear deal was off the table.

Iran has spent considerable effort to hide its nuclear activities at military sites, including questions about high explosives testing at its Parchin site which could be useful for detonating nuclear weapons. Tehran has refused to allow IAEA inspectors renewed access to Parchin for years after the secret work being conducted there was revealed by members of Iranian dissident groups including the National Council of Resistance of Iran.

The IAEA is not new to this delaying effort by the regime. It has previously sent to the mullahs in Tehran a list of 12 areas of concern over the military aspects of Iran’s nuclear program and to this day, the regime has chosen to ignore those inquiries in contradiction to its earlier claims of cooperation at the start of nuclear talks almost three years ago.

But the stonewalling of the IAEA by Iran is just one stone of an entire wall of obstruction by the regime’s mullahs who have already sought to delink its ballistic missile program from nuclear talks, as well as recent revelations showing that Iran’s stockpile of enriched uranium actually grew instead of shrank during the past few of months of an interim framework agreement to reduce nuclear material.

With the June 30 deadline fast approaching, it is becoming rapidly clear that Iran’s continued reluctance to cooperate on a slew of outstanding issues is threatening to derail the entire negotiating process.

The worrisome nature of Iran’s obstruction has prodded Senators to offer up amendments to the defense budget requiring continuation of sanctions in force since 1996 for another 10 years in light of the regime’s failure to comply.

The stage is set and the regime is clearly failing to uphold its end of the bargain…again.