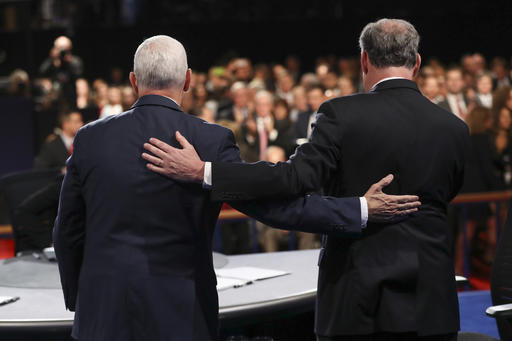 Last night’s vice presidential debate had its usual highs and lows, sprinkled with verbal fisticuffs and even some thoughtful answers, but the most interesting tidbit that came through was the sharp disparity over the Iran nuclear deal in which Democratic running mate, Sen. Tim Kaine (D-VA) all but gushed over the deal’s alleged stoppage of nuclear weapons versus Gov. Mike Pence’s (R-ID) blistering retorts against it.

Putting aside the relative merits of each side’s arguments, the larger question that needs addressing is “how did the nuclear deal ever become a partisan talking point?”

In many ways, it’s lamentable and regrettable that it has gotten to this point. For much of the past three decades both parties have been uniformly united over confronting Iran. That lock-step solidarity is what has driven the vast majority of successes against the Iranian regime such as the imposition of stiff sanctions following the crackdown on demonstrators to the stolen 2009 presidential elections.

Even top mullah Ali Khamenei recognized the terrible blows to the regime’s economy that resulted from those bipartisan sanctions when he summarily decided that the regime needed a new “moderate” face to win back international support after a deplorable eight years of Mahmoud Ahmadinejad.

The regime also recognized that in putting forth a “moderate” face, it had to cobble together a better lobbying effort to drive wedges in the united political front America and its allies had presented for much of the regime’s existence.

Those twin goals led to Hassan Rouhani’s selection and the creation of lobbying groups such as the National Iranian American Council and its offspring, NIAC Action.

Happily for the mullahs, the Obama administration was looking for a foreign policy win to close out its term having been unable to solve the puzzle of wars in Iraq and Afghanistan and the rising tide of Islamic extremism that sprang forth from the Syrian civil war and Iranian regime’s use of terror proxies throughout the region.

It was an unfortunate decision because it enabled the Iran lobby to begin driving that wedge between Democrats and Republicans and shaping a message that if you supported Iran deal you were for peace and if you were against Iran deal you had to be for war.

Most Democrats frankly didn’t buy it as leading members of Congress such as Sen. Robert Menendez (D-NJ), Sen. Ben Cardin (D-MD), Sen. Chuck Schumer (D-NY) and Rep. Eliot Engel (D-NY) opposed the Iran nuclear deal, but the Iran lobby worked furiously to try and shape the debate as a Democrat vs. Republican one when in fact it wasn’t.

For other Democrats, the choices were simpler in which they chose party loyalty in an election cycle, many privately hoping to impose additional sanctions after the presidential elections.

In fact, in the year since the Iran deal was approved, and the mullahs have showed their true nature with the widening of the wars in Syria, Iraq and Yemen, as well as the renewed crackdowns and human rights violations at home and escalation of its ballistic missile program, many of these same Democrats have offered up new proposals to impose new watchdogs or sanctions on Iranian regime.

Coupled with the fact that the mullahs have obliged by going on a binge of militant and aggressive acts including threatening US warships in the Persian Gulf and snatching up even more dual nationals for future hostage swapping, it is almost certain that after the November elections, the US will once again present a united front in confronting Iranian regime’s extremism.

But that prospect hasn’t stopped the Iran lobby from desperately trying to make Iran a partisan issue as NIAC head, Trita Parsi was busy tweeting out his enthusiastic support for Kaine’s comments in support of the nuclear deal, probably had to make many Clinton supporters cringe slightly.

In regards to the actual facts surrounding the nuclear deal, the media fact checkers waded through the statements and found some by Kaine to be slightly wanting of clarity.

From the Washington Post: “The deal, which has been sharply criticized by Republicans, did increase the amount of time that Iran would need to build a nuclear weapon by reducing its centrifuges for uranium enrichment and its stockpile of enriched uranium. But the deal expires in 15 years, and Iran’s nuclear infrastructure remains in place.

“While Iran has insisted it has no interest in building nuclear weapons, the deal does not eliminate the risk that it will obtain nuclear bombs.”

A report released this September by the Institute for Science and International Security found that the deal will also allow, through an exemption, Iran to keep 50 tons of heavy water and “continue operating 19 ‘hot cell’ radiation containment chambers.”

Possessing materials such as enriched uranium and heavy water does not necessarily mean Iran will have the capacity to restore its nuclear program. The deal will not allow nuclear inspectors to confirm, however, whether or not Iran is complying with the deal. Iran got negotiators to agree that no U.S. nuclear inspectors will be allowed on Iranian soil, according to Breitbart News.

Ultimately, the issue of containing and confronting the Iranian regime has historically been a bipartisan effort. We hope that after November, it once again becomes bipartisan.