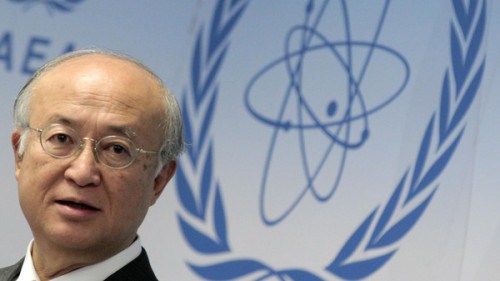 International Atomic Energy Agency (IAEA) Director General Yukiya Amano reacts as he attends a news conference during a board of governors meeting at the UN headquarters in Vienna November 29, 2012. The U.N. nuclear agency made no progress in a year-long push to find out if Iran worked on developing an atomic bomb, its chief said on Thursday, calling for urgent efforts to end Tehran’s standoff with the West. Amano said he would not give up seeking to end what Western diplomats describe as Iranian stonewalling of the agency’s investigation into possible military dimensions to the Islamic state’s nuclear programme. REUTERS/Herwig Prammer (AUSTRIA – Tags: POLITICS ENERGY HEADSHOT TPX IMAGES OF THE DAY) – RTR3B0LF

Like twin hammer blows, breaking news concerning the Iranian regime came out revealing that the two issues the Iran lobby have tried mightily to keep separate and growing more entwined; namely human rights and the nuclear agreement given to the regime last July.

The Iran lobby, led by the National Iranian American Council, rabidly argued that human rights issues – which the regime has an abysmal record on – needed to be decoupled from any nuclear agreement because it could jeopardize momentum for an accord and was outweighed by the perceived benefit of gaining an agreement with the regime.

The logic being, as advanced by regime stalwarts such as Trita Parsi, was that an agreement would empower “moderate” elements led by Hassan Rouhani and usher in a new period of cooperation with the West.

Unfortunately for Parsi, the opposite has come to happen. Reuters reported on a confidential International Atomic Energy Agency report it gained access to which describes that the regime’s stockpile of low-enriched uranium has actually increased instead of decreased under the terms of the agreement.

Iran’s stockpile of low-enriched uranium had increased by 460.2 kg in the past three months to 8,305.6 kg, the report said. Under the deal with major powers, that stockpile must be slashed to no more than 300 kg.

That quick restart ability is being preserved also at the Arak nuclear reactor where a regime member of Parliament said it could be reactivated within as little as six months unless all sanctions against the regime were lifted quickly.

“If the Americans break the terms of the Joint Comprehensive Plan of Action (JCPOA) regarding lifting the sanctions, Iran will activate the Arak reactor within six months,” ISNA news agency quoted head of National Security and Foreign Policy Commission, Alaeddin Boroujerdi, as saying.

The threats have only increased as top mullah Ali Khamenei has voiced displeasure over the slow pace of lifting sanctions repeatedly warned the regime would restart its nuclear program unless all sanctions were lifted at once. This is of course at odds with what was actually agreed to last July under the Joint Comprehensive Plan of Action (JCPOA), but it fits with the regime’s pattern of rewriting international accords even before the ink dries to suit its needs.

This pattern of purposeful evasion by the regime also applies to its callous treatment of human rights of its own people, including religious minorities such as those who follow the Baha’i faith who recently have been subjected to mass arrests, Iranian women who have been threatened with arrest for driving cars without proper coverings, and even social media administrators getting rounded up.

But the world is beginning to take notice and coming on the heels of the Friday the 13th massacres in Paris, showing a greater willingness to confront extremist views prevalent in the Iran regime and terror networks such as ISIS, as evidenced by a vote by the United Nations General Assembly’s human rights committee which approved a resolution expressing deep concern about rights violations in Iran by a 76 to 35 vote.

The resolution is the 62nd resolution the UN has adopted censuring the regime for its ongoing human rights violations. This resolution stemmed from the recent report issued by Ahmad Shaheed, the UN Special Rapporteur for human rights in Iran.

The victims of such treatment include political opponents, human rights defenders, women’s and minority rights activists, labor leaders, students’ rights activists and others, the resolution said.

The regime’s notorious Revolutionary Guards Corps has rounded up artists, journalists and U.S. citizens as part of a crackdown on what it has called Western infiltration.

The crackdown includes announcements this week of 170 people arrested in Qazvin Province in Iran, a number of others in Gilan Province, and five journalists in Tehran, all by Iran’s Revolutionary Guards, amounts to the largest crackdown since the violent state suppression of the protests that followed the disputed 2009 presidential election in Iran.

The 170 arrested were called “managers of groups active in mobile social networks,” which the regime claimed for acting “against moral security” and distributing “indecent and immoral” content in the form of text and images that “encouraged people to commit obscene acts” and “insult ethnic minorities, officials and distinguished national figures,” according to the Fars news service.

Even with the increased criticism over human rights, the mullahs in Tehran may believe they have an ace up their sleeve with the Paris attacks which they believe may aid the regime in keeping Assad in power and shifting attention away from its involvement in the civil war.

The Guardian in an interview with a MacArthur fellow at King’s College London, said:“I think Iran might think that the Paris attacks give it an upper hand over Syria because naturally it gives a little bit more credibility to the rhetoric that combating Isis is more important than combating Assad.

“Iran will think that its position will be strengthened as the result of the attack but I am not sure it necessarily will. The only thing that the Paris attacks will really change is rhetoric in the west but I’m not sure if it changes much on the ground. France is going to say that the focus is going to be on attacking Isis. To be fair, that’s always been the focus but that hasn’t detracted away [from] trying to get rid of Assad,” she said.

Ultimately, the West must focus on tying the Iranian regime’s human rights record back into judging its progress towards dismantling its nuclear infrastructure as well as its support for terrorism abroad. Without that linkage, the regime is as well shielded against any meaningful reforms as ISIS is from attack if it was using human shields.