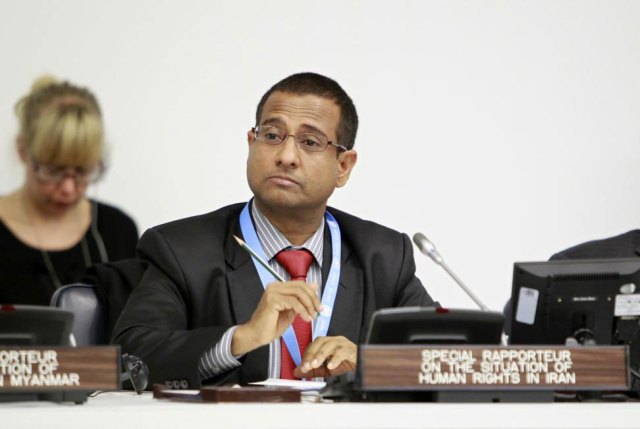 Human Rights in Iran Get Worse and Ignored

An attempt by allies of the Iranian regime at the U.N. Human Rights Council to block the renewal of the appointment of a special investigator into Tehran’s human rights record failed and reinforced the bid to keep a spotlight on the regime’s dismal human rights record.

Support for renewing the five-year-old mandate of Ahmed Shaheed, the independent “special rapporteur” for human rights in Iran, was far from overwhelming, however. The 47-member HRC approved the resolution by a 20-15 vote, with 11 countries abstaining.

The regime got more support now than it did at the time the special rapporteur mandate was first established in 2011, when the measure passed by a 22-7 vote, with 14 abstentions after a furious lobbying effort by the regime.

Shaheed has angered the regime with annual reports highlighting severe violations, while receiving the backing of mainly European and Latin American democracies, in addition to that of the regime’s regional Arab rivals, including Saudi Arabia, Qatar and the United Arab Emirates.

Iranian and international human rights advocacy organizations say Tehran’s human rights record has worsened in recent years, notwithstanding the election in 2013 of the ostensibly “moderate” President Hassan Rouhani, and despite the diplomacy that led to the nuclear agreement last year.

The attempt to vote down the Iran human rights mandate alarmed these groups. Previous such efforts succeeded in getting special rapporteur mandates for human rights in Cuba and Belarus halted in 2007.

Shaheed submitted his annual report prior to the vote, recording abuses in Iran including mistreatment of religious minorities, a “widening crackdown on freedom of expression and opinion,” and a 20-year high in executions.

The regime dismissed the charges contained in the report as “imaginary.”

“The report on the Islamic Republic of Iran is politically-motivated, discriminatory and biased,” foreign ministry spokesman Hossein Jaberi Ansar said last week. “It has been written on unwarranted information and not existing realities.”

Iran for the past five years has refused permission for Shaheed, a former Maldivian foreign minister, to visit the country in the exercise of his mandate.

“Change won’t happen overnight, as the Iranian state is based on principles that discriminate against women, ethnic and religious minorities, gays and numerous others,” UN Watch said. “Yet this important step keeps the item prominently on the international agenda and gives hope to oppressed citizens in Iran.”

Human Rights Watch interviewed lawyers, political prisoners, family members, and sources familiar with cases of detainees facing national security and political charges. Human Rights Watch documented several instances over the past year in which the detainees were denied access to lawyers during investigations or were forced to change their legal advocate under pressure by judiciary officials.

“While Iran claims the new criminal code has improved defendants’ rights, these efforts are meaningless if parliamentary amendments completely undermine the spirit of fair judicial proceedings,” said Sarah Leah Whitson, HRW Middle East director. “The incoming parliament should ensure that the criminal procedure law is actually a step forward rather than two steps back for the rights of its own citizens.”

According to HRW, Iran has consistently failed to prevent torture in detention and to investigate allegations of such abuse. Revolutionary courts use confessions obtained under torture as evidence in court. As a result, the right to access a lawyer from the time of an arrest is an important safeguard against abuses in detention.

A glaring example of this injustice came when brothers Mehdi and Hossein Rajabian, 26 and 31, and their friend Yousef Emadi, 35, were found guilty of “insulting Islamic sanctities”, “spreading propaganda against the system” and “illegal audio-visual activities” in a 2015 trial that activists said lasted no longer than three minutes. They were condemned to lengthy prison sentences without having access to lawyers whilst being interrogated, nor during the course of their trial.

According to Amnesty International, the three men were subjected to beatings and electric shocks to make forced confessions against themselves on camera while being in custody. Those confessions were then used as basis for their conviction in court, a familiar pattern used against prisoners of conscience in Iran.

“These sentences lay bare the absurdity of Iran’s criminal justice system, which brands individuals as criminals merely for peacefully exercising their rights to freedom of expression through making music and films. These young men should never have been arrested, let alone brought to trial,” said Said Boumedouha, deputy director at Amnesty International’s Middle East and North Africa program.

While the renewal of Shaheed’s mandate gives continuing hope of reversing these atrocities by the Iranian regime, the real answer for a change in Iran will only come when the world unites and works with the various Iranian dissident groups both within Iran and around the world to empower the Iranian people to achieve democracy and freedom for themselves in the future.