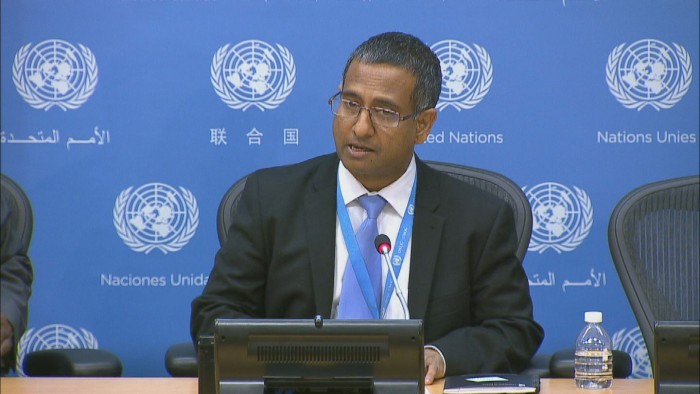 Ahmed Shaheed, the United Nations Special Rapporteur for Human Rights in Iran issued a new report saying that the Iran regime was on track to execute more than 1,000 people in 2015 in an unrelenting campaign of brutal human rights suppression that continues unabated after agreeing to a nuclear agreement that proponents said would shift the regime to a more moderate stance.

Calling it an “unprecedented assault on the right to life in Iran,” Shaheed described a surge in executions over the past year. He said Iran hanged nearly 700 people since January.

Shaheed said that within the past two weeks, the Islamic Republic violated international law by hanging two juvenile offenders. He added “there are dozens more waiting a similar fate on death row.”

According the New York-based Committee to Protect Journalists, at the end of last year, at least 30 journalists were held in Iranian prisons, including Washington Post reporter Jason Rezaian. Others have been detained since, and in August state media accused a senior Wall Street Journal reporter who once served as a correspondent in Iran of conspiring against the government. The Journal called the claims “completely false, outlandish and irresponsible.”

Sherif Mansour, the Middle East and North Africa program coordinator for the Committee to Protect Journalists, said in an interview with the Associated Press, reporters often get targeted because they are “much easier to frame” as spies.

Additionally, in more signs of a brutal crackdown, the regime jailed and sentenced two Iranian poets. Fatemeh Ekhtesari, a practicing obstetrician, and Mehdi Mousavi, a trained doctor who teaches literature and poetry, were first arrested in December 2013, months after Hassan Rouhani took office and sentenced to 99 lashes apiece for shaking hands with members of the opposite sex. Ekhtesari received an 11½-year prison sentence, while Mousavi got nine years on charges ranging from propaganda against the state to “insulting sanctities,” as well as the lashings, according to PEN America, an organization promoting literature and freedom of speech.

“I think people thought with the nuclear deal, there would be sort of a bit of a thaw as well or a bit of an opening up,” said Karin Deutsch Karlekar, the director of Free Expression Programs at PEN America. “I think the judiciary is sort of pushing back and trying to make clear that there isn’t going to be that opening people were hoping for.”

Shaheed’s report detailed a grisly butcher’s bill of death by the regime:

In addition to drug crimes, Iranian law applies the death penalty for a range of offenses: from threats to “the security of the state” to “enmity towards God,” also known as moharebeh, to “insults against the memory of Imam Khomeini and against the supreme leader of the Islamic Republic,” according to the State Department’s 2014 human rights report on Iran. “Prosecutors frequently used moharebeh as a criminal charge against political dissidents and journalists, accusing them of struggling against the precepts of Islam and against the state that upholds those precepts.”

Shaheed said a “deeply flawed justice system” that violates international standards and national laws sits at the heart of Iran’s human rights troubles. He said he continues “to receive frequent, alarming reports” about the mistreatment of detainees and the use of torture to obtain confessions. Many of the accused lack access to defense lawyers.

The authorities, he said, have also refused to acknowledge rights for gay, lesbian, or transgender individuals, saying it is incompatible with sharia law. And authorities have imposed harsh sentences, including the death penalty, for posting articles on social media deemed offensive to the government. A semi-official news outlet reported that more than 480 people were flogged during the first two weeks of Ramadan for not fasting.

The regime refused comment on Shaheed’s report and in fact has consistently refused to allow entry into Iran by Shaheed or any member of his office to see first-hand the human rights abuses going on in Iran.

In fact, while Shaheed was issuing his report, Rouhani was holding forth with state-controlled media IRNA in a ceremony welcoming the new Spanish ambassador to Iran, saying he believed sanctions on the regime would be lifted as early as the end of this year, again contradicting assurances by the nuclear deal proponents that the sanctions removal would only come after the regime had met its obligations for dismantling its nuclear infrastructure.

Clearly the regime remains committed to its policy of public executions and cares not a whit about international opinion on the matter.