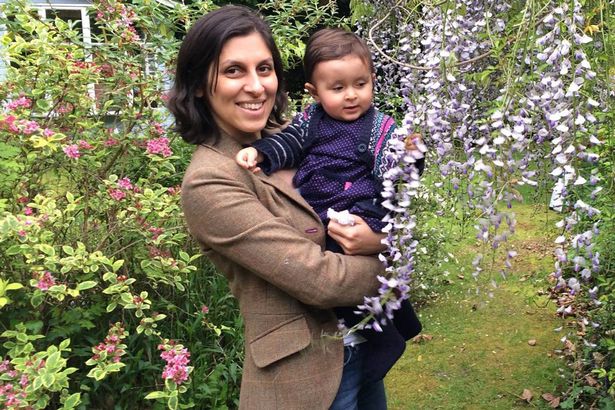 There are many perceived threats that the mullahs in Tehran see around them. Nazanin Zaghari-Ratcliffe, an aid worker for the Thomson Reuters Foundation, was accused of trying to “overthrow” the government in a statement published Wednesday after having been arrested since April 3, 2016 on the day she was to leave to go back home in Britain.

“This person had membership in foreign companies and organizations and planned and carried out media and cyber projects with the intent of a soft overthrow of the holy Islamic Republic government,” the statement said. It was published by a Revolutionary Guard office in Kerman province, where Zaghari-Ratcliffe is being held.

Zaghari-Ratcliffe “carried out criminal activities with the guidance and protection of media and spy services of foreign governments,” according to the statement. She was arrested after “massive intelligence operations” by the Guard.

Her husband Richard Ratcliffe dismissed the accusation that Nazanin was trying to bring down the government as “preposterous.”

“To my understanding there are still no formal charges. It seems like this is a political case,” he said.

The Revolutionary Guards statement seemed directed at the Thomson Reuters company, a global media powerhouse regarded with suspicion and hostility in Iran because of its British foundations. Reuters merged with Canada’s Thomson company in 2008.

“The media corporations of hegemonic governments, especially the evil-minded British media, have made their best efforts in the recent months to support her in order to weaken the Islamic Revolutionary Guards Corps’ determination but this false hope will never come true,” the statement added.

The fact that Zaghari-Ratcliffe worked for the Thompson Reuters Foundation and not the news company may indicate that the Revolutionary Guards intelligence unit is not so intelligent, but didn’t read the fine print and arrested her thinking she worked for the news organization in an effort to replicate the Rezaian snatch and grab with the Washington Post.

Ratcliffe said the family had contact with Zaghari-Ratcliffe earlier this week and she’d been moved to the notorious Evin prison in Tehran.

Monique Villa, the Chief Executive of the Foundation, said that Zaghari-Ratcliffe has been employed for four years as a project coordinator in charge of grant applications and training, and had no dealing with Iran in her professional capacity.

“The Thomson Reuters Foundation has no dealings with Iran whatsoever,” she said, and has no plans to.

Villa said that Zaghari-Ratcliffe “had traveled to Iran in a personal capacity. She was on a family holiday with her two-year-old-daughter Gabriella.”

Since Zaghari-Ratcliffe was a dual British-Iranian citizen, it should come as no surprise that regime officials scooped her up since it does not recognize dual status and has regularly arrested and imprisoned large numbers of dual citizens to be used as political pawns for prisoner swaps for example such as what the U.S. did for Washington Post reporter Jason Rezaian, Christian pastor Saeed Abedini and former U.S. Marine Amir Hekmati as a result of the nuclear agreement.

The Iranian regime has already plucked other dual citizens to replenish its prison cells including Siamak Namazi, a longtime supporter of the Iran lobby and Homa Hoodfor, a Canadian university professor, and now Zaghari-Ratcliffe.

No charges have been filed in the case, but Zaghari-Ratcliffe has told family members in Iran that she was forced to sign a confession under duress, her husband said last month.

Zaghari-Ratcliffe’s file has been sent to Tehran to begin judicial proceedings but officials from the intelligence wing of the Revolutionary Guard are still interrogating her, according to the statement.

The all-too-familiar pattern by the Iranian regime is being repeated here:

For the regime, it has been a recipe for success and until the rest of the world puts a halt to this despicable practice, it will continue.