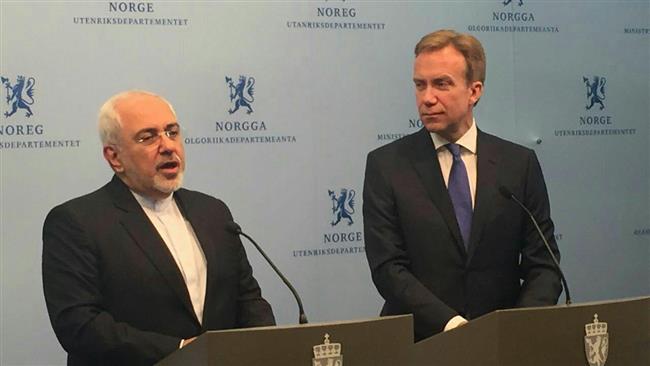 Iran Attendance at Oslo Forum is Height of Hypocrisy

The Oslo Forum was created in 2003 as a gathering for mediation practitioners to meet and share their expertise. It was aimed at the hope of building a larger community of mediation experts and increase learning, serving as an incubator for testing and honing future peacemakers hoping to resolve conflicts around the world.

It has grown from its first meeting of 17 practitioners to now include over 100 notable key players from the United Nations, intergovernmental and private organizations, journalists, analysts and other experts.

Among its participants has been a veritable who’s who of global ambassadors for peace, including former UN General Secretary Kofi Annan, President Jimmy Carter, new Myanmar leader Aung San Suu Ki and many others.

And like any progressive project, it has some more far-fetched ideas it has tried to implement including inviting Javad Zarif, the foreign minister for the Iranian regime to this year’s conclave in Norway.

While we know Norwegians are a kind, generous and thoughtful people, earnestly hoping and working for peace around the world, the participation of Zarif at this Forum to ostensibly share ideas for peace is one of the more incredulous things anyone has heard.

The Iranian regime stands alone in the world as the leading supplier and exporter for terrorism and proxy wars. Its Quds Forces and Revolutionary Guard are on the battlefields and shipping cash, arms and mercenaries to Syria, Iraq, Afghanistan and Yemen.

It has managed to become the second largest executioner of prisoners on the planet and regularly abuses its own men, women, children, ethnic and religious minorities, journalists, dissidents and just about anyone else the mullahs in Tehran have a disagreement with.

Zarif’s crowning achievement has foreign minister has been to snooker the world into supporting a nuclear agreement that essentially preserves Iran’s entire nuclear infrastructure, open the floodgates to billions in fresh cash and does not mandate any changes in its barbaric human rights practices.

That’s a neat trick and if the participants at the Oslo Forum are looking for tips on how to obscure the truth, they’ve invited the right man in Zarif.

No one can deny that Iran’s intervention in Syria is the single largest reason why the civil war has lasted this long and expanded so far. It is also the reason why Islamic extremist groups such as Al-Nusra and ISIS were able to spring into existence and expand.

The heavy military and economic involvement by the Iranian regime and refusal to engage in multilateral peace talks that involve any discussion of removing the bloody Assad regime from power has certainly shaped and molded the Syrian conflict into the bloody affair it is today.

All of which makes Iran’s participation in the Forum that much more curious since top mullah Ali Khamenei has been definitive and expressive in his beliefs concerning the use of violence and terror to achieve the regime’s aims. Compromise, negotiation, mediation and discussion are not words in the vocabulary of the mullahs.

That is certainly true when you look at the recent spate of arrests and imprisonments of dual-national Iranians who have been tossed into Iranian prison without charge or access to counsel, including a Canadian professor and a British mother.

It is also notable that during recent visits by various European leaders to Iran to seek out commercial trade opportunities with the nuclear agreement in effect, the Iranian regime did not slow down one bit the pace of executions, imprisonments and abuses during any of those visits.

Take for example Federica Mogherini, European Union policy chief, who visited Iran this past April only to see the regime execute three prisoners the day she arrived or Matteo Renzi, the Prime Minister of Italy, who visited Iran only to have the regime hang 17 people, including three juveniles at the same time.

These visits by European leaders and the inclusion of Zarif at a conference for peace negotiators makes a mockery of the human suffering in Iran and only emboldens the mullahs to continue with these practices since there seems to be no downside.

His participation is even stranger when you consider that the Iranian regime has opened up a recruiting center in Heart, Afghanistan to persuade and even coerce thousands of Afghans to fight in Syria.

The Christian Science Monitor visited the center and reported on what is no longer a secret in Iran as the regime seeks to bolster the number of mercenaries sent to fight for the Assad regime.

Some Afghans fight willingly for religious reasons, eager to take up a cause of “defending” Shiite shrines in Syria. Others fight for cash, upwards of $700 per month, or choose to realize promises of Iranian citizenship, schooling for their children, and jobs, if they survive the frontline – benefits usually beyond reach for Afghan migrants in Iran, the Christian Science Monitor reported.

Still other Afghans report coercion and intimidation, and say their second-class status inside Iran – among an estimated 3 million Afghans, only one-third are legal migrants – is taken advantage of. Afghans’ “vulnerable legal position in Iran and the fear of deportation may contribute to their decision [to join militias in Syria], making it less than voluntary,” Human Rights Watch said in a January report.

None of these revelations should be ignored at the Forum and in fact, Zarif should be confronted with these facts and asked why the regime has failed to work for peace in Syria instead of seeking to escalate the conflict.

Ultimately, as Zarif continues this European tour, he should be met with hard and tough questions and not platitudes and open arms.