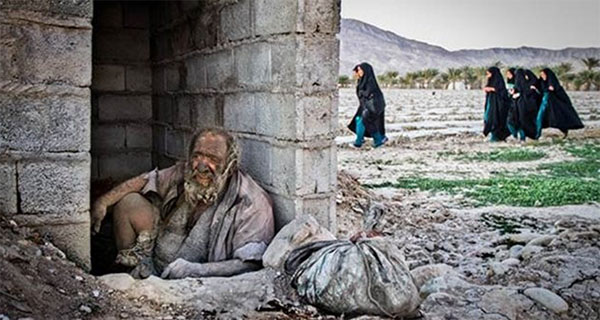 Iran Economy Delivering Only for Military and Regime Elites

The Iranian economy should be an economic powerhouse backed by one of the largest petroleum reserves in the Middle East and a population that historically has been one of the best educated and entrepreneurial.

The Iranian people have spread throughout the world as part of the diaspora stemming from the Islamic revolution and have helped make scientific advances, create masterpieces of art and build globe-spanning industries.

Yet, given all of these accomplishments, the Iranian economy remains mired in stagnant growth with huge unemployment numbers, especially for Iranian youth who face a bleak future. All too often their choices are to struggle in finding jobs or join the regime as part of its military to be sent off to fight and die in far-flung battlefields far from home.

The truth of the Iranian economy is that it has been shaped and molded to serve not the Iranian people, but to fund the whims and lavish lifestyles of the ruling elites, including the families of mullahs in a dynastic fashion, as well as prime the engine of war for the Revolutionary Guard Corps.

In Al-Arabiya, Tony Duheaume examined the contradictions in the economic windfalls benefitting the elites and the hopelessness and poverty being experienced by Iran’s poor.

“While many of Iran’s citizens have suffered all of the hardships of a failing economy, in a land of increasing unemployment and low pay, the ruling mullahs lead the lives of past emperors, living in absolute luxury, with billions they have made off the backs of the Iranian people, now insulating them from the crumbling nation they reside over,” he writes.

“Beggars wander the streets of Iran in droves, drug addicts with nothing to live for litter the thoroughfares, while the homeless find shelter where they can, some known to have taken up residence living under bridges, or in the sewerage canals that run alongside the country’s highways,” Duheaume added.

Duheaume pointed out a shocking photo essay published in the Shahrvand Daily last year that depicted many of these hapless vagrants sleeping in empty graves in Shahriar, a town about 12 miles from Tehran, the nation’s capital, in images that shocked the nation.

Reports suggested that at least 50 men, women and children were living in this cemetery, with many of their number addicted to drugs. Dressed in grimy rags, their emaciated, dirt-streaked features stare vacantly out of open graves, with only tattered tarpaulins or sheets of well-worn polythene covering the holes to protect them from the elements, in an area where the temperature in winter can drop to well below freezing, he said.

With hundreds of millions of dollars already pouring into the Iranian administrations coffers from released frozen assets, which could eventually total $150 billion, none of this has yet been designated to relieve the suffering of its people. Already billions have been earmarked to spend purchasing Russian T-90 tanks, artillery, advanced Su-30 fighter jets, and helicopters, and during 2016, Iran’s defence sector grew by 45 percent, with the regime spending billions on its long-range missile program, and the development of indigenous weapons systems, Duheaume pointed out.

There is also the delivery of long-promised S-300 air defence systems, said to have cost the Iranian government $900 million. On top of this there are the multi-billion dollars the regime is using to prop up Syrian President Bashar al-Assad, the $60-$100 million a year it is paying in financial assistance to Hezbollah, plus its expenditure in financial support or weapons to aid terror groups such as Hamas and the Houthis, he explained.

But at the other end of the social scale, Duheaume correctly pointed out the group that is siphoning off large amounts of the nation’s assets, are the ultra-rich mullahs that rule Iran, all of them claiming to live frugal lives, but who are in fact living in the lap of luxury, and are said to be squirreling away vast fortunes in foreign bank accounts.

The pictorial evidence of this lavish lifestyle appeared on social media as these children of the mullahs shamelessly posted selfies as they tore down Tehran streets in exotic sports cars swathed in haute couture fashion more appropriate to the catwalks of Paris and Milan.

Top mullah Ali Khamenei himself sits at the top of the ladder as far as the millionaire mullahs are concerned, known to be in control of a financial empire worth $95 billion, which far exceeds the accumulated wealth of the late Shah Mohammad Reza Pahlavi. It was Khamenei’s predecessor Ayatollah Ruhollah Khomeini, the founder of the Iranian Islamic Republic, who used the Shah’s plundering of the Iranian economy, and his unequal distribution of wealth, as one of the main excuses to depose him, and now this plundering has been repeated by his ousters, Duheaume said.

The mullahs have concentrated this wealth into their own pockets and have created a system designed to preserve their wealth and power. The Islamic regime does not tolerate dissent, nor does it provide for its people.

It deals with desperate pleas for jobs and aid from the Iranian people with crackdowns, mass arrests and imprisonment.

Any government that has to maintain control through fear and intimidation is not long for success.