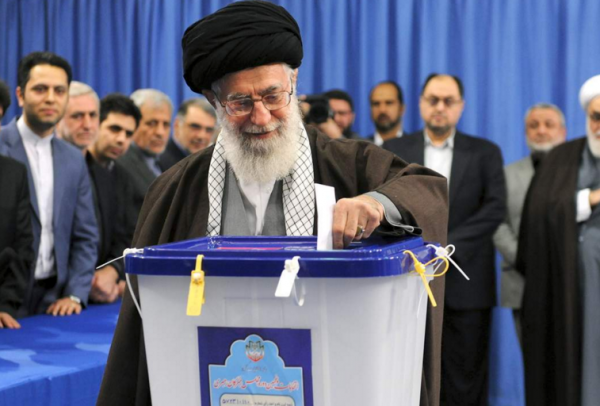 As the Iranian regime counts the ballots from this weekend’s parliamentary elections, the Iran lobby is already hailing it as a momentous victory for “moderate” forces in Iran in what may be one of the most blatant obfuscations since Adolf Hitler’s Anschluss of Austria based on the pretext of being invited in to restore order.

“The stunning setback of the hardliners in the elections is precisely why they opposed the Iran nuclear deal. They knew that if successful, the Rouhani faction would benefit electorally from the significant achievement of resolving the nuclear issue and reducing tensions with United States. These benefits would not just be limited to the parliamentary elections, but could establish a new balance of power in Iran’s internal politics with significant long-term repercussions,” said Trita Parsi, head of the National Iranian American Council and lead cheerleader for the Iranian regime.

His absurd comment came in a piece in Huffington Post in which he failed to acknowledge the most glaring problem with his effusive praise: the handpicked Guardian Council of Ali Khamenei removed almost 90 percent of the “moderates” from the ballot during the months-long vetting process.

The only candidates left on the ballot, especially outside of Tehran, were devoted and dedicated candidates solidly aligned with Khamenei, the ruling mullahs and Revolutionary Guards’ leadership.

Taking a few scattered wins in and around Tehran and calling it a “moderate” win is akin to Parsi’s previous arguments about the nuclear deal being a moderating force for Iran and the West, but in its aftermath the regime has conducted illegal missile tests, arrested scores of dissidents and journalists and stepped up its war in Syria.

The money line from Parsi is when he says “In order to avoid a hardline backlash, the moderation of Iranian policies need to happen at a moderate pace.” We can only assume Parsi thinks reform in Iran happens at a snail’s pace. For him and the rest of the Iran lobby, electing one moderate out of 12,000 thrown off the ballot would be considered “progress,” which is why his proclamation of moderates is so silly, especially when we consider that candidates backing Hassan Rouhani are dubbed “reformists” in a stretch of logic that hurts the brain when thinking about it.

Rouhani has turned into anything but a moderate. Rouhani’s sole purpose in being hand selected by Khamenei and all other candidates cleared from the field beforehand was to convince the West of a moderate image and secure a deal lifting crippling sanctions. In his tenure, he has instead presided over the highest increase in executions ever in Iran, cracked down hard on journalists and presided over three proxy wars in Syria, Iraq and Yemen in a show of extremist Islamic expansion that Mahmoud Ahmadinejad, his much-reviled predecessor, could only dream about.

The fact that Rouhani supporters could only win 30 seats in heavily populated Tehran and lose across the rest of the country indicates the usual pattern of deceit coming from the mullahs: Let the “moderates” claim a victory for global media consumption in Tehran, but dominate and assure control everywhere else in Iran.

The recipe for electoral success has worked since decades ago and has allowed the mullahs to play with the world, around their internal fighting. While the infighting is only about their share of power and both “moderates” and “Hardliners” are the same when it comes to executions, domestic repression, and their support for terrorism abroad. Take for instance the so called moderate Rouhani, the reign of executions under his watch has been much larger than his “hardliner” Ahmadinejad, and he and his Foreign Minister Zarif (Another person that is referred to as “moderate” within the mullah’s regime) have continuously expressed their support for the Syrian dictatorship, the Hezbollah and most extremist movements in Iraq and Yemen. Under Rouhani and his predecessors, virtually all legitimate dissident groups and political parties have long been outlawed and even the nascent Green Movement which was crushed in 2009 and was led by leaders arguably still cozy with the regime leadership has no recognition or legitimacy within Iran.

Add to that the contention by the Iranian regime that democracy was served by the participation of an estimated 33 million of Iran’s 55 million eligible voters and you find remarkable similarities with claims by other totalitarian regimes such as the old Soviet Union, North Korea and Nazi Germany in which near universal participation by the electorate was often forced and compulsory as was who to vote for. The Iranian regime is no different.

“Iranian voters delivered a strong message to the elite that political and social aspirations that have long been unmet need to be addressed more robustly,” said Reza Marashi, also of NIAC who claimed voters wanted change, even if it was exchanging one regime diehard for another.

Aaron David Miller, a vice president at the Woodrow Wilson International Center for Scholars, noted in an editorial in the Los Angeles Times that “none of this favors Iran’s pragmatists and centrists, let alone its reformers. In fact, as the International Crisis Group notes, in Iran historically ‘external loosening’ is balanced with ‘internal stiffening.’

“That is what happened after the 1988 cease-fire in the war with Iraq, and after the 2003 nuclear agreement with Britain, France and Germany, when the powerful Guardian Council disqualified reformist candidates in the next elections and conservatives regained their parliamentary majority. A step forward in a highly authoritarian and ideological system can easily produce a few steps back, or at least to the side,” Miller notes.

The Guardian, had similar takeaways in looking at the elections, including that there are no simple divisions of “moderates” and “reformists” since candidates were disqualified less on political views and more on devotion to the ruling mullahs.

In describing Rouhani, Gareth said “Iran’s president has proved himself an astute, hard-headed operator,” adding that “politically, Rouhani will need to maintain public support with an eye to being re-elected as president next year. Anecdotal reports of a lower turn-out in poorer parts of Tehran may reflect most strongly a wider sense among Iranians they are not benefiting from the easing of sanctions.”

While the Iran lobby may be praising this weekend’s election results, the reality of a rigged election means nothing really changed as most Americans tuned into the Oscars instead.