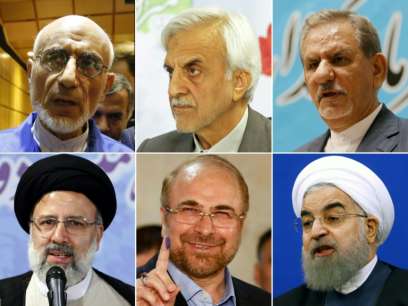 What do you get when over 1,600 candidates register to run for president in Iran?

You get just six guys on the ballot representing the absolute worst of the Iranian regime.

Democracy at work right? Only in Iran.

What is stunning about the electoral process in Iran is how the world’s news media tend to fall flat on their collective faces in covering it and missing the most important aspects. Namely that it is essentially a fixed race with no real dissenters allowed and only those candidates deemed to be the most loyal to the regime and its ruling mullahs, especially the guy at the top, Ali Khamenei.

News media fell over themselves announcing that 1,626 applicants registered, including 137 women; the highest number ever of female candidates to register since the Islamic revolution back in 1979.

Exactly how many women made the final ballot? Zero. Nada. Zip.

This is not earth-shattering news since the 12-member, all-male Guardian Council—half of whom are handpicked by Khamenei himself—was never going to approve a woman for the ballot, but is certainly happy to milk the publicity of having these many women register.

While the women who registered may have been making a statement and doing their best to protest the electoral process in the only meaningful way that won’t land them in Evin Prison or the gallows, the mullahs only see a PR opportunity in them.

According to The New Arab, Sha’la Tabrizi, who has a PhD in Political Science, was the first woman to register for this year’s presidential race.

“Women constitute 60 percent of Iranian society, so they should strive for one of them to become a powerful president some day,” she told local media, adding that she is aware of how bleak her chances are.

The Guardian Council has disqualified every female presidential candidate since 1979.

You do have to hand it to them for persistence.

It is not without irony that the most prominent female Iranian political leader is Mrs. Maryam Rajavi who leads the largest Iranian opposition group, the National Council of Resistance of Iran. If the regime were ever to allow her on the ballot, it is likely she might end up being the first female president of Iran.

The six candidates who did make it onto the final ballot are a who’s who of regime henchmen and brutal human rights abusers. The more serious choices that will probably make their way out of the election show are:

The inclusion of candidates such as Jahangiri and Hashemitaba are almost assuredly on the ballot to provide a perceived “balance” of “moderates” to “hardliners” even though they have no chance at winning.

The history of Iranian elections proves that with the rigged win for Mahmoud Ahmadinejad in 2009 that led to widespread protests and massive crackdowns.

This election will be no different since the Guardian Council have rendered the ordinary Iranian citizen’s vote moot with a slate designed to ensure only the most devout and devoted will be elected.

For most Iranians, already severely disillusioned by the unfilled promises of Rouhani, the best and most obvious choice on the ballot might be “none of the above.”