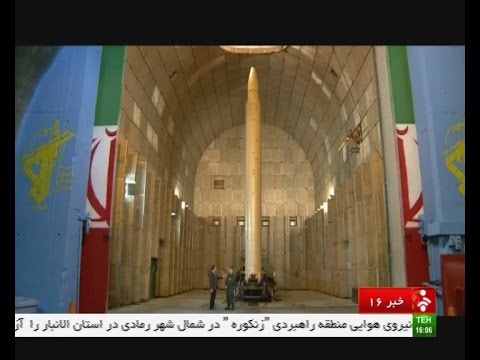 Iran, Its Missiles and the Failure of the Nuclear Deal

Ballistic missiles by definition are any kind of missile that achieves powered launch, an arching trajectory and then comes down on a target some distance away. Intercontinental ballistic missiles are ones with the extended range to reach targets outside of the launch area, often traversing into another continental mass or even hemisphere.

They are the most destabilizing and devastating weapons in any nation’s military and have been at the heart of nuclear arsenals since the dawn of the atomic age. Ballistic missiles were at the center of the Cuban missile crisis. The mere threat of ballistic missiles placed in Europe by the U.S. was enough to force landmark reduction treaties with the Soviet Union.

The development of nuclear missiles in North Korea poses one of the most significant threats in the Pacific today and sit at the center of the current crisis with the Iranian regime.

Because ballistic missiles are the primary launch platform for any nuclear, chemical or biological warhead, their development is often part and parcel of any nuclear agreement.

The SALT treaties between the U.S. and Soviet Union dealt not only with warheads, but most importantly launch vehicles. Both sides knew if you did not address the launch systems, simply reducing nuclear warheads would do nothing. Either nation could simply build new warheads and attach them.

Ironically, the nuclear agreement with the Iranian regime and the P5+1 group of nations pointedly excluded launch systems from the agreement. The silence of the agreement on missile development was a key component of efforts by the Iran lobby to push through a deal.

Groups such as the National Iranian American Council and Ploughshares Fund made the argument to the Obama administration that including launch systems would unnecessarily complicate talks and drive a deeper wedge in the “moderate” factions in Iran fighting for normalization with the West.

We know now through revelations in the New York Times that that argument was false. The leadership of the Iranian regime has no moderates within it. It’s a strict religious theocracy that demands absolute dedication and devotion to the Islamic revolution it spawned and has worked hard imprisoning, torturing and executing any dissenters to that vision.

It also fought hard to keep missiles out of the agreement because of its close and ongoing ties to the North Korean regime which has provided Iran with missile designs, launch motors, guidance systems, engineers and expertise in manufacturing under license. For Iran’s mullahs, losing this valuable chain of military supplies – one of the only few available to it illicitly for sophisticated weapons – would be a strategic loss.

For top Ali Khamenei and his handpicked team of Hassan Rouhani and Javad Zarif, preservation of missile technology was critical in maintaining the regime’s ability to project force outside of its borders. For the past three decades, Iran has had to rely on proxy terror groups such as Hezbollah, foreign fighters such as Iraqi Shiite militia and Houthis to project its power.

This is why the Iranian regime has ignored United Nations Security Council sanctions against missile development and fights against any restrictions on this technology. It serves the mullahs’ propaganda purposes to show off videos of missile test launches and underground bunkers filled with missiles; given them the appearance of a formidable military.

All of which explains why the Iranian regime continues to push messages through the Iran lobby to sow confusion in the West about the regime’s missile program.

Iran’s military recently publicized a third underground missile facility and showed the launch of a new ballistic missile through the top of a mountain.

U.S. intelligence agencies said in a recent internal report on the launch that the new underground missile facility was disclosed by Iran in March.

It was the third time since October that Tehran showed off an extensive network of underground missile facilities. The new video, however, for the first time shows a missile launch from one of the country’s underground launch facilities.

Even more startling were comments made by Amir Ali Hajizadeh, commander of the Revolutionary Guard Corps’ Aerospace and Missile Force, in recent remarks that the Obama administration does not want Iran to publicize its ongoing missile tests, which have raised questions about the regime’s commitment to the nuclear agreement.

“At this time, the Americans are telling [us]: ‘Don’t talk about missile affairs, and if you conduct a test or maneuver, don’t mention it,’” Hajizadeh was quoted as saying during a recent Persian-language speech that was translated by the Middle East Media Research Institute.

Ali Safavi of the Foreign Affairs Committee of the National Council of Resistance of Iran, a leading Iranian dissident group, warned against continuing to appease the Iranian regime.

“The United States and its European allies must abandon their policy of appeasement. What is needed is quite simply a policy that recognizes the facts: there are no moderates in the Tehran regime; it need not include direct military action against Iran, but it does need to be based on action, not simply harsh words, much less willful ignorance,” he said.

That fact was even more important when compared to news that Russian S-300 mobile anti-aircraft missile systems purchased by the Iranian regime have been installed at the Khatam al-Anbia base, which contains Iran’s entire air-defense system. This represents a serious commitment by the regime’s military to safeguard its missile force with its most valuable new military purchase.

This follows previous announcements that the Iranian regime was finalizing deals for another $8 billion in Russian military hardware, including the high-end Su-30 warplane, Yak-30 training aircraft, military helicopters such as the Mi-8 and Mi-17 and K-300 Bastion coastal defense systems.

Now comes news that the regime is in the midst of new negotiations with Russia to acquire advanced naval weapons and ships to improve its ability to project force into the Persian Gulf and the strategically vital Strait of Hormuz, which the regime has repeatedly threatened to close the past few months.

The nuclear deal has been a failure. The world should not compound it by allowing the Iranian regime to fully deploy its missile force.