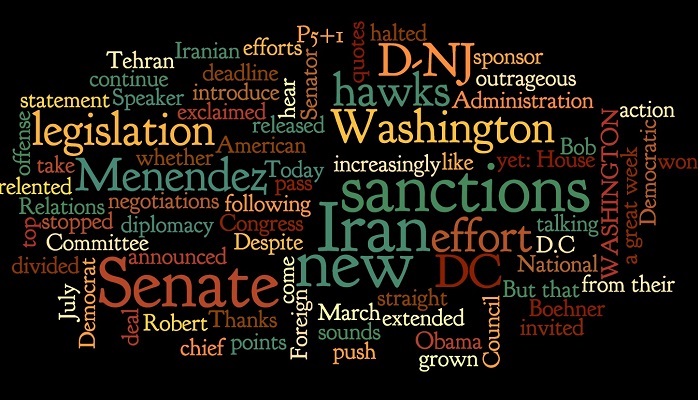 Containment Is the Third Choice In Dealing With Iran Regime

Yesterday we examined the histrionics of Trita Parsi, the head of the National Iranian American Council and lobbyist-in-chief for the Iran regime’s policies, including his principle argument that the only two choices facing us when it comes to Iran is peace through a nuclear deal or war through attacking Iran.

While Parsi harps on semantics of discussions being the basis of a change in Iran’s approach to the world, the track record of the mullahs hardly merits that. In fact, it’s worthwhile remembering why sanctions were imposed in the first place:

These sanctions did not come out of the blue or on a whim. They came as a direct response to provocative regime behavior and actions. Iran’s mullahs were the ones that brought these responses onto themselves and contrary to what Parsi would have people believe those sanctions were self-inflicted by Iran.

Nowhere is that more evident than in how Iran sought to keep its nuclear program secret and only with Iranian dissident and resistance groups and the work of International Agencies were many of Iran’s secret nuclear sites revealed, including:

The facts are that containment of the Iran regime had been working. The regime was cut off from financing and was bleeding mountains of cash because of its expenditure of arms and men in supporting religious wars in Syria, Yemen and Iraq.

Discontentment ran deep within the Iranian people who rose up in protests over presidential elections in 2009 and most recently in mass demonstrations by teachers, ethnic minorities and young people over a plummeting economy and harsh human rights repression.

The time was ripe for regime change and under the pressure an effective containment strategy brought to bear on the mullahs, real change was within the grasp of the P5+1 group of nations and they let it slip away.

As Mrs. Maryam Rajavi, leader of the National Council of Resistance of Iran, said in response to the lost opportunity:

“Had the P5+1 been more decisive, the Iranian regime would have had no choice but to fully retreat from and permanently abandon its efforts to acquire nuclear weapons. Specifically, it would have been compelled to halt all uranium enrichment and completely shut down its bomb-making projects,” Mrs. Rajavi said.

But nothing better illustrates Parsi’s snarky view of the concerns over Iran’s brutal suppression of women, young people, Christians, Kurds and many others than this tweet he sent out:

While Iranians languish in prison, Americans are held without trial, Iranian militia fight in three wars and millions of refugees are displaced by them, Parsi tweets about pistachios. It is ample proof of the fool he has become and the lackey he is.