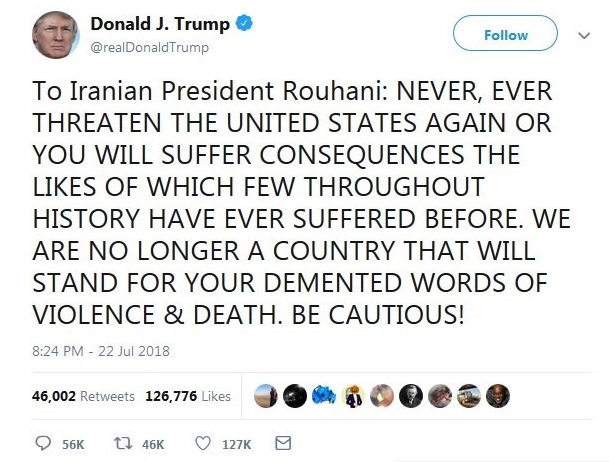 Last weekend, Hassan Rouhani after delivering a speech warning the U.S. of starting the “mother of all wars” President Trump locked his ALL CAPS key and threatened the Iranian regime with destruction if it ever attacked the U.S. And as some put it the world’s blowhards and fanatics have finally met their verbal match.

Lobby members such as the National Iranian American Council were especially vocal in trying to flood news outlets with statements all blasting the Trump administration for the tough stand against the mullahs.

Jamal Abdi, the incoming head of the NIAC, issued a statement that was hard pressed to find new harsh adjectives to use against President Trump.

“The Iranian-American community was deeply disturbed by Trump’s warmongering last night. When Donald Trump threatens that Iran will suffer the consequences that few in history have ever suffered before, Iranian Americans fear that this unhinged President will follow through on his threats to bomb our friends and family,” Abdi said.

“It is past time for our elected officials to step up and ensure that Trump cannot launch a disastrous war of choice based on his deranged tweets and foolish advice of officials who have been pushing to bomb Iran for decades. The Iranian-American community will not sign up for Trump’s war push, and will push back more than ever to restrain this President,” he added.

Abdi neglected to differentiate that the president’s tweets were in response to Rouhani making threats in the first place. He also neglected to mention the wave of protests spreading across Iran since last December aimed at the mullahs and their corrupt rule.

The same Iranian-Americans Abdi claims who are fearful of the president’s policies are in fact the ones who are nervously talking to relatives in Iran who are subject to mass arrests and imprisonment for committing “crimes” such as taking part in a peaceful demonstration for not receiving their paychecks for months, for not having drinking water, and for the nationwide poverty as a result of the government’s corruption and wasting all resources to prop up Assad’s dictatorship in Syria and to support other terrorist groups such as the Hezbollah in Lebanon and the Houthis in Yemen.

But the NIAC’s fusillade didn’t stop with Abdi, as Trita Parsi weighed in with his own diatribe on CNN in which he outlined why he believed any pivot to diplomacy similar to what President Trump did in North Korea was likely to fail with Iran.

Parsi’s arguments ring hollow as he skips over inconvenient truths and glosses over the hard reality of dealing with a religious theocracy hellbent on maintaining its grip on power no matter the cost in lives.

For example, Parsi claims that North Korea and Iran are entirely different situations because of the geopolitics of their neighbors. In this Parsi is correct to a point. While North Korea is surrounded by countries eager to use diplomacy as a tool such as China, Japan, and South Korea, Iran is surrounded by countries it has actively tried to destabilize with military action and proxies such as Syria, Afghanistan, Iraq, Yemen, Saudi Arabia, Lebanon and the Gulf States.

By comparison, if North Korea sent special forces into Japan or built explosives to be used by terrorists in China, the “diplomacy” Parsi so craves would never take place.

Parsi goes to explain that economic sanctions didn’t force Iran to the negotiating table, it was only after the Obama administration caved and granted the concession for Iran to continue enriching nuclear materials. Again, Parsi mistakes the concession of proof that diplomacy works, when in fact the lesson is that the Iranian regime is only interested in getting its own way and will not bend.

It is precisely why President Trump’s hardline approach to Iran is the cold, shock of reality the mullahs are afraid of because they know they will not be able to bully him as they did with Obama.

Parsi’s claim also that North Korea is a one-man show and Iran has a complicated political situation is laughable. Iran is a one-man country, ruled by Ali Khamenei. The only complicated factor is the web of financial ties, payoffs, and graft that ties the clerics, army, and bureaucracy to Khamenei.

Iranian regime’s solution to in-fighting is as simple as North Korea’s: arrest any dissidents and hang them.

Lastly, Parsi claims that all the Trump administration wants is a war – all evidence to the contrary – and its cabinet members are working towards that goal. The narrative that the Iranian lobby keeps pressing for in order to divert the attention from the fact that it’s the malign activities of the Iranian regime that is being reciprocated with a firm response.

Parsi forgets to mention how President Trump flogged his Republican opponents in the election over the ill-fated decision to invade Iraq and how he has openly opposed U.S. military commitments abroad; even questioning the role of NATO much to the consternation of European allies.

Far from a war hawk, President Trump has openly called on the Iranian people to lead a push for democratic change.