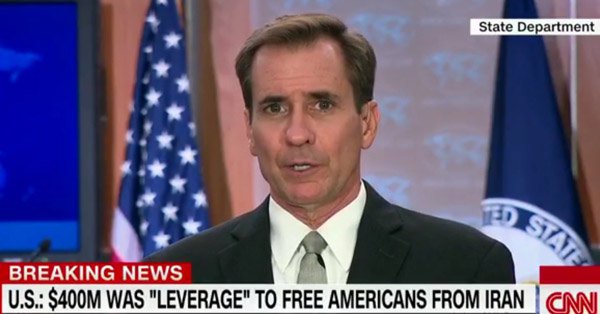 The “echo chamber” created by the Obama administration to help push through passage of the badly flawed Iran nuclear deal has beat the drum repeatedly in efforts to defend the deal in the face of growing and incontrovertible proof that all of the assumptions of the Iran lobby have been proven false.

The revelations of the falsehoods surrounding the Iran lobby’s participation in that now infamous echo chamber have almost become legendary:

In each case, the Iran lobby has sought to assure the world of the good intentions of the Iranian regime, only to have those assurances fall flat in the face of new regime transgressions, but for the Iran lobby the battle being waged by its members is the battle of public perception.

It serves the purposes of the mullahs to have the perception there is a chance for moderation, rather than actually delivering any.

Nothing illustrates that point more than the controversy over the $400 million cash payment made by the Obama administration in what appeared to be linkage for the release of several American hostages.

Even though the Iran lobby remained relatively silent on the issue, “echo chamber” participants such as Weiner made a strong case for denouncing any link of cash for hostages. Of course, the Iranian regime did nothing to steer speculation away from that scenario; with various regime officials all but boasting of how the Islamic state cowed the U.S. and forced it to pay it millions of dollars.

Even though the Obama administration at first vigorously denied any connection, the issue was never what the administration thought, but what the regime thought since if the mullahs indeed believed this was a straight cash for hostage swap, it would only serve to validate their belief that this was a sound policy to pursue in advancing the goals of the regime.

That much was true when the Obama administration finally admitted the other day that the $400 million ransom payment was held up until confirmation of the hostages’ release and flight back home, thereby validating the use of the money as leverage tied directly to the hostages’ plight.

For months the Obama administration had maintained that the payment was part of a settlement over an old dispute and did not amount to a “ransom” for the release of the Americans. Instead, administration officials said, it was the first installment of the $1.7 billion that the United States intends to pay Iran to reimburse it for military equipment it bought before the Iranian revolution that the United States never delivered.

But at a briefing on Thursday, John Kirby, the State Department spokesman, said the United States “took advantage of the leverage” it felt it had that weekend in mid-January to obtain the release of the hostages and “to make sure they got out safely and efficiently.”

According to the New York Times, the acknowledgment by Kirby on Thursday touched off a torrent of criticism from Republicans.

Iranian regime press has described the payment as a ransom — which fits Tehran’s narrative that it has outmaneuvered the Obama administration.

Kirby conceded that while the deals were negotiated separately, the timing of the final transactions was linked. “As we said at the time, we deliberately leveraged that moment to finalize these outstanding issues nearly simultaneously,” he said.

The Wall Street Journal editorial board took a harsh tack with the ransom payment, saying the Obama Administration’s handling of the Iran ransom-for-hostages story brings to mind the classic Chico Marx line in the movie “Duck Soup”: “Who are you going to believe—me or your own eyes?”

“Mr. Obama, meanwhile, spent August denying that a ransom was a ransom. Since the January “leverage” moment, Iran has taken three more Americans as hostage and is now demanding the return of $2 billion in funds that U.S. courts have ordered held for the victims of Iranian-sponsored terrorism. The eyes of the world can simply stare,” the Journal added.

The campaign to pass this ill-fated nuclear deal has also been undergoing even more scrutiny with disclosures that Ploughshares Fund sought $750,000 from billionaire financier’s George Soro’s Open Society Foundation to pay off “experts and validators” to vouch for the nuclear agreement.

The disclosure of the Ploughshares request shines further light on backroom efforts by the White House and its top allies to create what they called an “echo chamber” to galvanize public support for the nuclear deal with Iran.

According to the Washington Free Beacon, one foreign policy consultant who has worked intimately with Congress on the Iran deal said that the Ploughshares funding request is further proof that the White House’s efforts were well funded and highly influential.

“You couldn’t turn around last summer without bumping into some Iran deal booster complaining about all the money that skeptics were spending,” the source said. “Now we find out that the architects of the Iran echo chamber were soliciting hundreds of thousands of dollars from dark money groups to pour into manipulating the media and pushing fabricated experts into the mainstream.